Twin bombs at Coptic Orthodox cathedrals in Alexandria and Tanta exploded on Palm Sunday, April 9, 2017, killing 47 and injuring up to 113. The Islamic State in Egypt claimed the attack, which occurred less than five months after the bombing at St. Peter and St. Paul Coptic Orthodox Church, an attack that left 28 dead and was also claimed by the group. The Alexandria attack targeted St. Mark’s Cathedral, the traditional seat of Christianity in Egypt where Coptic Orthodox Pope Tawadros II was leading worship; he was uninjured in the blast.

Sectarianism is a longstanding problem in Egypt, and the past several months have proven more deadly than usual due to increasing sectarian terrorist violence. This year so far, 60 have been killed in sectarian violence both by the Islamic State in Egypt as well as other non-state and non-affiliated perpetrators, including the murders of six Christians in separate incidents in Alexandria, Assiut, Cairo, and Menoufia; the killing of seven Christians in a spate of incidents in North Sinai, leading Christians to flee the city in large numbers; and the twin bombings on April 9. 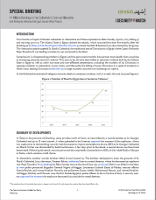