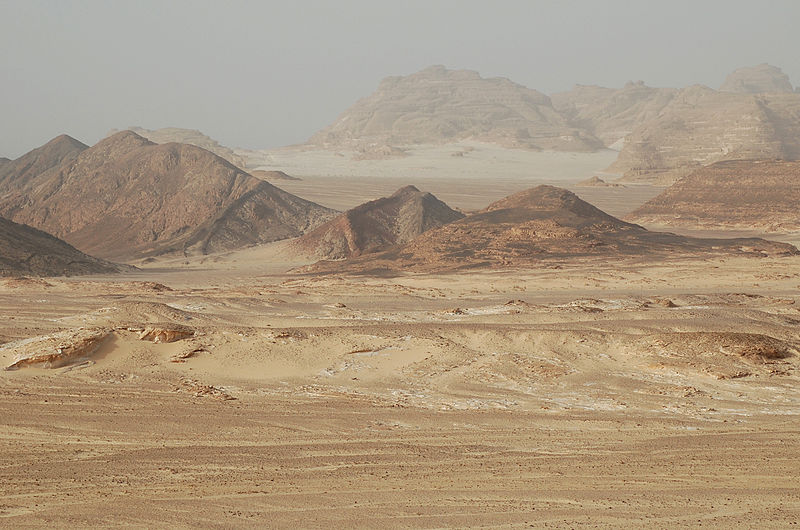 In the last four weeks, seven Christians have been killed in the city of Arish in North Sinai, changing the nature of violence in Sinai that has recently found a home in and around Arish, North Sinai’s capital city. The crimes have involved the kidnapping, execution, and the burning alive of local Christians in Arish, and the displacement of up to several hundred who have fled to Ismailia, a city along the Suez Canal, and other places in Egypt. The Islamic State in Sinai, commonly known as Wilayat Sinai, claimed responsibility for the deaths of these seven Christians. Wilayat Sinai (formerly known as Ansar Bayt al-Maqdis) had previously focused its attention primarily on Egypt’s security forces and, more recently, civilians accused of collaboration with security. The recent, brazen sectarian attacks are a disturbing development.

Some sources have indicated that security forces launched operations in Arish and informed Christians to flee the area; other sources reported that the military forces turned over areas of Arish to police control. North Sinai has been under the primary control of the military in the past years due to the ongoing insurgency there. Emergency law, which dictates stringent curfews and restrictions on movement, has been in place since October 25, 2014. Despite these security measures, and despite growing security concerns for Christians (even well before the 2016 church bombing in Cairo by the Islamic State, dating back to the 2015 displacement of Christian families in Rafah and the 2013 spike in terrorist attacks in Sinai) these attacks transpired quickly.

The Coptic Orthodox Church condemned the attacks, saying that they are aimed at dividing the country and being driven by imported terrorism from outside Egypt. No government entity has issued a statement and according to some reports, government officials did not agree to provide housing for the displaced Christians fleeing Arish until pressure on social media. On February 26, Health Minister Ahmed Emad Radi accompanied a medical convoy to Ismailia to provide medical supplies and assistance for the displaced families.

To examine the events, causes, and responses that surround these attacks, the Tahrir Institute for Middle East Policy has developed this special briefing, a joint product of TIMEP’s Eshhad and Egypt Security Watch projects, as we have with other events and trends. This report details the developments over the past weeks and months, analyzes the causes and implications for sectarianism and extremist violence in the country, and concludes with a set of immediate and long-term recommendations to prevent similar tragedies in the future.

So far this year, 13 Christians in total have been killed in Egypt, many of them in execution-style murders. Last year in 2016, up until the bombing at St. Peter and St. Paul Coptic Orthodox Church on December 11, 2016 that killed 28, only eight deaths were recorded. The bombing, one of the deadliest attacks in Egypt in recent years, was eventually claimed by the Islamic State in Egypt (a separate entity from Wilayat Sinai), marking a shift toward the targeting of explicit sectarian targets. Following the bombing of St. Peter and St. Paul, Eshhad and Egypt Security Watch wrote that the attack was “the first large-scale sectarian attack in Egypt by the Islamic State, which had avoided explicit sectarian targets and rhetoric until the July killing of a priest and later a Sufi sheikh, both in North Sinai.”

The increasingly dangerous sectarian rhetoric by the various branches of the Islamic State in Egypt is further evidenced by the release of a video published on February 20, 2017, vowing to wipe out all Christians in Egypt. The video included a conglomeration of news clips, purportedly showing Christian leaders criticizing Islam and Judge Emil Habashi Malika Abdel Messieh, a Christian, sentencing 14 alleged jihadists to death; the defendants were convicted of forming terrorist group Tawhid wal-Jihad, attacking police and military forces, and killing two police officers, a military officer, three soldiers and a civilian in Sinai in 2012. The video further alleged that Christians are in control of the economy, judiciary, and the media, and threatens to invade Cairo to liberate the city and release Islamist prisoners.

In Sinai, Christians lack tribal protection and influence, as anyone inevitably does when relocating to the tribal society from other provinces in Egypt. Ibrahim Ishak recently reported to Mada Masr that this lack of local protection makes Christians particularly vulnerable. This is aggravated by views that minorities and other Egyptian migrants are competing with locals for the already sparse economic opportunities. Since August 2013, there have been several intermittent attacks on Christians, normally against priests or traders. This escalated in February 2015 when up to 27 Christian families left Arish, and many others left other cities in North Sinai including Rafah and Sheikh Zuweid.

This rise in sectarian killings since the start of the year, which was heralded by the deadly bombing in Cairo, has not been limited to North Sinai. There have been five other victims in different provinces who were killed in their beds and homes, and in one case a store. Further investigation by local police and prosecution in four of the five cases have led to the arrest of seven people in Menoufia, Matruh, and Cairo, and in Alexandria the sentencing to death of defendant Adel Soliman. A majority of these cases were linked to theft and burglary of the victims, facts that do not so far parallel the Arish situation.

This killing of Christians in Arish comes at a time when the capital of North Sinai is facing significant unrest. Wilayat Sinai has continued to wage a deadly insurgency against security personnel over the past several years. The organization has proven durable in the face of the army’s brutal counter-terrorism campaign, inflicting heavy casualties and even briefly holding Sheikh Zuweid in July 2015. According to data collected by TIMEP’s Egypt Security Watch, Wilayat Sinai claimed 34 attacks per month on average in North Sinai throughout 2016. Over that same period, more than 420 security personnel and 53 civilians were reported either killed or injured in attacks claimed by the group in Sinai.

Wilayat Sinai had primarily operated in the northeasterly areas of North Sinai, particularly in the villages between Shiekh Zuweid and Rafah, especially Moqataa and Mehdiya. Yet, as wide ranging security campaigns that have killed an alleged 2,214 “terrorists” and the mass displacement of residents in these areas have been trumpeted as successes by the Egyptian military, Wilayat Sinai has been increasingly present in the areas to the west (see chart of attacks in Arish).[1] Wilayat Sinai militants recently distributed pamphlets warning citizens to avoid security checkpoints, police stations or military bases. Wilayat Sinai’s Hisba (morality police) also recently stopped a bus full of teachers in Rafah and threatened retaliation if they went to work without a male relative or without wearing a veil. 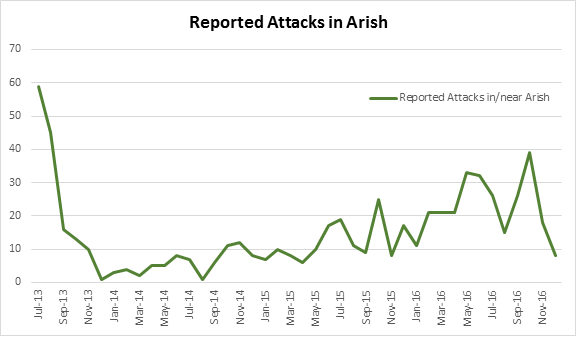 The city of Arish is increasingly a focal point of the ongoing insurgency, experiencing near-daily terror attacks and counter-terrorism operations, often creating dangerous living conditions on locals as well as alienating civilians from government security forces. In response to a January 2017 attack on a checkpoint that killed eight policemen, security forces conducted a raid that killed 10 of the alleged perpetrators. The men’s funeral evolved into a large public demonstration, and a number of local tribes announced a civil strike, denying that those killed were affiliated with Wilayat Sinai and claiming that they were taken from their houses by the police several months prior.

The increasing levels of sectarian violence in Sinai raise serious concerns and indicate an apparent shift in sectarian intent by the Islamic State in Egypt, Wilayat Sinai, and potentially other violent actors. Additionally, sectarianism in Egypt continues to be supported by the legal infrastructure in the country, ineffective responses to violence against minorities, and a thriving culture of impunity. Additionally, security breaches leading to violence against minorities contribute to the growing security threats facing the country. Any response from the government should necessarily include prioritizing the protection of minorities in Arish, a long overdue action.

Despite the fact that North Sinai, including Arish, has been under military rule and emergency law, the military (and a police force disempowered by the military rule coupled with the constant attacks against them) failed to prevent these attacks, some of which happened in broad daylight. These attacks also come on the heels of increasing sectarian rhetoric by the Islamic State in Egypt and Wilayat Sinai. The enduring military campaigns in the eastern region of Sinai, including the buffer zone in Rafah and the aerial campaigns in Moqataa and Mohdiya, have appeared to serve as a means to drive terrorists into more the populated area of Arish. Despite claims by the Egyptian government that many of the terrorists in Sinai have been killed, any jihadi presence, even if it is numerically small, has a devastating impact on to the local communities, particularly when coupled with military campaigns that have had a disparate impact on civilians.

Until now, the government’s response to this growing crisis has been inadequate as evidenced by the inconsistent instructions and provision of necessities to the victims of this violence. In some cases, individuals were instructed to leave Arish; however, the government did not provide them with necessary housing until pressured on social media. Regardless of the government’s provision of housing, removal of Christians in Sinai (there were a reported 5,000 Christians in Sinai prior to the 2011 revolution; there are now believed to be less than 1,000) is not a solution. Rather, the government response to terrorism in Sinai, to be effective, must provide protection and stability while complying with the rule of law by avoiding extrajudicial killings of alleged terrorists and conducting fair and free trials investigations and prosecutions of criminals.

The local communities in Sinai have endured prolonged instability and inappropriate government responses, as evidenced by the strike that local tribes announced in response to the killing of 10 locals. The events are particularly detrimental as it is civilians in North Sinai who provide the most valuable security asset, as they may collaborate and provide critical intelligence about the militants that increasingly threaten their safety. Security forces’ extrajudicial killing and the failure to meet demands or make any efforts to appease the local population will clearly only discourage any kind of conciliation with the security forces and may well risk driving such critical intelligence support away. The prolonged conflict in Sinai and the alienation of the locals as a result has additionally allowed an already vulnerable minority population to become the explicit targets of sectarian killings and forcing many families to be internally displaced to other areas of the country.

This brief will be updated periodically with future developments.

[1] The reports of attacks represented by the chart are not necessarily exclusively in Arish, but may have occurred in the area in or near Arish, as Arish is often used as a reference point for attacks carried out in nearby villages.