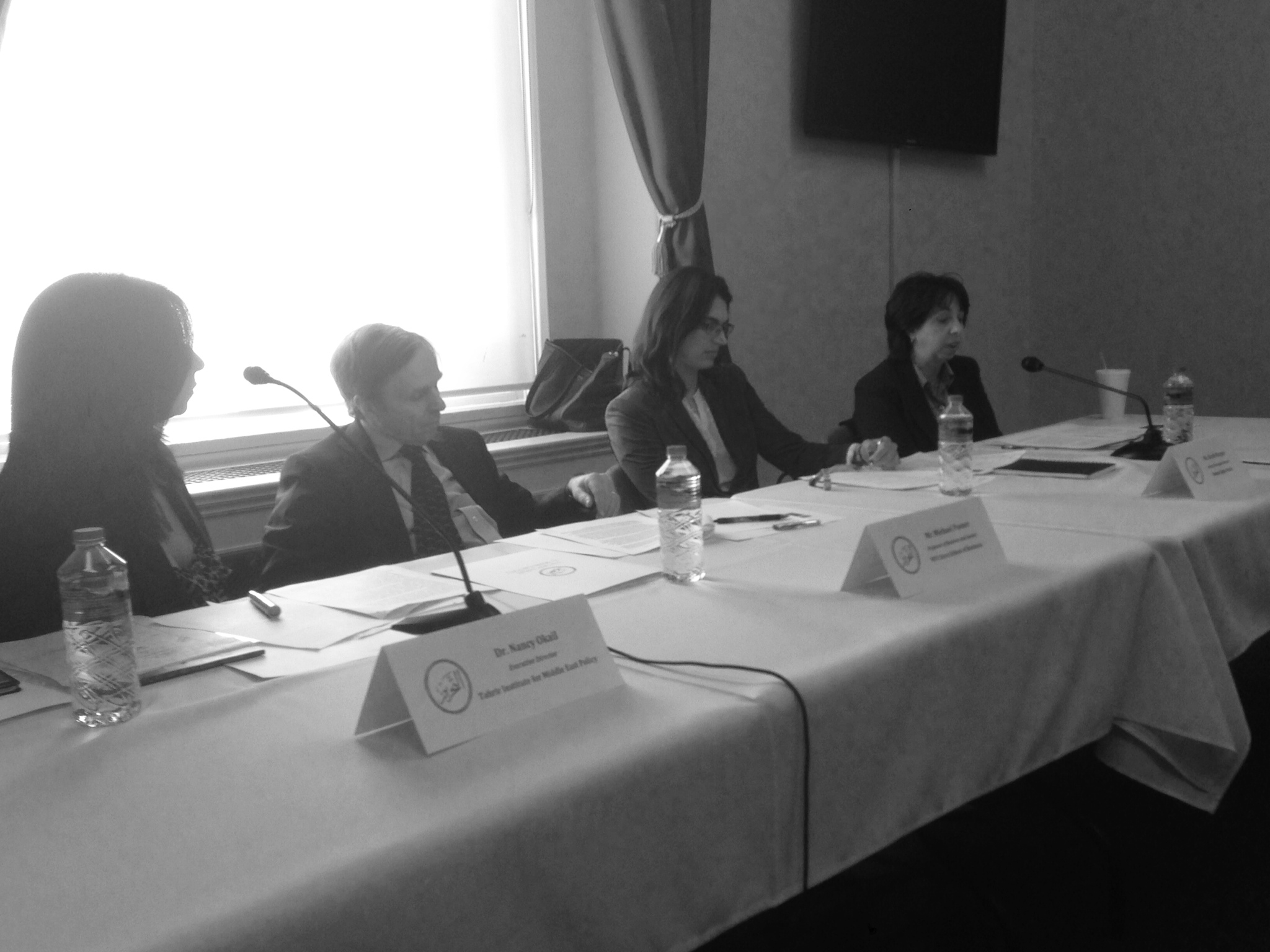 The Tahrir Institute for Middle East Policy (TIMEP) welcomed policymakers and civil society groups to its first briefing on Capitol Hill on April 10, 2014. The event featured a distinguished panel of experts well-known within the human rights and foreign policy fields who came together to discuss the issue of U.S. policy toward Egypt in advance of upcoming elections.

During the briefing, panelists addressed a number of issues that have come up in U.S. policy discussions in recent months, including: U.S. aid to Egypt; the Egyptian government’s commitment to a democratic transition; the cohesiveness of the Obama administration’s policy toward Egypt; and the social, security, and economic challenges that Egypt’s new president and parliament will face. In commenting on those issues, panelists offered several policy recommendations to congressional and executive branch staff in attendance at the event.

The panel began with an introduction by Dr. Okail that touched upon the challenges and complexities of the situation in Egypt. Dr. Okail also raised concerns about the self-limiting perspectives often offered on events in Egypt that present the Muslim Brotherhood and the military as the only actors in the country, noting that such analysis necessarily denies the will and agency of the Egyptian people.

There was general agreement among the panelists that the U.S. government should put human rights at the core of U.S. policy toward Egypt. Along those lines, panelists recommended that the U.S. government: press Egypt to cease the use of excessive force against peaceful protesters; release prisoners of conscience; end the harassment of activists, journalists, and NGO workers; protect the constitutionally-guaranteed rights to freedom of expression, association, and the press; and ensure that upcoming elections are free, fair, and inclusive.

Regarding U.S. aid to Egypt, panelists agreed that the United States should make it clear that Egypt’s human rights record is moving in a negative direction. In particular, Ms. Margon recommended that Members of Congress ask “tough questions” of U.S. administration officials about the criteria that will be used to determine whether Egypt is “taking steps to support a democratic transition” (as required by the 2014 Consolidated Appropriations Act).

Mr. Posner acknowledged that Egypt faces real security challenges associated with ongoing terror attacks and bombings not only in the Sinai Peninsula but also in major cities. He noted that it is inaccurate, though, to present a false choice between addressing national security interests and protecting human rights.

Looking ahead, members of the panel said that the administration should adopt long-term strategies to support Egyptian civil society so that Egypt has a chance of succeeding as a democratic state. The United States should also find creative ways to support Egypt’s economic development—an important factor in ensuring lasting stability.

The informative discussion and detailed recommendations offered by event participants will be particularly relevant as the U.S. State Department monitors Egypt’s support for a democratic transition and as the U.S. Congress takes up funding legislation for fiscal year 2015 over the next few months. The issues addressed will likely remain at the forefront of U.S.-Egypt policy discussions as Egyptians undertake to elect a new president and parliament this year.