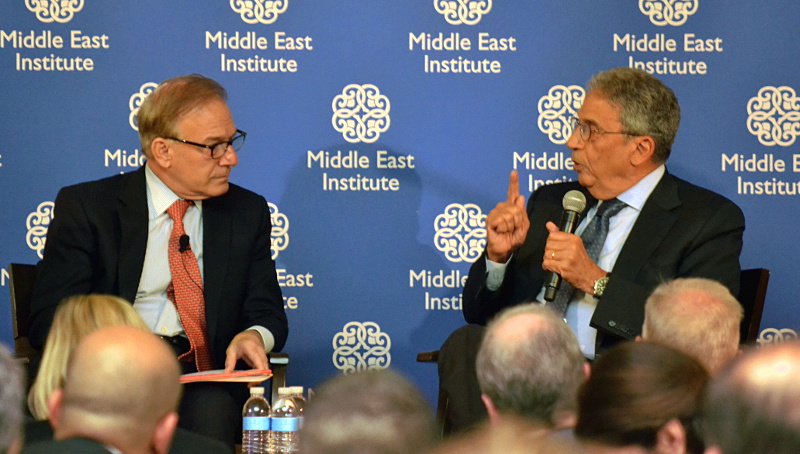 On Tuesday, May 6, 2014, the Tahrir Institute for Middle East Policy (TIMEP) partnered with the Middle East Institute (MEI) to host distinguished guest Mr. Amr Moussa. Mr. Moussa is a veteran Egyptian politician and diplomat; he served as the Egyptian Minister of Foreign Affairs from 1991 to 2001 and subsequently the Secretary General of the Arab League from 2001 to 2011. Mr. Moussa spoke to a full audience at the Mayflower Hotel, and his remarks were moderated by Mr. David Ignatius, foreign affairs columnist at the Washington Post.

The event began with a seated lunch, and the conversation was opened with remarks from Ambassador Wendy Chamberlin, President of the Middle East Institute.

Over the course of the conversation, Mr. Ignatius and Mr. Moussa discussed Egyptian presidential hopeful Abdel-Fattah El Sisi’s campaign and Mr. Moussa’s view of Sisi’s political platform, with which he has intimate experience as advisor. Mr. Moussa underscored Sisi’s commitment to establishing a secure environment that takes a hard stance against the threat of terrorism and maintained the candidate’s commitment to respecting Egypt’s constitution.

Mr. Moussa explained, “We should expect a firm president, [operating] within the confines of the Constitution.”

The conversation was followed by a lively question and answer session, covering the topics of detained journalists in Egypt, the April 6 Youth Movement, the military’s involvement in politics, regional politics, and protecting dissent in the country.

A full transcript and video of the event is available the Middle East Institute’s website.