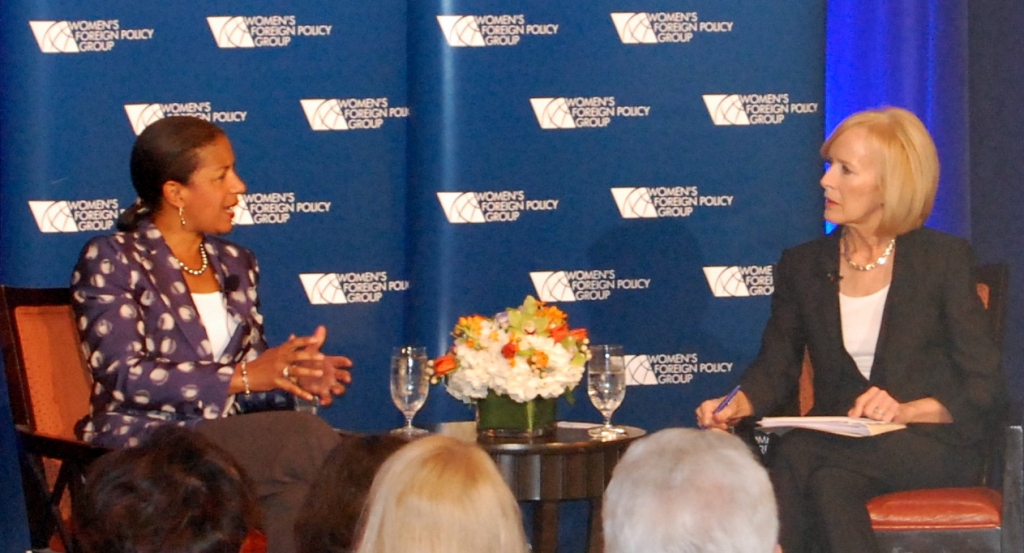 The Tahrir Institute for Middle East Policy (TIMEP) was honored to support the Women’s Foreign Policy Group (WFPG) as a co-sponsor of its May 14 luncheon celebrating women leaders in foreign policy and honoring National Security Advisor Susan Rice. Ambassador Rice received the WFPG “Celebrating Women Leaders” award for being a role model and encouraging more women worldwide to be part of foreign policy.

The luncheon, moderated by PBS NewsHour co-anchor and managing editor Judy Woodruff, was well attended by ambassadors, diplomats, the Foreign Service corps, non-profit organizations, and other guests. During the discussion, Ambassador Rice answered a range of questions from Woodruff and the audience regarding the major security concerns facing the United States today in Europe, the Middle East, Africa, and Asia.

Ambassador Rice particularly elaborated on the nature of U.S. activities related to currently unfolding international crises. She began by commenting on the over 200 Nigerian school girls who were recently kidnapped, confirming that “the United States is very actively involved. We have a team of up to 30 people on the ground cooperating very closely with the Nigerian government…and [the United States] is also applying aerial assets, including manned and unmanned aircrafts, to do what we call intelligence, surveillance, and reconnaissance over this large area to maximize the resources to locate the girls….”

Speaking on the crisis in Ukraine, Ambassador Rice said, “Let’s be clear: what happened in Crimea is completely illegitimate, and nobody in the international community gives that any credence, that itself is something we need to be firm about and recognize that there are costs that already have been imposed for the illegal annexation of Crimea…. We have been very clear, if the Russians move forces in or take actions that destabilize the [upcoming] elections such that they can’t be held in a credible fashion…[that will push] the United States, Europe and many of our partners [to] trigger much more significant sanctions [against Russia].”

Commenting on Syria, Ambassador Rice stated that she and President Obama met with the Syrian opposition leaders to hear what they “want from the United States and the international community.” She added that “what they explicitly do not want is U.S. military or foreign military intervention, what they do want is increased support to the vetted moderate opposition, which is exactly what we’re doing.” Ambassador Rice also spoke on the global perception of the United States, commenting that “the United States is very much viewed in [a] positive light in [many parts of the world].” In her closing remarks, Ambassador Rice was asked what advice she would give to young women who are thinking about making a career in foreign policy—her succinct response: “Do it.”

TIMEP is committed to amplify marginalized voices, particularly those of women throughout the Middle East, and we are pleased to further promote women’s leadership, engagement, and visibility in international affairs through our support of this luncheon.

To view the full remarks of Ambassador Rice, please follow this link.