In December 2018, Sudanese protesters took to the streets to demonstrate against a cut to bread subsidies in what ultimately became a nationwide, peaceful movement calling for the end of Omar al-Bashir’s regime. In January 2019, civil society organizations led by the Sudanese Professionals Organization signed the Declaration of Freedom and Change, establishing the Forces for Freedom and Change coalition to represent the protest movement. Following months of demonstrations, the military seized power from al-Bashir on April 11, 2019. Protesters and organizers on the ground continued to call for civilian-led, democratic rule. On June 3, 2019, armed forces carried out a massacre of demonstrators, which mobilized protesters even further until the Transitional Military Council finally agreed to share power with the Forces for Freedom and Change on July 5, 2019.

In the weeks thereafter and following international mediation, the Transitional Military Council and Forces for Freedom and Change negotiated the Draft Constitutional Charter of 2019 and signed the document on August 17, 2019. Soon after its formation, the civilian-military government entered into peace talks with several rebel factions. On October 3, 2020, the parties signed the Juba Peace Agreement, which amended the Charter and incorporated rebel leaders into the transitional coalition. The Draft Constitutional Charter, as amended, serves as Sudan’s interim constitution and roadmap for the country’s transition.

Legislative Authority in the Hands of the Executive

Article 25(1) of the Draft Constitutional Charter stipulates that a Transitional Legislative Council is to serve as Sudan’s legislature for the 39-month transitional period. Article 24(4) sets a ninety-day deadline for the formation of the Council. However, in October 2019, that deadline passed; and following repeated delays, the Council still has not been created. As a result, the Sovereignty Council and Cabinet, which together serve as the current executive branch, also control Sudan’s legislative authorities.

The Cabinet comprises up to 20 ministers and the prime minister. The 14-member Sovereignty Council is composed of five civilians from the Forces for Freedom and Change coalition, five military leaders from the Sudanese Armed Forces and Rapid Support Forces paramilitary, one member approved by both civilian and military authorities, and three rebel leaders incorporated pursuant to the Juba Peace Agreement. The chair, General Abdel Fattah al-Burhan of the Sudanese Armed Forces, serves as the head of state. General Mohamed Hamdan Dagalo (known as Hemetti) serves as deputy chair and is a commander of the Rapid Support Forces paramilitary that has been implicated in war crimes in Darfur. Despite promises to select a second civilian deputy, one has not been announced.

In the absence of a legislative body—as is currently the case—the Sovereignty Council and Cabinet are to jointly adopt the Transitional Legislative Council’s authorities, pursuant to Article 25(3) of the Draft Constitutional Charter. The process for drafting and approving laws is as follows: First, the ministry with jurisdiction over the relevant area of law drafts and sends it to the Ministry of Justice for revisions. The legislation is then referred to the Cabinet. The Cabinet then has sole authority to introduce draft laws for consideration before a joint session of the Cabinet and the Sovereignty Council. This joint session then debates the proposed legislation and enacts it with a vote by consensus or, in the absence of consensus, a two-thirds supermajority under Article 25(3) of the Draft Constitutional Charter. The process, in practice, has lacked transparency as debates are not publicly broadcasted and draft bills are rarely shared with the general public.

An Absence of Constitutional Review

Designating separate and complementary authorities to the executive, judicial, and legislative branches contributes to a system of checks and balances. The separation of powers allows each branch of government to contribute to building a system of governance in an institutionalized and transparent process, preventing any branch from amassing excessive power and encouraging mutual accountability between governing bodies.

However, the failure of Sudanese authorities to create the necessary legislative and judicial bodies stipulated by the Draft Constitutional Charter has resulted in the concentration of legislative power in the hands of two executive bodies and in the absence of constitutional judicial review.

Executive control of legislative power should be temporary, limited in scope, and severely restricted, because the executive bodies are not necessarily trained in or equipped to draft the laws that could be foundational during a period of transition. The executive power also represents a different set of interests, both by design and in light of the significant military representation built into the Sovereignty Council. The current situation puts Sudan at risk of seeing laws passed that improperly concentrate control in the hands of the executive, that arbitrarily restrict citizen rights, and that fail to take the necessary steps toward progress in the transitional plan—be it the creation of necessary bodies or the eventual administration of elections.

Furthermore, there is no shortage of constitutional concerns in the transition process, during which a  Constitutional Court is necessary to play a central review role. Prominent political figures have, for example, questioned the constitutionality of key government decisions, such as the Juba Peace Agreement’s constitutional amendments and the formation of the Council of Partners for the Transitional Period, an extra-constitutional executive body with heavy military representation.

Looking ahead, it will be essential to monitor how the executive branch implements its legislative authorities and what steps it takes toward creating the bodies and mechanisms necessary to realize a transparent, accountable, and just system built on checks and balances. 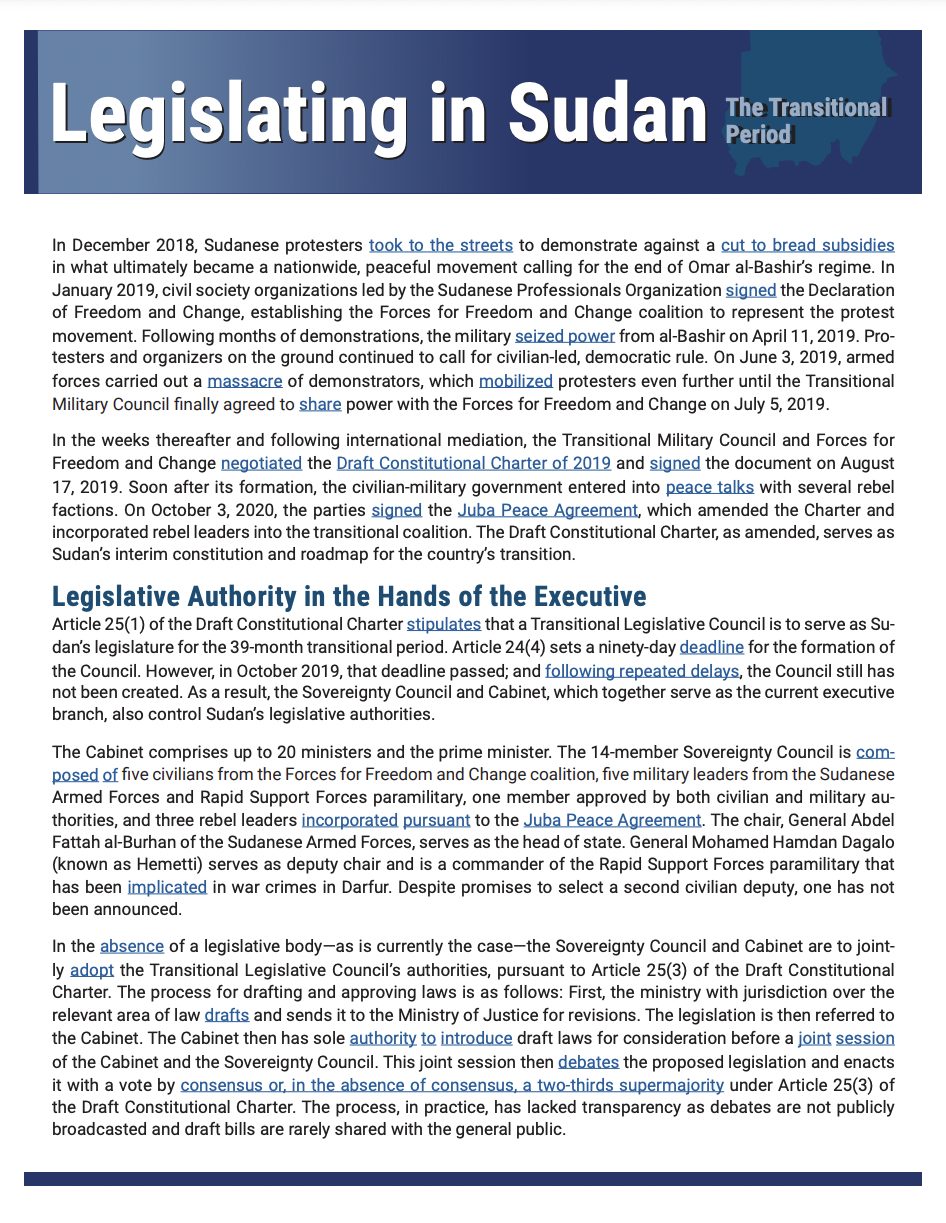 download PDF
Related Content
The Beirut Port Explosion Comes to U.S. Court Explainers 08/02/2022
The Path to Tunisia’s 2022 Constitutional Referendum Explainers 07/19/2022
How Russia’s War in Ukraine is Impacting the MENA Region Explainers 07/11/2022
Tunisian Judges on Strike: Is the Independence of the Judiciary at Stake? Explainers 06/15/2022
The Prosecution of a Syrian Regime Doctor in Germany: Implications and Opportunities Explainers 01/12/2022