Thousands demonstrate to denounce the Maspero Massacre on October 28, 2011 (Photo by Hossam el-Hamalawy)

On October 9, 2011, thousands of peaceful protesters marched toward the Maspero building, the headquarters of the Egyptian Radio and Television Union, to demonstrate against the demolition of St. George Church in Edfu, Aswan. Eyewitnesses and video footage confirm that as the demonstrations proceeded, security forces fired tear gas and live ammunition at protesters and drove armored personnel carriers at high speeds into the crowd, running over demonstrators. Official state media incited against protesters on live television, and a state television anchor at the time called on “all honorable citizens” to take to the streets to defend the military from “Coptic attackers.”

As a result of indiscriminate state violence and incitement, 28 Egyptians were killed and hundreds were injured in what became known as the Maspero Massacre.

In the ten years since the Maspero Massacre:

Where we are today… 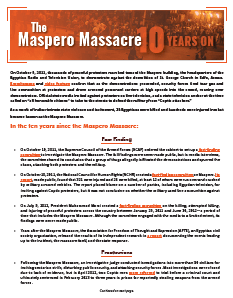