Ahead of Tunisia’s Universal Periodic Review (UPR), the Tahrir Institute for Middle East Policy (TIMEP), the Committee to Protect Journalists (CPJ), and the National Syndicate of Tunisian Journalists (SNJT) have issued a UPR Advocacy Fact Sheet that complements the alternative civil society report that the three organizations published in May 2022 per the UPR process.

The UPR is a mechanism of the United Nations created to examine the human rights performances of all UN member states; Tunisia’s UPR is set to take place in November 2022.

Much like the alternative civil society report, the advocacy fact sheet traces the significant deterioration of press freedom in Tunisia, particularly since President Kais Saied’s July 25, 2021 announcement declaring that he would freeze the parliament, dismiss the prime minister, suspend much of the constitution, and rule by temporary decree. The fact sheet documents:

In an effort to comprehensively address the deterioration of press freedom in Tunisia, this fact sheet proposes recommendations relevant to both the country’s legal framework and its violative practices. 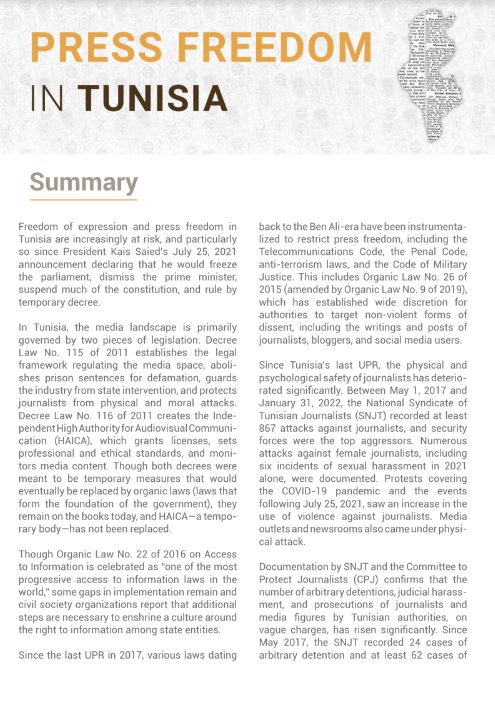