Elections in Upper Egypt, Where There is ”No Such Thing As Parties” 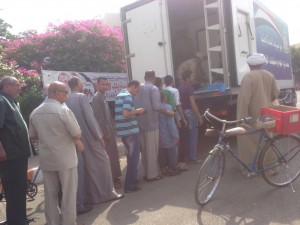 On Sunday morning, a line of about twenty people formed in Qena in Upper Egypt on the first day of parliamentary elections. The queue, however, is not waiting to pick from candidates to represent them in the capital, but is made up of people congregating for a free handout of meat from a Ministry of Defense truck.

Around the corner, behind the provincial court of appeals, there are no queues, only a couple of elderly women inside the polling station struggling with their ballots. The absence of people is the theme of the day, with the station’s judge saying that by noon only “tens” of voters had passed through to enjoy their political franchise. The judge turns away to talk to the women, and fills out the form for an elderly woman who says she cannot read well and cannot understand the ballot.

With a poverty rate at 58% and an illiteracy rate of 35%, it is not surprising that the few who turned out on Sunday struggled with how to cast their vote for Egypt’s new legislative chamber. Ahmed Hamdy Shaheen, in his late thirties, is running for the only strong leftist party fielding candidates in the elections, the Egyptian Social Democratic Party (SDP). He puts the blame as much on the judges as illiteracy. “There are three seats in this constituency. People are not used to it so they vote for one [as in the old single-seat system]. The judges either let them ruin the ballot by leaving just one vote or they pick the votes for them,” Shaheen said.

At the “City of Labour” School in central Qena, Judge Ahmed Zeid says he has been flown in from Cairo by military plane, but by 2 p.m. his journey has been only to oversee the votes of 200 citizens from his list of 2,400. “It’s weak,” the judge says. Like other stations, his voters are primarily older and male.

At Sadat School, the judge denied correspondents the ability to speak to voters, despite official press accreditation. The official did say, however, that from his five lists of 2,200 women, only 3% of voters had cast their ballot by 1 p.m.

Two 23-year-old men, Muhammad Ahmed and Mu’min Muhammad, emerged from the school and said that they voted for the Wafd and Future Nation [Mustaqbil Watan] Parties’ candidates because they want job creation in the city and because the Future Nation candidate was young, but they are not clear on what policies the parties are pushing.

A campaigner for the Future Nation Party said that their key appeal is their youth. “People want to see the product of two revolutions, our focus is education… and we have a chance because our list has famous figures on it like [former intelligence general] Sameh Seif al-Yazel.”

Future Nation’s candidate has erected a tent near the polling station which is providing free teas and coffees. One of his young supporters said, “He’s like a brother in the community and he’s young. He doesn’t lie and say that he’s going to give me a job. I think the young will come out to vote; they’re probably asleep now.”

Qena is host to three large tribes—the Hawaras, the Arabs, and the Ashrafs—as well a strong Christian community. The tribes were formerly close to deposed President Hosni Mubarak’s National Democratic Party but suffered at the hands of Islamist candidates in the 2011 post-revolution parliamentary elections.

Ali Bilal, 31, is a car salesman and voted for independent candidate Saad Ibrahim Hassan, because “he is an Ashraf and is my elder cousin.” Hassan’s banner, hoisted around town, like many others, carries a message saying that he is backed by particular families.

SDP candidate Shaheen explained how he is hoping to play the local politics game: “I am from an area outside of Qena city. I am relying on my village’s voters—about 13,000—to all vote for me. Voting is tribal; everyone votes by bloc. But the trick is to get your bloc out all on the second day, then you can use it to motivate everyone.”

Riding the microbus through the desert road from Qena city to the town of Nagaa Hammadi, a long spread of farming families living in half-finished houses skirt endless sugarcane fields irrigated with dirty water. A queue of cars trails down a dirt track waiting for their turn at a petrol station. In recent years, however, Nagaa Hammadi’s most notorious political conflict has been sectarian violence between its Coptic Christian and Muslim communities, particularly a spate of over 60 kidnappings of members from rich Christian families.

“The Archbishop Kirollos used to be highly politically involved. During previous elections he used to direct votes in a certain direction, against people he had personal disputes with,” says Coptic journalist Amir al-Saraaf. “This time he has not gotten involved. He had orders from Pope Tawadros [II] not to interfere.”

Speaking from the bare office of the local newspaper he runs, al-Saraaf says that security forces in the area undertook a campaign for the three days running up to the elections, arresting Islamists who were known to be able to mobilize votes. Nonetheless, al-Saraaf sees that the power and marginalizing effect of community allegiances still will play a strong role as the town goes to vote.

“In Upper Egypt there is no such thing as parties”, he says. “People vote for the individuals they know or are related to. Most of these kidnappings were attributed to people from areas that are branches of the Hawara tribe. Now you will not find a single Christian voting for a Hawara candidate.”