Furnishing a Future in Damietta

In the city of Damietta, the capital of the eponymous province, everything bears a sign of manufacturing and industry. Half-finished chairs and sofas spill out of countless workshops onto the city’s streets, the sound of machinery whirring is often audible, and the smell of cut wood and lacquer lingers in the air.

The governorate is famously productive and proud of it. Over 70% of Egypt’s furniture exports are constructed here, and in May then-Prime Minister Ibrahim Mahlab sought to show support for the industry by laying the foundation stone of a “New Furniture City” that is planned to hold some 2,400 workshop spaces and create 30,000 jobs.

“Our furniture heritage is deeply rooted in the culture but we have a huge problem: everything is Chinese. This cup, this spoon, this ashtray—where are we living?” Upholsterer Muhammad Zeraa, 42, spoke from a coffee shop in the central Damietta city district, lamenting the lack of support the government has shown in recent years for Damietta’s local industries, “We receive no subsidies to help us compete with international prices and the government puts no restrictions on foreign imports,” Zeraa said, and as for the New Furniture City, “it will only benefit existing prominent businessmen unless we see proper support in finance and education.” 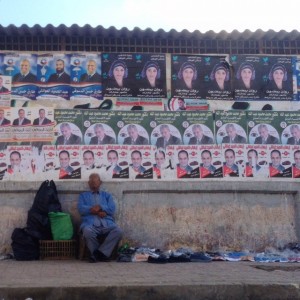 Years of neglect from former parliaments and cabinets have failed to harness the potential of the city and provide for its labor force, according to Zeraa. “The nearest hospital that specializes in limb injuries—which we have a lot of—is in Sharqia [120 kilometers away],” Zeraa says. He also identified insurance coverage as a vital issue. “Workers and fishermen pay their employers [a portion of their salary] for health insurance but because of the bad economic situation businesses often fail to provide when the workers need it, for instance when a business closes. Then, workers have to cover their own insurance.”

Among the names Zeraa voted for on Sunday was Independent Current candidate Ehab al-Ghobashi, “because he’s young—the old parliamentarians didn’t care and put us in this situation.”

Sitting at his desk on the second floor of his riverside furniture shop, the 32-year-old al-Ghobashi agrees with Zeraa’s analysis about what has upset their governorate’s trade. “We import two billion Egyptian pounds’ worth of furniture goods a year. This is a national shame, and we are under threat.”

In 2011, the Muslim Brotherhood and Salafist parties won the province’s seats. This year, al-Ghobashi thinks that those voters will be split between voting for the Salafist Nour Party and boycotting the elections. For that reason he says he has been targeting the youth and small business owners. “These are the people who have been badly affected by Chinese and Turkish imports, so I tell them to get out and vote or they will be pushed out by bigger corporations.”

Al-Ghobashi said he decided to run because there were too many old names putting themselves forward, such as Sami Soliman, former member of parliament and member of Hosni Mubarak’s National Democratic Party. Al-Ghobashi accused Soliman of buying votes to make up for not having a genuine voter base. In this election all the old tricks have come back, he says. “People buying votes, the religious people saying, ‘Vote for us to go to heaven,’ and the tribal families voting en masse for one candidate.” For that reason, al-Ghobashi sees his chances as slim, but says it is a necessity to run to build his base for next time and give people a choice.

“We didn’t take part in two revolutions to see our youth lose their dreams and ambitions,” he said.

At 3 p.m., Judge Muhammad Abdel Mouzeir, overseeing the vote at a high school for girls in the central district, says that he has only had 100 voters turn up from his list of 2,500. He puts it down to the apathy of the youth. “This is a huge mistake. If a million young people turned up, even to ruin their ballot, it would make a difference.”

Speaking on the stairs of the school, Osama Helmy, a 28-year-old furniture worker, said he voted for independent candidate Diaa Dawoud and the Nour Party’s Tarek al-Dessouki. Helmy said he voted for Dessouki because he was in the 2011 parliament and because he is a “good person.” When asked what he expects from his incoming representatives, he shrugged and laughed. “I don’t expect much from them. We’ve been talking about improving the city for years and I’ve never seen any difference.” 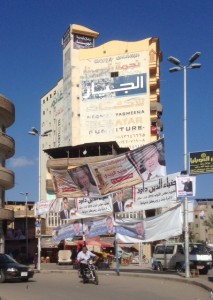 Business student Muhammad Abdel Musa, 20, voted for two female candidates, Ghada Aqr and Ashraf Shaloofi, because they are “from us and humble,” emphasizing the latter word. “If they are from us they will understand our problems—the quality of infrastructure and state of the streets. I voted because it is my right to pick who I want.”

At 6 p.m. at the Salah al-Din School, Eid Zaazou, a 56-year-old Salafi who works in the furniture industry, would not say who he voted for, but implied he had previously voted for the party of the now-disbanded Muslim Brotherhood, saying that last time he voted for “freedom and justice” (the Brotherhood’s political wing was the Freedom and Justice Party, which is now banned).  He said that his main concern is employment; he never had a stable job and now has three sons and wants work for them.

Upstairs, the overseeing judge who declined to give his name but said he was drafted from Sohag, says he had only received between six and eight percent of his voters. He explained, “People have not come early because I think they’re busy. They’re all about work here.”