Giza Runoffs: Candidates pair up in Omraniya as race heats up in Agouza

At 11 a.m. Tuesday, two throngs of people of people were gathered outside Ahmed Zuweid School in the working-class Omraniya district of the Giza governorate. With two seats at stake in this district, the four remaining candidates have informally split into two opposing teams, and the size of the groups surrounding candidates outside the school seems to match their chances.

Muhammad Fouad, the frontrunner from the Wafd Party, was relaxed and joking with his supporters. Speaking about his decision to join forces with Ehab Mansour of the Egyptian Social Democratic Party (SDP), he said, “At the party level we have similar platforms; our parties were part of the same coalition earlier this year. Besides that, Mansour has a background of helping people from this district.” 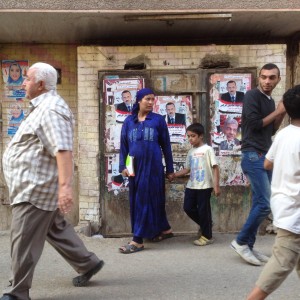 While both Fouad and Mansour are affiliated with parties, political groups generally failed to make big inroads in the individual system. Fouad believes candidates see parties as a burden to carry, but he told me that parties are necessary to advance the country’s political efficacy. “Some candidates are too lazy to explain to people the necessity of parties, the need for legislative agendas and blocs in parliament. If a voter wants me to put up lights in the streets and fix roads I can do that, but that is not the point,” he said.

Mahmoud Nabil, a student leaving the polling place at Ahmed Zuweil School, said, “We can’t go on like this; we need stability. I read up on candidates and chose Fouad and Mansour. But people like us, in this area, we are not like [the upper- and upper-middle class areas of Zamalek and Maadi where they have reasons why they vote for people. Here we just vote for anyone.”

Fouad and Mansour (who came second in the first-round votes) are facing off against the joined forces of Asmaa Abdel Hakeem and General Ahmed Abdel Baset. Abdel Hakeem’s campaign is notable because she is one of only four women to make the runoff stages in the individual seat system in the first phase of voting. Standing amid a notably smaller group of people than the throng around Fouad and Mansour—but with three suited bodyguards—she puts her success down to “belief in God, the belief that we need to do something for Omraniya and serve our country.”

“Four women in the runoffs is a low number. This is because women in Egypt are not like men. They have less presence on the street and so are less well known.  Maybe they made mistakes with their campaigns, but as far as I know we four women are as good as each other,” Hakeem said.

Speaking about the process of linking up with General Abdel Baset, Abdel Hakeem believes candidates have to be honest with voters, “not just make deals with candidates to get the most votes. I made a deal with him because his agenda is similar to mine and he is always present in the street. That’s why I put my hand in his.”

Fame and reputation have surfaced in the parliamentary elections more often than hard policies. Mina Armiya, a 42-year-old shopkeeper opposite the Ahmed Zuweil School, chose the SDP’s Mansour because he heard he is respectable and a good person: “He did not put posters on the walls and ruin the area. He got permission for his banners from local authorities.” Armiya said he does not see the point of the first-round party-list system vote: “We don’t know who the candidates are, so nobody cares, nobody was from my area.  Anyway, like Amr Adeeb (a television show host) said, ‘In the end, the government will do what it wants.’ There will be little difference.”

Alia Ibrahim, in her sixties, said that she voted last time and will vote this time because of the fine of 500 Egyptian pounds that the government said it would impose on those who did not vote, though few believe its sincerity. After she asked whom she should vote for, or if she should just leave it and go home, she said, “They are all sons of dogs. They only want to win for themselves and not help anyone else.”

The Agouza district of the Giza governorate is home to one of the country’s most high-profile runoffs. Ahmed Mansour, the 35-year-old son of controversial lawyer Mortada Mansour, is facing off against liberal former parliamentarian Amr Shobaki. television personality and editor in chief of al-Bawaba newspaper Abdel Raheem Ali secured enough votes in the first round to leave just one seat open for the runoffs.

The race has been full of media fireworks and traded accusations, but by 4:30 p.m. in Gamal Abdel Nasser School, a judge said that only 100 of 1,800 voters had cast their ballot. Outside, Mansour—also a lawyer and board member of the Zamalek Sports Club, where his father is president—told me, “For 60 years we have not had a proper image of a parliament member and do not have any trust in the parliament. I have to work to prove that parliament is important.” 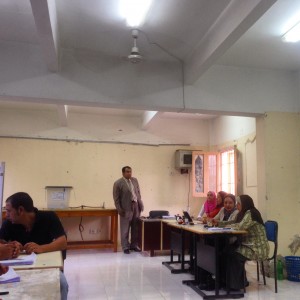 Mansour lost to Shobaki in 2012 in the same district, but puts his improved result in first-round voting last week down to local popularity from his work with the sporting club. As for policy, “I want to simultaneously support the state’s institutions but also focus on continuing the democratic path and working on rights and freedoms,” he says. Despite the rhetoric, the Mansour family is widely seen as being against the popular uprising beginning in 2011. Mortada Mansour, the candidate’s father, is seen as a counterrevolutionary figure who is a defendant in a case investigating his connection to the “Battle of the Camels” during the 2011 uprising.  His rival, Shobaki, is a well-known politician and journalist who has taken up causes in his columns such as a wave of forced disappearances by the Egyptian security forces in recent months.

Fawzy Hassan, a 26 year old economic researcher, said he didn’t vote in the first round because the candidates were not worth it. Outside the Plant Protection Research Institute polling station, however, he said he voted in the runoff as “punishment” against the Mansour family. Hassan said he also respected Shobaki for not trying to win with money.

Mansour, however, complained that the battle with Shobaki has not been fair. “I wanted it to be clean, but Shobaki replied by circulating videos that misrepresented and defamed me,” he said, referring to a widely circulated video of him swearing strongly to supporters about the campaign and his opponent.

Mansour confirmed that newly elected Abdel Raheem Ali gave him his endorsement. In a television show with controversial host Ahmed Moussa last week, Ali spoke alongside Mansour to denounce Shobaki. “Electing Shobaki is a shame on Doqqi and a shame on the Egyptian people,” Ali said, and accused Shobaki of writing the Muslim Brotherhood’s platform in 2007.

Seated in his large office at al-Bawaba, surrounded by various members of his staff, Ali said, “The people who voted for me rejected Shobaki, and they rejected the project of the January 25 elite. They voted for June 30 and for me.”

He dismissed reports that he had used his newspaper as a campaign outlet. “We respected the electoral silence and asked our journalists to cover with fairness; we dedicated two pages every day to the elections. I was interviewed only once, and the rest were my own regular columns.”

While Mansour is running for the leading Free Egyptians Party, Ali said he did not want to join any parties because they are “cartoonish” and proved they are weak by failing to bring strong turnout.

Many critics have dismissed Ali as a negative political influence, notorious for leaking phone calls of pro-democracy revolutionary activists on his television show, but he spoke seriously about his new parliamentary authority. “We are currently reviewing the decrees passed by the president for the first sitting of the parliament. We have formed a committee with lawyers and we are getting ready to start business.”