On the second day of parliamentary elections in Assiut, the general feeling is that there are more voters at polling stations in Upper Egypt’s biggest city, but stories of violations are everywhere.

At Khadija Youssef School, an elderly women said she did not know whom to vote for, and the judge of election finished her ballot on her behalf. This seemed to be a common occurrence, one which we also witnessed yesterday in Qena.

The most alarming sight, however, was the open, thriving trade in votes. At midday, groups of people poured out of countless microbuses outside the Khaiyat School in the working-class district of Sadat. We overheard two men in a microbus branded with independent candidate Mostafa Abu Bakr’s posters talking about the price of a vote and agreeing that the price of three votes was 400 Egyptian pounds (LE). The families that alighted from these vans were walked by the drivers to the polling stations, then were walked back. 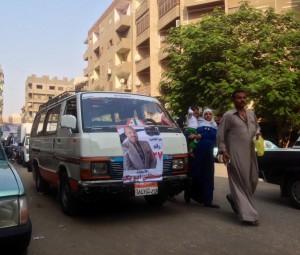 Despite this seemingly prevalent practice, judges at both the Nile and Zukhrufiya Schools reported that they had received no complaints over violations throughout the day.

In an apparent violation of campaign rules, voters heading in to the school to vote were handed leaflets from the throng of campaigners who have realized they can exploit the lack of awareness of candidates and platforms. Campaigners for Sheikh Bayoumi—a Salafi running as an independent—worked hard to give a leaflet to anyone who would take it. Rather than any policies or agenda, the slips of paper had just the candidate number and his tennis racket symbol for illiterate voters.

Abdel Hakeem Thabat Gooda, an older individual candidate, stood resignedly outside a deserted polling station in the Zukhariya area on the outskirts of town. “Some of the candidates gather people from the poorer areas, pay them and take them to polling stations. We did not have enough time to campaign. Most of the voters don’t know who to vote for when they arrive, but take the money anyway.”

The voters themselves, however, do not mention the phenomenon. Hany Nashaat, a government employee in his forties, said  in the individual vote system he picked Muhammad Dessouqi “because he has a good reputation like his father,” and Colonel Abdel Salaam Muk “because he is an army man and knows about discipline”.

Like his father before him, Dessouqi was a former member of parliament for deposed President Hosni Mubarak’s National Democratic Party (NDP). However, he came out the revolution unscathed and even his rivals admit he is a respectable man with no dirt on him.  Like his father, Dessouqi has a reputation of using his connections to solve people’s problems and almost everyone agrees he will win one of the seats, probably without need for a runoff.

Confusion over the 32 candidates running in the constituency of 283,000 voters seems to leave the ground open for the more prominent names to sweep up votes. A voting system that marginalizes party politics via individual seats has seemingly reduced the election down to a question of local fame, influence, and money. Banners are devoid of policies and voters have little to discern the candidate’s distinctions.

Muhammad Ali, 32, works at a falafel sandwich shop and says he will not vote—“Nobody running is worth it”—but he voted previously for Dessouqi because “he is respectable”. Ali said, “Nothing will change because they are all the same. People are voting for those who can give services or jobs, candidates should be concerned about the country’s interests not individuals.” 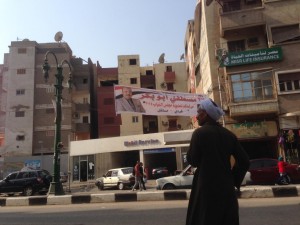 Ehab Mounir, a 36 year old owner of a computer shop voted for Muhammad Dessouqi, Emad Ewany and the “For the Love of Egypt” slate of candidates in the list system. “They have good reputations and to be honest I do not know anything about the rest. The other names I just heard when I was entering the voting station and people would say, ‘Vote this way!’ or ‘Vote that way!’”

Ayman Osman is running on the For the Love of Egypt list. Despite his alliance’s national prominence, his low profile as a local doctor left him less than confident about the results and frustrated by the violations he saw on election day. “I had people visiting me offering their services for money, to get voters out, mainly from underdeveloped areas in Assiut,” Osman said. “They don’t have any problems at polling places because security officials don’t care about the integrity of the vote. They just want the election to pass in peace.”

Ayman Samir, a 25-year-old Coptic Christian working in a spice shop, voted for Muhammad Dessouqi, Emad Ewany (a fellow Christian), and the For the Love of Egypt list. “It’s my responsibility to vote to the country to vote.” But Samir could offer little knowledge of the candidates and their campaign, and seemed to be backing the bigger names.

Hossam Mostafa, an accountant in his forties, is a candidate for the Egyptian Social Democratic Party. Sitting with dozens of supporters in the leftist party’s offices, he was animated but dejected as he smoked his third cigarette. “We have seen violations inside and outside the polling stations, people inside wearing t-shirts with [former NDP parliamentarian and high-ranking police officer] Muhammad al-Sahafy’s campaign logo on. But the real problem is the buying of votes. Police are seeing it but they don’t care about the violations, they don’t want any problems.”

Mostafa said their small team with little funds have struggled to connect with the youth in the Inner Assiut district of 283,000 eligible voters. A young campaigner said that he heard of a candidate offering LE1,000 per vote, prompting Mostafa to joke, “Go down and sell yours. We could use the money.” But he added that the violations are not as bad as 2010. “Back in those days the civil servants just sat there filling out votes”.