In Damanhour, Candidates Struggle to Distinguish Themselves

To some young Egyptians on Monday, fishing seemed a better use of time than voting on the second day of elections. Two young men quietly chatted in Ezzat Shubra at sunset on the riverbank, oblivious to the patriotic duty dozens of citizens were enthusiastically fulfilling across the road in one of Damanhour’s polling stations. Both 35-year-old workers declared they were boycotting the election: “All the candidates are the same. Most of the young people of the working-class are not voting.” One of them added that he is financially stable, which is not the case of his friend. “We all want the unemployment to end. I voted for [President Abdel-Fattah El] Sisi last year in the presidential election, but now why would I vote for “For the Love of Egypt” [an electoral list coalition]? These people are clearly no use.”

One of the family elders of the area, 52-year-old Muhammad Zawy Helmy Riadh, a labourer, boomed that he chose the lotus symbol of For the Love of Egypt. When asked why, he waited for cues from a man in a suit navigating the crowds of workers outside the polling station. “Protect the people. Change the constitution.” They rubbed shoulders with other candidates’ supporters eagerly distributing cards carrying their favorites’ face, name, and symbol.

“Some violations have been reported when illiterate voters ask someone to read out loud the names and help them pick some. More surprisingly, a few voters called us up to complain about the fact that they can’t know which candidate is on which list—but that’s how the ballot papers are made,” said a member of the Electoral Commission of Damanhour. Inside the Ezzat Shubra voting room, the judge said, “Everything went smoothly today. No one notified me of any violation. As you can see, we do not discriminate against political currents; here is one of the Nour Party observers. And the turnout was satisfactory.” 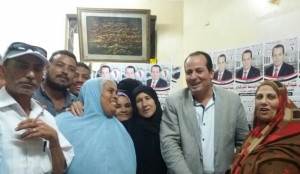 Iman, a housewife from the working-class neighbourhood of Sayeda in Damanhour, disagreed. “The turnout is very low; it’s no comparison to the previous poll.” She cast her vote but said none of her three children of voting age has cast a ballot. “It’s like their generation is boycotting. My son says there is no point, that once they are elected the members of parliament disappear and we never hear from them again. My daughters were not convinced by anyone. I believe the young army guy, Adel Oqda, is good, and Sanaa Barghash, who was a member of the local council for a long time, and Magdy Atteya, the former director of the club—unlike the Sharqawi cousins, whose reputation is so bad.”

The two Sharqawi cousins, Alaa and Abdel Baset, are running for the same seat in this election with daggers drawn. They deny any familial relationship, and voters in Damanhour say they heard one or the other, or both, are buying votes for 100 or 200 Egyptian pounds. A member of  the provincial electoral commission denied any official complaints had been filed. “They have to be written and signed,” the official said. “The people apparently prefer spreading rumors than coming to the police station filing a case.”

Alaa al-Sharqawi, however, swore that he had filed a case against his cousin. Alaa was a member of parliament for the National Democratic Party (NDP) of deposed President Hosni Mubarak, serving multiple terms. For someone who won in the notoriously rigged 2010 elections, Alaa is curiously fascinated with electoral transparency.

“He gave gifts to people—not money—a week ago,” one of his detractors asserted. A member of the Beheira Electoral Commission hinted that both Sharqawis had broken election law by campaigning ahead of the allotted period.

A minibus driver in his twenties from the working-class neighbourhood of Abu Rish said he voted for Alaa al-Sharqawi, whom he also used to elect before the end of the Mubarak era. The young man added that he tends to go with the flow: he always voted for NDP candidates, except when he voted for the Muslim Brotherhood candidate in 2011. Muhammad Heshmat, the successful candidate from the Brotherhood’s Freedom and Justice Party (FJP), who sat in the Islamist-dominated parliament that lasted six months, is now in exile in Turkey. At the time, Alaa did not run, “as there was no stability in the country, after the revolution. We did not stand a chance in front of the FJP.”

Alaa’s name is all over the city—written on walls, strung on banners across the street, or even on pre-2011 posters that are faded but not gone. On Monday, Alaa and his men bustled around Damanhour, constantly on the phone with each other and potential voters. Men in suits and nice cars went around the city to encourage voters, find fault with the judges who observe elections, or accuse other candidates—especially Abdel Baset—of buying votes. As I sat with him for an interview in a run-down coffee shop, Alaa—his hair dyed an artificial black, like Mubarak’s—seemed very uninterested in his own program. His right-hand man did most of the talking, Alaa did say that the constitution gives too much power to the parliament, and that he hopes to be part of a legislature that cooperates with the president.

Abdel Baset, speaking from an empty butcher shop in the Arais neighbourhood, made no mystery of his partnership with the Armed Forces since 2006 in delivering roads, social housing, schools, and other goods to his home district of Beherya, in Alexandria and in Kafr al-Sheikh. “I am successful but I am only a provincial businessman,” he said. He distanced himself from prominent Mubarak-era businessmen-turned-politicians—such as Talaat Mostafa and Ahmed Ezz—who now face legal trouble. Voters excitedly swarmed around Abdel Baset, trying to touch his hands, making sure he heard their name and understood they will vote for him. 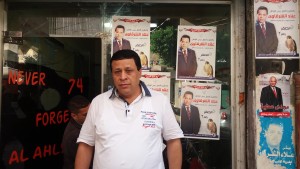 The two cousins’ feud, while colourful, does not reach the level of another Damanhour ex-NDP candidate, Mabrouk Zaeetar, who was a parliamentarian under Mubarak but lost in the 2010 elections. Zaeetar was imprisoned in connection with the death of a neighbor in a land dispute, but still registered for the current elections and campaigned, though he still had time remaining on his sentence. His posters are all over Damanhour, and the word on the street is that Zaeetar is now out of jail in time for voting.

“Rejoice, mother of martyrs!” A poster with Sisi’s face hangs on a wall, and praises Mrs Barghash in these terms. Sanaa, 46, is unfazed by the attempts at making people distrust her. She wears the veil but is by no means a supporter of the Brotherhood, she said, and she is not ashamed to have belonged to the now-dissolved NDP. “Now I’m an independent,” she explained, “because I have not seen any strong party that could actually be worth joining. So I want to try and rely on my own supporters.”

The fact that Sanaa’s husband is a police inspector—“A good man; not all policemen are bad people,” said one voter on the scene—does not seem to sway opinions one way or the other.

“She did many good things, and is willing to help the poor, and take it upon herself to look for solutions to help individuals,” said Mohsen al-Sekenedi, a 44-year-old driver, echoing others’ compliments. Sekenedi voted for her this time, but still complained, “Too many ex-NDP people are coming back. It keeps people away from the ballot boxes.” He chose the Salafi Nour party. “I actually don’t like them,” he ponders. “But I had no clue who to vote for; I hate all the lists. So why not Nour? They’re somehow less bad.” The Brotherhood MPs, he said, were, “going out of their way to help the poor.”

“One can judge me once I get elected,” said Colonel Adel Oqda, a young Army officer running for the first time. In front of his polling station, voters excitedly gathered around him and wave flags. His program seems to be that he belongs to the army. Pro-Sisi voters give him the trustworthiness and social solidarity they perceive in the army.

Magdy Attiya explained he would not join the For the Love of Egypt list because of their proximity with former NDP figures. The Free Egyptian Party (FEP), on the contrary, fits his liberal persuasion. [Editor’s note: The Free Egyptian Party ran in the For the Love of Egypt coalition for list elections, but Attiya ran as an individual candidate.] The 56 year-old sales manager believes in the necessity to review and soften the stance of certain laws that have been issued by presidents over the last two years in the absence of a parliament.

Alaa al-Sharqawi’s campaign manager criticized the FEP party: “We want to change the Constitution according to what the president says.” The strategist said his main concern is that “a party from abroad or funded with foreign money might topple the government, or get us a worthless prime minister.” When pressed to clarify, he admitted that he meant the FEP. The billionaire funder of the FEP, Naguib Sawiris, and many of their local candidates manage to reap the benefits of an established presence and comfortable wealth without the ex-NDP stigma.

All of these five candidates agreed on the priorities for Egypt and for Damanhour: improvement of education, healthcare, access to gas, water, roads. They differed, but only slightly, when it came to the extent to which they would blindly support the executive power, and on whether had a plan to solve these issues.