Outside the voting station at Ibrahim Lokman School in Mansoura, the capital of the Nile Delta’s Daqhalia province, jewelry trader Samir al-Nady, 62, complained about the state of his city. “We’re supposed to be the ‘Bride of the Nile’, but the streets are dirty and when it rains, we drown,” he said.

Al-Nady wants to see an end to the parliamentary immunity of members of parliament and the culture of providing personal favors for their constituents. “I want an MP who can say no to the government and will focus on education and health, the pillars of a society.” His views are generally similar to numerous wealthy residents of downtown Mansoura. Rather than supporting the figures of the past, they want new faces who are not associated with years of failed governance. “I have seen no change in two revolutions, but we need change from the system based on corruption and connections. Other countries’ governments care ten times as much for their citizens as ours does about us.”

Al-Nady said he came to vote for independent candidate Nabil Gamal and against former National Democratic Party (NDP) parliamentarian Waheed Fouda. “We tried him and he failed.” 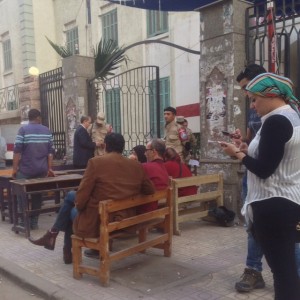 A block down, at Mansoura University, Muhammad Ghoneim sat in his office in the medicine department. Ghoneim is a scientific adviser to President Abdel-Fattah El Sisi and was head of the key pro-revolution list in the 2011 parliamentary elections. This time he is not running, but he is publicly backing candidates who are “young, unpolluted, and never connected to the NDP.”

Ghoneim attributed the low turnout in elections across the country to a lack of political differences between rival movements, unlike the 2011 competition between Islamist and liberal candidates, and the negative influence of the return of NDP and business figures connected to the regime. “The difference between turnout this year and in 2011 is that then the Muslim Brotherhood was able to mobilize people and the liberals were willing to do their best [to join forces] to defeat them. There was a strong challenge; now there is no challenge.” Ghoneim claimed that there have been significant problems of candidates paying for votes, although “it’s hard to document.”

Later, outside the Ahmed Zuweil School near the Daqahlia Governorate Building, pharmacist Ashraf Rehan, 38, said he voted for the independent candidates Enas Abdel Haleem and Muhammad Salem, because the latter had the backing of Ghoneim, whom Rehan trusts. But the pharmacist had low expectations from his choices: “The most we can ask for is that they don’t harm us.”

He continued, “I did not vote before the revolution; now I feel like I ought to take part. I voted for Shafiq in the [2012] presidential elections, and [in 2014] I voted for Sisi because there was no alternative. Here it is all about money, as the people who cannot get their sons into the judiciary put them into parliament. But I am trying to be positive.”

Judge Ahmed Adel, overseeing proceedings, says that of his 2,700 registered voters the total turnout for both days by 4 p.m. on Monday was 20%, which is six percentage points less than the total turnout during the first phase of elections. Adel was in Luxor in the first round and said that he noticed a difference in the “culture” of the voters. “People here understand the system better. They are in and out faster and they seem to know who they want to vote for.”

Ahmed, 21, did not want to name the candidates he voted for, but said he had voted for three young people. Even if they have no experience, that is good, if not better, he said. “Actually people with experience in this country should not be allowed in places of authority, it harms you and me.”

Former NDP member of parliament Waheed Fouda, speaking inside the empty grounds of the Ahmed Zuweil School, denied that the turnout is low. He said that in Mansoura voters do not pick on the basis of political platforms but on the basis of the individuals they know. “The candidate that wins will be the one who has the most direct connection with voters and can provide services to them.”

Fouda was once singled out by former President Muhammad Morsi in a speech accusing Fouda of hiring men to obstruct electricity production. Then, in August of this year, Fouda was arrested over a dispute involving the kidnapping of an individual who was involved in an antiquities smuggling deal.

“In 2010, I topped the ranks without any forgery, even the Muslim Brotherhood congratulated me,” Fouda boasted. “In 2011, I received 120,000 votes. I won’t get that this time because people do not believe in the parties and candidates. Those who have gone to vote have gone to vote for an individual and a friend.”

Outside the school, Umaya Mahmoud, 24, said she voted for people that she knows personally because she can be confident that they are good people, naming Waheed Fouad and Nabil Gamal. “We know Waheed, and he provides services. Hopefully they will do their best,” she said.

In her late 50s and immaculately dressed in expensive designer brands, candidate Enas Abdel Haleem complained about violations of the other candidates. Haleem, an oncologist, accused Waheed Fouda of spending 10 million Egyptian pounds on votes. “Why, its not worth it! They were doing it in hiding yesterday but now do not care and have been buying votes in front of the polling stations, offering hashish and tramadol. I wouldn’t care, I have the best tramadol, I have a license for it!”