Nationalism and Religion North of Cairo

On the first day of the runoff phase of Egypt’s parliamentary elections, 86-year-old Fayek Hassan held court outside a polling place in the Shubra neighborhood of Cairo. Hassan—wearing traditional clothes and surrounded by a number of local residents—outlined his reasons for supporting various candidates. He voted for the “Republican Alliance of Social Forces” the party list headed by Tahany al-Gebali, the former vice-president of the Supreme Constitutional Court, because Gebali is “an old colleague from the Tagammu Party.” Hassan portrayed himself as an activist against successive Egyptian regimes, claiming to have spent 18 years (over several stints) in prison under former Presidents Gamal Abdel Nasser, Anwar Sadat, and Hosni Mubarak. “Oppression leads to violence and terrorism, and that is why I am against all presidents, [current President Abdel-Fattah El] Sisi included, but I came today for one reason: Nedal Saeed.”

Nedal Saeed is a young individual candidate with a Ph.D. in political science and economics, and seemed to enjoy great popularity among the resident of Hassan’s neighborhood in Shubra. 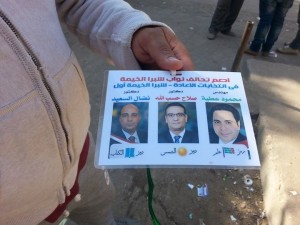 “The only reason for me to vote today is Nedal,” said Hassan. “His father is a simple worker, yet he managed to raise him to become who he is today; a Ph.D. holder and a parliamentary candidate. We take a lot of pride in him,” Hassan said. Although he made it clear that he is against “extremist and jihadi mindsets,” Hassan openly said that in the 2012 parliamentary elections he had voted for the Freedom and Justice Party, the political arm of the now-outlawed Muslim Brotherhood. “Don’t listen to the mainstream media. The members of the Brotherhood are good people. I met them in prison and saw their true colors. I was imprisoned for fighting for workers’ rights, and they were jailed for their opposition of the regime. They are now still oppressed, so, yes, I stand in solidarity with them, and with the hundreds of imprisoned men and women from all forces. Yet, I have to show my support for young, self-made politicians like Nedal.”

In this particular voting station, according to the electoral judge, 20% of the 2,885 registered voters turned out in the first round of the second phase.

Near the entrance of a voter station in Khanka— in Qalyubia province, north of Cairo—where 15% of 2,889 registered voters cast ballots in the first round, a man sat at a desk with a laptop, surrounded by seven other men. He first claimed that he was volunteering to help residents find their stations, but eventually admitted he was part of the campaign of individual candidate Adel Saber.

“Although [Saber] is Christian, we all support him, and stand here to tell voters to vote for him. We are all workers in his factory. He is a good man,” said one of the men standing around the campaigner. Another added, “He is a businessman. He can help end unemployment in the neighborhood.”

A voter station in the Tareq ibn Ziyad School in Shubra, with 2,268 registered voters, saw less than 10% turnout in the first round. Hassan al-Imam, 39, a state television employee, said that he is campaigning for “a coalition of three individual candidates, who decided to join forces against the Christian candidates at the same constituency.” Imam adopted a strategy of “Muslim unity” to attract voters to his candidates. “The [Coptic] pope visited the church here four or five days ago under heavy security, and dictated people to vote for two Christian candidates,” he claimed. “So why don’t we do the same for our [Muslim] brothers?” 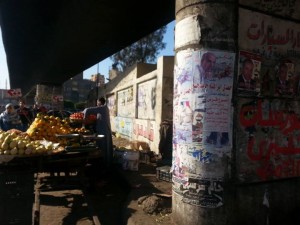 Imam explained that there are six people running in his constituency. “Two of them are Christians, and a third Muslim joined them to compete over seats as a coalition of three individuals,” said Imam. This motivated him to campaign for a coalition of the three other candidates, all Muslims.

Al-Nasser School in Shubra al-Kheima, Qalyubia—just north of the Cairo city limits—hosted two polling stations with 2,800 registered voters each, all men; each saw less than 20% turnout in the first round. At the school, Hussein Mahmoud, 75, leaned on his cane as he confessed, “I don’t know a single thing about the list I voted for, the Republican Alliance of Tahany al-Gebali, but I saw them on television, and felt they are patriotic and loyal.” As for the individual candidates, Hussein voted for Salah Tohamy, noting that he knows nothing about his electoral program or political background. “He is an army colonel. I read that on some of the posters in the streets. That is all I need to know to trust him, vote for him,” he said. With a weary smile on his face, Mahmoud said he hopes the next parliament will supervise the government, instead of blindly supporting it.

Most voters interviewed in Qalyubia stressed their concerns over security and stability, expressing that the security turmoil the country is now enduring is the reason why they would vote for army officers or pro-regime coalitions. One voter, retired teacher Nadia Ayad, 70, said that she voted for “For the Love of Egypt.” This coalition of parties led by former intelligence officer, Sameh Seif al-Yazal, garnered all 60 seats in both party list constituencies in the first phase.

Nadia said security is her top priority, and that she trusts the military to run other facets of the country. “The army can also make the economy thrive, because they are not serving their own interest, but rather the people’s. When young people find jobs that keep them away from extremism, terrorism will end.”