The family of Osman Ahmed Osman—an Egyptian businessman and government official who died in 1999—is a widely respected and influential clan in the Suez Canal city of Ismailia. Many projects implemented in the city over the past four decades included Osman’s investments: the family has built—with Osman’s company, the Arab Contractors—many schools, roads, and other infrastructure; has donated to renovate churches and mosques; and, importantly, has invested in one of the prides of Ismailia, the Ismaily football club. Mahmoud Osman, the family’s currently prominent public figure, ran for parliament as an independent candidate and won enough votes in the Ismailia City constituency to avoid a runoff. Mahmoud Osman gained nearly 53,000 votes to leave two candidates competing for the second seat in the two-man district.

“Mahmoud Osman is to Ismailia what Sisi is to Egypt,” said voter Hagg Hussien, 61, referring to President Abdel-Fattah El Sisi

Independent candidate Ashraf Umara, a retired police officer, came second with some 15,000 votes, far behind Mahmoud Osman. Umara has a reputation similar to Mahmoud Osman, with his family’s background playing an important role in his campaign. His uncle Abdel Moneim Umara served as governor of Ismailia for 13 years and was a minister in several governments between 1988 and 1998. Abdel Moneim Umara was also the youngest elected parliamentarian when he was originally elected to office. 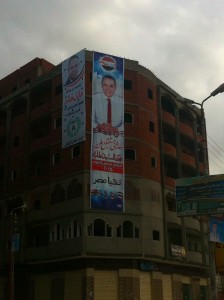 “It wasn’t only because of Ashraf Umara’s uncle that people voted for him,” said campaigner Mahmoud Ali, in his mid-twenties, from Umara’s team.  “His campaign has been quite a success. Our campaigners are from a wide, diverse range of specializations, mostly from the private sector with strong corporate backgrounds. We have organized a very innovative campaign that included public appearances of our candidate in rallies, sporting events, and even a rowing competition.”

“Many voices in Ismailia were raised after the 2011 revolution demanding Ashraf Umara become governor of the province; it was a completely grassroots movement, as is this campaign. We have spent a very limited budget compared to our rivals, but with many bright-minded staff and young volunteers we were able to achieve something tangible,” Ali continued.

Before the runoff, Ismailia witnessed an incident of police brutality that sparked several demonstrations. Pharmacist Afifi Hosni was arrested without a prosecutor’s warrant, and despite a medical condition, detained. Afifi died from a heart attack a few hours after his imprisonment. Umara made an appearance at Afifi’s funeral, which many voters perceived positively.

Ahmed Nasr Allah, the second runner-up in Ismailia’s first constituency runoff, is affiliated with the Nation’s Future Party and gained nearly 8,000 votes in the first round. Not long after first-round results were announced, Nasr Allah had a car accident that caused him to be hospitalized. He made sure to make a public appearance once he was released from the hospital to assure his supporters of his health. 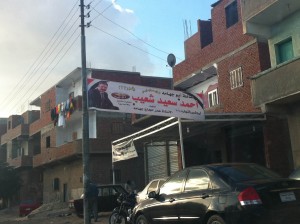 “Our campaign strategy is to focus on our candidate’s youth. He is a 35-year-old engineer who owns a private engineering company. His posters across the constituency all emphasize his young age and his campaign’s main slogan is ‘Youth is the hope,’” said Said Osman, a campaigner and member of Nation’s Future.

Nation’s Future Party started as a grassroots campaign supporting the roadmap announced after the ouster of former President Muhammad Morsi in July 2013. The movement supported Sisi’s presidential candidacy, and, not long after the president was elected, Nation’s Future was registered as a political party. “We have started mobilizing and preparing our candidates since November 2014. We have, so far, 25 candidates who have been elected to office in the first phase,” said Said Osman.

Controversies surrounding the party have increased recently. Not only did the new party gain an unexpected number of seats in the first phase, but its founder, 25-year-old founder Muhammad Badran, has been in close contact with the president in an increasingly public manner. Badran’s appearance next to Sisi during the “New Suez Canal” opening ceremony has fueled questions about the president’s connection with Nation’s Future.

Outside Ismailia City, another constituency, simply referred to as Ismailia, is rather rural, and dominated by the district of Abu Soweir. The constituency had 27% turnout in the first round, and four candidates are competing for the two seats in the runoffs. Candidate Ahmed Shoaib gained the most votes in the first round. On the first day of runoffs, his entire ancestral village seemed to have dedicated itself to supporting him. Many cars with Shoaib’s poster were spotted ferrying voters to polling places. Most voting stations witnessed active campaigning—which is illegal—but there were no reports of vote-buying.

“The candidate’s father, Hagg Said Shoaib, was a parliamentarian for three terms,” said Hagg Wahid, 55. “He was also a member of the most recent dissolved parliament. The whole area loves Shoaib’s family. Their clan has served the people of Abu Soweir, and they have arbitrated disputes between feuding families in the area for many years,” he continued.

“I know everyone who lives here and everyone knows me. I’m very happy with the High Elections Commission and I don’t have even one representative in any polling station because I trust the judges. The other candidates are friends and more than a family: I have reached an agreement with Abdel Fattah Abdullah on an electoral coalition to support each other and I have encouraged my voters to vote for him as he encouraged his voters to vote for me,” said Shoaib.