No Revolutionaries Voting in Tahrir Square

As the second phase of Egypt’s 2015 parliamentary elections began in 13 of Egypt’s 27 governorates, the iconic Tahrir Square, where thousands protested against former President Hosni Mubarak in 2011, was jammed with traffic and filled with posters of candidates for parliament.

In neighborhoods around the square in Cairo, a number of schools were used as voter stations, including two polling places inside Talaat Harb School. Only one percent of registered voters cast ballots on the first day in one of those stations, according to an electoral judge, and 130 out of 1,550 registered voters—just over eight percent—turned up in the other. Rabab, a 37-year-old lawyer, voted in the second station, deliberately spoiling her ballot in protest of the political situation.

While Rabab explained her reasons for nullifying her vote, her mother grabbed her firmly by the arm, stopped her from talking, and accused her of being a member, or sympathizer, of the outlawed Muslim Brotherhood. Rabab denied the accusation, arguing she “only does not like how things are now in the country.” 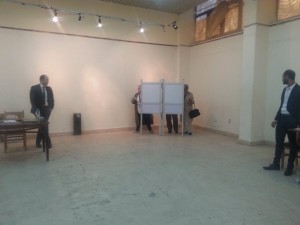 Rabab said she spoiled her ballot as a sign of protest against the “former regime remnants [i.e., the Mubarak regime] who are all running in these elections” and in defiance of the “many repressive policies the current regime uses to silence young dissidents.” As an example, she mentioned the protest law, issued by interim President Adly Mansour in 2013, which requires prior approval from security authorities for holding demonstrations.

Many young activists in Egypt share Rabab’s fear of political misrepresentation, like a 27 year-old former activist and photojournalist, who declined to give his name. The activist said he decided to boycott the process and had given up on his political activism, “because there are no opponents on the political scene who could voice the revolutionary demands of the January 25 Revolution.”

“In the eyes of the public and mainstream media, you now have to be one of two things, either a regime supporter, or a member of the Muslim Brotherhood. I do not support either, yet, I cannot find any candidate that could possibly represent me, so why bother to vote?” he shrugged.

At the same school, an electoral judge expressed his “frustration” over the absence of young voters, noting that the ages of most voters ranged from 50 to 80. He wished younger voters would contribute to the political process “as they are the ones who will build the country and end the state of polarization the nation is now suffering from.”

In Zamalek, an upper-class neighborhood of Cairo, few voters showed up, yet the absence of young voters in two polling stations set for women voters was still evident. Most voters there were between 40 and 70years old. Nadia, a 64-year-old retired accountant, voted for a young female candidate, “because Egypt needs more women, more fresh and young blood, and more representation of religious and social minorities.” 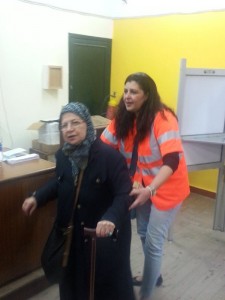 Most of the women interviewed at these two polling places said they voted for the Republican Alliance of Social Forces, led by Tahany al-Gebali, former vice-president of the Supreme Constitutional Court of Egypt. (The Republican Alliance list is contesting seats only in Cairo.) One said, “It will aid the president accomplish his very difficult tasks, and fulfill his promises of social and economic progress”.

However, other voters in Zamalek did not give specific reasons why they were voting for certain candidates and lists. Some admitted they didn’t know much about them and had not even checked electoral programs. Several voters expressed their fear of Islamists taking over the next parliament. Nahed, 40, said, “To be honest, I have not read much about the list I voted for today, but I know it’s led by Tahany al-Gebali, and more importantly, I know they are not part of the Muslim Brotherhood.”

Very few of the voters interviewed cast their votes for the “For the Love of Egypt” list, a coalition supportive of the current regime and favored by mainstream media. The list is led by Sameh Seif al-Yazal, a former intelligence officer and chairman of a pro-government think-tank. During the first phase, For the Love of Egypt managed to secure 60 seats, garnering 53.5% of votes in Upper Egypt and 58% in West Delta.

In another ballot station in downtown Cairo—this one for men only—150 out of 1,729 registered voters turned up. George, a 75-year-old retired government employee, said he voted for For the Love of Egypt, hoping for “a better future, and a secure country that is not torn apart by terrorism or religious extremism.”

As the first day of voting during the second phase came to an end, the heavily secured ballot stations scattered around Tahrir had failed to attract more voters, and in particular youth remained absent. Given the traffic, it seemed like potential voters had more pressing issues to attend to.