Polarization in Suez and Ismailia

In the first phase of Egyptian parliamentary elections, held last month, the turnout rate of 26.6% was marked by an even lower rate of voting among the youth. In Suez and Ismailia—voting, along with half of Egypt’s provinces, in the second phase—the pattern held on the first day of voting, with the same absence of young voters in elections for a new House of Representatives.

In Ismailia, voter Zakaria al-Refaie, 67, said “Young generations did not learn nationalism and to love their country. My generation experienced several wars in which our country’s destiny was on the edge of a cliff. I was a soldier in the Yemen war. I have seen our defeat in 1967 and our victory in 1973.”

Zakaria continued, “The Egyptian military did a great favor for the country by ousting the Muslim Brotherhood; if they had remained in power for the full course of the first presidential term they would have had the chance to root themselves and turn Egypt into a theocratic state. One year was enough to understand what a terrible mistake we had made by electing them to office.”

Mahmoud, 27, escorted his disabled father in a wheelchair out of the polling station. Although Mahmoud did not vote, he decided to accompany his father to the polling station. Mahmoud said, “I’m in deep political disagreement with my father. I don’t see any reason to vote in this election. Most of the candidates running are former National Democratic Party members. Voting in the current election is a betrayal to any of the revolutionary values that we ever had.”

As Mahmoud highlighted their disagreement, his father Ahmed, 52, had a different opinion. “Young people don’t have the same quality of life we were given. They are also frustrated by the lack of good education and employment. Once a man is married and has kids he will be interested in how schools and hospitals are run, and that’s why I’m voting. I don’t have a political ideology or preference; I only want to see a functioning government supervised by an elected body.” 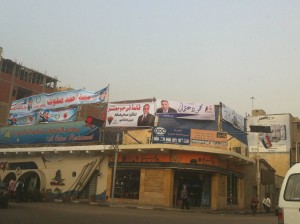 Suez is known as a revolutionary city. The first causality that took place during the Egyptian revolution in 2011 was in Suez. Revolutionary organizations were widely active until recently. Many members of the April 6 Youth Movement—a longtime activist group—have been arrested and jailed over the past three years, and several founders of the movement are currently in prison. Mina and Adel are two twentysomething members of April 6 in Suez. “We had four colleagues here in Suez who were detained in the past three months alone and we are expecting more to join them. The April 6 Movement is boycotting this election for many reasons, mostly because the prevailing conditions are not very promising. The space for freedom of expression and political participation has been shrinking unprecedentedly, even compared with Mubarak’s regime,” said Mina.

“People think the narrative will run like this: The elected parliament will advance the president’s agenda, investments will be directed to the Egyptian market, Egypt will defeat terrorism, the country will be stable, and everyone will live happily. But it’s not going to happen like that. The country is heading toward bankruptcy, the economy is collapsing, and nothing increases Egyptians’ widespread dissatisfaction more than when the prices of goods and supplies increase. I’m expecting a new social uprising,” Adel said.

In the small village of al-Maskhouta in a rural part of Ismailia, Hagg Ahmed Abdel Latif, 52, expressed another reason for why young people are not voting: “Most of the Egyptian population is under 27 years old. The young who are boycotting for political reasons are a small minority, an absolutely elitist and intellectual bunch. The truth is that the majority of Egyptians generally and the young specifically are illiterate. Even those who go to school can’t read or write properly. Most young Egyptians are not voting because they are unaware, illiterate, and disengaged. Period.”

Hagg Ahmed’s wife joined him to cast her vote in the same polling center. She said “I think young people are not voting because they don’t want democracy; they have too much energy, directed by western countries, to spread chaos. Do you think if any of them were the president tomorrow he would be able to fix things? The HEC announced a fine of 500 Egyptian pounds on voters who are boycotting and I hope they will enforce it. As Omar Suleiman (former President Hosni Mubarak’s vice-president) said, the Egyptian people are not ready for democracy!”