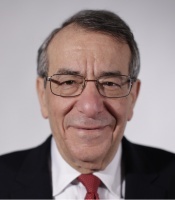 Ziad J. Asali, M.D., is the President and founder of the American Task Force on Palestine, a 501(c)3 non-profit, non-partisan organization established in 2003 and based in Washington, DC. Dr. Asali is a long-time activist on Middle East issues. He has been a member of the Chairman’s Council of American-Arab Anti-Discrimination Committee (ADC) since 1982, and has served as ADC’s President from 2001-2003. He served as the President of the Arab-American University Graduates (AAUG) from 1993-1995, and was Chairman of the American Committee on Jerusalem (ACJ), which he co-founded, from 1995-2003. In addition to many appearances in print and television media worldwide, Dr. Asali is a regular speaker at academic centers and international conferences about the Middle East.

Dr. Asali received an M.D. from the American University of Beirut (AUB) Medical School in 1967. Following a distinguished career in medicine, Dr. Asali has focused primarily on American engagement with Palestine, including co-chairing the U.S. Public-Private Partnership, an initiative launched by Secretary of State Condoleeza Rice to promote economic and educational opportunities for the Palestinian people. He is a member of the Board of Directors of the Middle East Investment Initiative. He is also a member of the Executive Committee of A Different Future as well as a member of the Trustees Advisory Council of OneVoice.