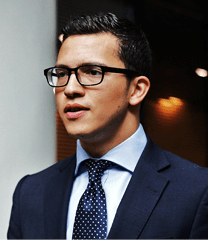 Imad Mesdoua is a political analyst specializing in North Africa, the Sahel, and West Africa. He has previously worked as a political risk analyst and as a consultant in the Middle East and North Africa region advising political officials on policy and communication. Mr. Mesdoua has appeared before various government hearings and regularly attends security conferences as a speaker. He provides on-air analysis as a guest commentator for the BBC, Al Jazeera, and France24. Mr. Mesdoua holds a master’s degree in international public policy from the University College London.