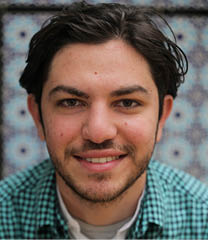 Mosa’ab Elshamy is a Cairo-based freelance photojournalist who specializes in news, politics, and current affairs. He has covered the Egyptian revolution and the latest Gaza war, as well as in-depth photo stories on socioeconomic and cultural issues. Elshamy’s images have been featured in TIME, the Economist, Harper’s Bazaar, and Foreign Policy, as well as on Al Jazeera.
In 2012, he won the Egypt International Photography Contest and Arab Union of Photographers competition and was shortlisted for numerous awards, including the Terry O’Neil award, Hasselblad, and Professional Photographer of the Year. His photography has been exhibited in Egypt, Germany, and England.