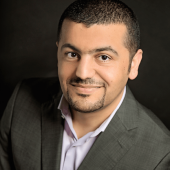 Hassan Hassan is a Senior Nonresident Fellow at TIMEP focusing on militant Islam, Syria, Iraq, and the Arab Gulf states. He was previously an associate fellow at Chatham House’s Middle East and North Africa Program in London and, before that, a research associate at the Delma Institute in Abu Dhabi and a deputy opinion editor for the National, an English-language daily in the Middle East.

Mr. Hassan is the author, with Michael Weiss, of the internationally acclaimed ISIS: Inside the Army of Terror, a New York Times bestseller chosen as one of the Times of London’s best books of 2015 and the Wall Street Journal’s top 10 books on terrorism. The book has also been translated into more than a dozen foreign languages. Working in journalism and research for over a decade, Mr. Hassan has written extensively on Sunni and Shi’a movements, society, and geopolitics in the region for the Guardian, Foreign Policy, Foreign Affairs, and the New York Times, among others.

He advises senior policymakers in the United States, Europe, and the Middle East, has testified before Congress on extremism, and appeared on flagship television and radio programs such as the O’Reilly Factor, Amanpour, and the Last Word with Lawrence O’Donnell. A native of eastern Syria, Mr. Hassan received an M.A. in international relations from the University of Nottingham. You can follow him on Twitter: @hxhassan.