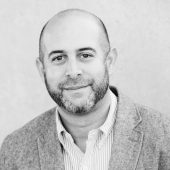 Jud Nirenberg is the Development Manager at TIMEP.  He has held development roles at a wide range of organizations, such as the US Association for UNHCR, Jane Goodall Institute, 1Libya, and others, joining TIMEP after working as an asylum officer for the U.S. government. His published work on human rights, political organizing and the history of the Romani people earned him the 2017 Baxt Award. He studied for a BA in international politics at The American University and at the MBA program at the École Supérieure de Gestion in Paris. He also has a certificate in leadership development methods from Harvard University’s Kennedy School.