The court opens the hearing for sentencing in the courtroom of the Higher Regional Court on April 14, 2021. (Photo by Thomas Frey/picture alliance via Getty Images)

On July 1, 2021, the Tahrir Institute for Middle East Policy (TIMEP) joined a coalition of renowned institutions, experts, and academics in a motion before the Higher Regional Court in Koblenz, Germany to call upon the court to record and tape the final stage of the historic trial proceedings currently before it—the world’s first-ever Syrian state torture trial. Recordings of this significance have the potential to play an essential and unique role in centering survivors’ testimonies, contributing to documentation efforts, and paving the way for future transitional justice and accountability goals.

TIMEP signs on to this motion as part of the institute’s commitment to turning the law into a powerful tool for change in the Middle East and North Africa through the work of its Legal Unit. The Unit has monitored this trial closely, produced research on accountability in foreign courts, and unpacked transitional justice concepts through unique programming.

Berlin/Koblenz, 1 July 2021 – Even though the first trial worldwide on state torture in Syria is historically significant there is no official documentation of the proceedings at the Higher Regional Court in Koblenz. To change this, 23 German and international academics, research institutions and human rights organizations, together with the European Center for Constitutional and Human Rights, sent a motion to the court today. They demand to tape the final stage of the proceedings, e.g. the closing statements and the announcement of the verdict, to preserve them for future generations.

“The Auschwitz trials, the Stammheim trial and numerous international criminal proceedings demonstrate that the documentation of such historic trials, also through original recordings, are a highly valuable contribution to addressing the past, to education of future generations and not the least for research purposes. The recordings of the Syria trial could play an equally important role”, says Florian Jeßberger, professor for criminal law and modern legal history at Humboldt-Universität zu Berlin and one of the petitioners.

In Germany, legal proceedings are usually neither recorded, filmed, nor documented word-for-word in writing. However, German courts can order recordings of trials of outstanding historic significance for scientific and historical purposes. The recordings are then archived and can be made available upon request. The Koblenz court has already dismissed motions on audio recordings twice for reasons of impact on witness testimonials. However, this reason does not justify the full dismissal of audio recordings.

“The al-Khatib trial is undeniably a milestone in the history of international criminal law – it is the first step to address the crimes in Syria. For the first time, the Syrian state torture system and the Assad regime’s crimes the international community has been dealing with for decades are investigated and prosecuted” says Wolfgang Kaleck, ECCHR’s general secretary.

Because there is no official documentation, civil society organizations such as ECCHR or the Syria Justice and Accountability Center monitor the trial and publish reports of every single hearing. However, only audio recording allows for an exhaustive and objective documentation to fully understand the trial’s significance and the involved parties’ motivations.

Mansour Omari, Syrian journalist and human rights defender, adds, “especially for us Syrians, it is essential to preserve the trial for future generations. The proceedings in Germany can form the basis for addressing the crimes committed in Syria, for the healing processes of the next generations and to establish a collective memory.”

The documentation of criminal proceedings can have a key function for societies as a whole to address systemic injustices. Thus, all international criminal courts record their proceedings. In 2017, UNESCO also declared the Auschwitz trial records a Memory of the World document.

The motion was filed by among others: 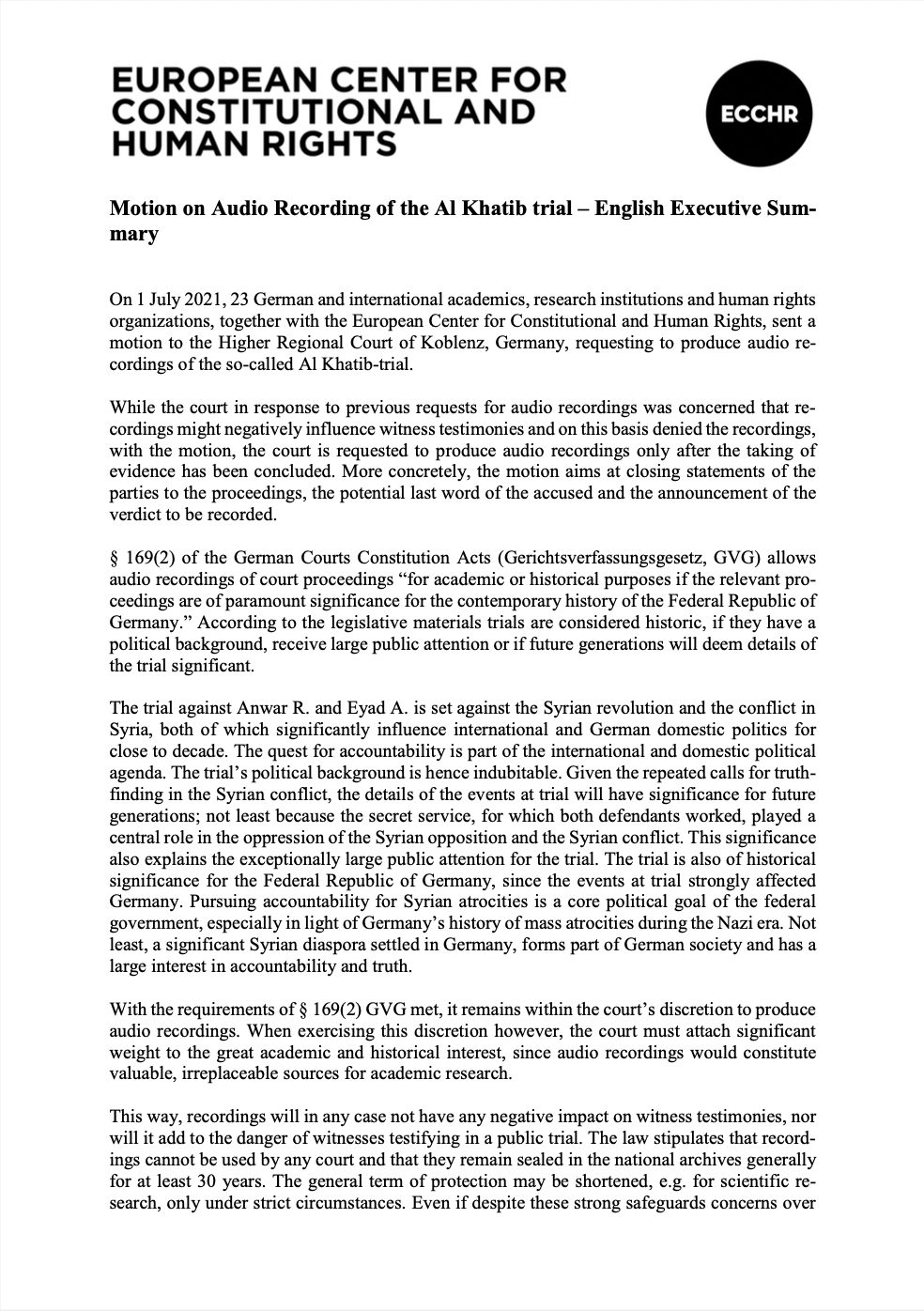