On January 8, the newly formed National Election Authority (NEA) announced its elections timetable, with applications for candidacy open between January 20 and 29. This period also included deadlines for elections monitoring and media registration, which were to have been received by January 15 and 22, respectively.

Candidates were required to procure at least 25,000 endorsements from citizens in at least 15 governorates—or at least 20 endorsements from members of the House of Representatives to be eligible to contest the election. (For more details on the Laws and Procedures governing the election, including a timeline, see our Factsheet .) Sitting President Abdel-Fattah El Sisi garnered support from at least 549 parliamentarians, and well over the necessary 25,000 endorsements from the public. In a last-minute announcement, and amid reports of government urging, Ghad Party leader Moussa Mustafa Moussa submitted the paperwork for his candidacy; Moussa received the support of 26 parliamentarians and a reported 43,000 individuals in a matter of hours.

The fact sheet here describes the various individuals who announced their intention to contest the elections, the response to that announcement, and other relevant information about their campaigns. 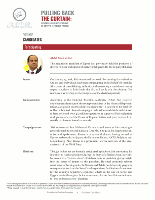