The primary laws and regulations governing Egypt’s presidential elections include the 2014 Egyptian Constitution, Law No. 198 of 2017 on the National Election Authority (NEA), Law No. 45 of 2014 on the exercise of political rights, and Law No. 22 of 2014 on presidential elections, in addition to the decrees issued by the newly created NEA specific to the 2018 election. The NEA has the power to set the timetable for elections procedures, define regulations for national elections such as the presidential race, and announce the winner of these contests.

Timetable
January 9-29 Citizens will sign endorsements for potential candidates.
January 9-22 Organizations, including nongovernmental organizations, will apply to the NEA to monitor the election.
January 20-29 Candidates will apply to run if they have received the necessary endorsements.
January 31 A preliminary list of candidates will be issued.
February 24 Following several levels of possible legal appeals for or against candidates, the final list of candidates will be issued.
February 24-March 23 Candidates will campaign nationally.
March 16-18 The first round of voting will be held for Egyptians abroad.
March 26-28 The first round of voting will be held across Egypt.
April 2 Results of the first round of voting will be announced.
April 19-21 If no candidate receives more than 5- percent of the first-round vote, a runoff will be held between the top two vote getters, beginning with voting held for Egyptians abroad.
April 24-26 Runoff voting will be held across Egypt (if necessary).
May 1 The final results of the runoff will be announced (if necessary).
Candidacy Requirements
Article 141 of the constitution states, “A presidential candidate must be an Egyptian born to Egyptian parents, and neither he, his parents, nor his spouse may have held other citizenship. He must have civil and political rights, must have performed the military service or have been exempted therefrom by law, and cannot be younger than 40 years on the day that candidacy registration is opened.”
According to Article 142 of the constitution, to become a candidate a person “. . . must receive the recommendation of at least 20 elected members of the House of Representatives, or endorsements from at least 25,000 citizens who have the right to vote, in at least 15 governorates, with a minimum of 1,000 endorsements from each governorate.”[1]
Campaign Regulations
Candidates’ campaigns will only be allowed to spend 20 million Egyptian pounds (LE) for campaigning nationally, and to accept campaign donations of up to two percent of the total allowed campaign expenditures.[2]
Law No. 45 of 2014 constrains the content of campaigns, including prohibitions on the use of religious slogans, calls for discrimination, or threats to national unity.
Declaring Results
The Presidential Elections Law states that the candidate obtaining the absolute majority of votes shall be proclaimed president. In an election in which there is only one candidate, the candidate shall be elected president if he or she obtains a total number of votes equivalent to five percent of the total number of voters in the voters registry. If the candidate does not receive this required five percent, the NEA shall reopen of nominations for new elections within no more than 15 days of the election results announcement.
Monitoring Regulations
According to the National Election Authority Law, elections through 2024 will continue to be overseen by judges monitoring each polling place, with the commission’s staff taking over monitoring duties following that date.
The NEA will allow select Egyptian NGOs to monitor the elections. Those NGOs must, according to the NEA, have a good reputation and be known to be impartial and to have integrity. NGOs must also have prior election monitoring experience, and their monitors must be registered in the voters registry.
The NEA has the right to extend invitations to embassies, international and regional unions, and foreign bodies and commissions involved in elections to monitor the presidential election. The NEA will review requests from foreign and international NGOs seeking to monitor the elections, saying those groups must have good reputations and be known to be impartial and to have integrity. They must also have election monitoring, human rights, and support for democracy in their scope of work, as well as prior election monitoring experience.
For Egyptian NGOs, the logistical requirements and paperwork necessary for becoming an NGO monitor includes proof that the organization is registered with the relevant ministry. The commission is authorized to ask NGO monitors for any additional paperwork beyond the requirements explicitly listed in the decree.
Monitors will be allowed to spend a maximum of 30 minutes in each voting station they visit. Monitors will be expected to report their observations to the NEA and ultimately to submit to the commission final reports that are impartial and that detail the negatives and positives of the process.
[1] As the 2014 elections were held in the absence of a parliament, endorsements from members of the House of Representatives serve as a new avenue for candidates to fulfill the constitutional requirements to place their names on the ballot.

[2] An additional LE5 million may be spent to campaign in the event of a runoff. 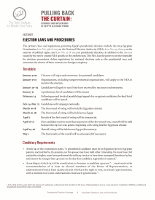