The first phase of the period included the introduction of not only a legal framework that tipped the playing field toward Sisi by establishing a truncated timeline and high barriers to entry, but also repressive and violent efforts to neutralize opponents by whatever means necessary. Egypt’s security, legal, legislative, and media institutions all played a role in these efforts, discrediting, jailing, and even physically attacking candidates and members of their campaign teams. Finally, facing the possibility of a referendum that would allow the possibility of a “no” vote against the incumbent, several new candidates emerged at the eleventh hour, almost simultaneously declaring their support for Sisi’s reelection as well as their own intention to join the race. Occurring amid reports of state urging, the naming of a second candidate thus provides not even an illusion of a legitimate challenge to Sisi’s power.

These repressive measures notwithstanding, the period also included genuine resistance, both to Sisi and to the compulsory nature of his reelection. Some candidates made genuine efforts to propose alternative campaign platforms and, when these were repressed, leading opposition figures called for a boycott; though there is little belief this will fundamentally affect the election outcome, it demonstrates a sustained willingness to accept the risks of repression in order to challenge the status quo.

On January 8, the newly formed National Election Authority (NEA) announced its elections timetable, with applications for candidacy open between January 20 and 29. This period also included deadlines for elections monitoring and media registration, which were to have been received by January 15 and 22, respectively.

Candidates were required to procure at least 25,000 endorsements from citizens in at least 15 governorates—or at least 20 endorsements from members of the House of Representatives to be eligible to contest the election. (For more details on the Laws and Procedures governing the election, including a timeline, see our Factsheet.) Sitting President Abdel-Fattah El Sisi garnered support from at least 549 parliamentarians, and well over the necessary 25,000 endorsements from the public.[1] In a last-minute announcement, and amid reports of government urging, Ghad Party leader Moussa Mustafa Moussa submitted the paperwork for his candidacy; Moussa received the support of 26 parliamentarians and a reported 43,000 individuals in a matter of hours.

[1] Sisi’s campaign spokesman claimed that Sisi presented 173,000 endorsements with the paperwork for his candidacy. However, unnamed government sources have told the media that Sisi had about 900,000 endorsements on January 24. This number is likely to increase before the final count is revealed.

[2] Even after having withdrawn from the race, Anan’s team continued to face harassment. Hisham Geneina, one of Anan’s running mates and the former head of the Central Auditing Organization, was attacked outside his home. 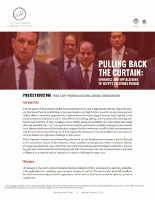