Every year, the United States Congress appropriates billions of dollars to support foreign security forces by supplying training and equipment in an effort to maintain foreign policy and national security objectives. However, few avenues exist to hold foreign governments and militaries accountable for misusing the equipment, raising concerns about American complicity in human rights abuses across the globe. Several laws place restrictions on weapons provision to countries who commit human rights abuses, but the process for implementing these restrictions is often politicized, placing short-term priorities over long-term stability. For major arms buyers such as Israel, Egypt, and Saudi Arabia—where evidence exists that U.S.-manufactured equipment has been used in human rights abuses—this tradeoff threatens both domestic and regional stability in an already volatile region. 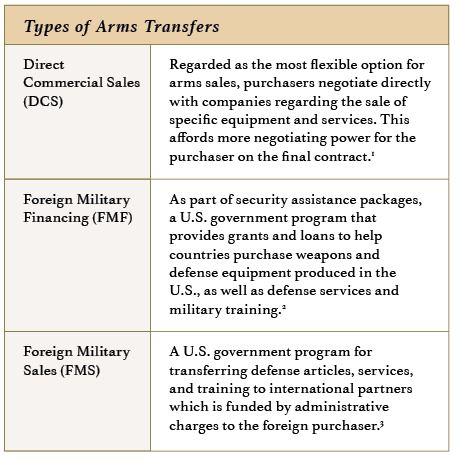 Similarly, growing awareness of violations by Saudi Arabia has raised questions about U.S. adherence to the Arms Export Control Act of 1976 (AECA) and Leahy Law (further details provided later in this brief), given that as of March 2019, Saudi Arabia had over $129 billion in active arms sales agreements with the U.S. A 2017 report by the American Bar Association (ABA) analyzed U.S. security assistance to Saudi Arabia under the AECA in light of growing evidence of gross human rights violations (GHRVs) at the hands of the Saudi regime. U.S. weapons sold to the Saudi regime have been used in Yemen, contributing to high civilian casualties as the result of indiscriminate bombing campaigns. There is evidence that U.S. arms shipments have been funneled to militias and extremist groups in Yemen, including al-Qaeda in the Arabian Peninsula, by Saudi Arabia and its coalition partners.

The ABA report concluded that all arms sales to Saudi Arabia should stop until measures have been taken to ensure compliance with U.S. export laws and international law. Although the assessment found that the U.S. government was in violation of its statutory obligations, arms sales to Saudi Arabia are still a point of contention among policymakers. In March 2019, a group of bipartisan lawmakers passed legislation that called on President Donald Trump to end U.S. support to Saudi Arabia; Trump vetoed the bill. In May 2019, Trump announced that he would be invoking an obscure clause in the AECA in order to bypass congressional review of new arms sales to Saudi Arabia. The clause requires that he certify the sales are necessary in the case of a national security “emergency;” this action has drawn harsh criticism from members of Congress.

Each year, the U.S. appropriates $1.3 billion in foreign military financing (FMF) to Egypt. Although human rights abuses in Egypt have been detailed in the State Department’s annual Country Reports on Human Rights, a national security waiver has been issued to ensure Egypt receives U.S. security assistance in successive Democratic and Republican administrations. In 2018, Secretary of State Mike Pompeo issued a four-page waiver that outlined a myriad of human rights violations, including extrajudicial killings, censorship, and coerced confessions. However, the waiver noted that Egypt’s control of the Suez Canal and overflight approvals in support of counter-terror operations benefit the U.S., and that the FMF is required under the Camp David Accords. 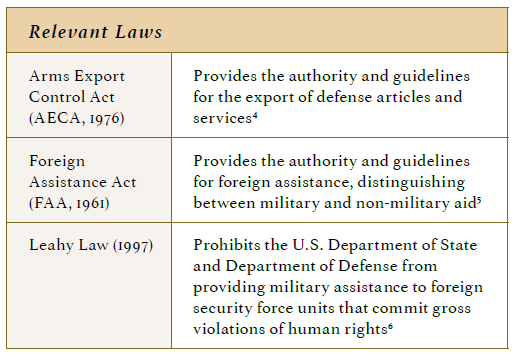 In the United States, the Arms Export Control Act of 1976 (AECA) and the Foreign Assistance Act of 1961 (FAA) are the guiding statutes for U.S. security assistance to foreign countries. Together, the two laws regulate arms transfers, arms sales, security training, and the transfer of nuclear technology. The laws also dictate conditions in which the U.S. should not provide security assistance. Among such conditions is the human rights situation of the foreign country slated to receive U.S. security assistance. Specifically, Section 502B of the Foreign Assistance Act (FAA) stipulates that the U.S. is prohibited from providing military assistance to “any country the government of which engages in a consistent pattern of gross violations of internationally recognized human rights.” However, policymakers often view[7] Section 502B as overly restrictive due to the broad language that any country whose government engages in human rights abuses will be denied U.S. assistance. If a country was blacklisted by Section 502B, the law did not provide any steps by which the country in question could regain security assistance. As a result, many lawmakers have complained the law has been a hindrance to achieving U.S. foreign policy objectives in some areas, and Section 502B has seldom been enforced.

In an effort to make Section 502B more flexible to U.S. foreign policy and national security interests, congressional officials, led by Senator Patrick Leahy (D-VT), introduced the “Leahy Law” into annual appropriations bills in 1997, and was made permanent in 2008 by adding similar language to the Foreign Assistance Act in 2008. Added to Section 502B, the Leahy Law includes two amendments that govern security assistance provided by the State Department and Department of Defense. Although separate amendments, both include language that states “no assistance shall be furnished under this Act or the Arms Export Control Act to any unit of the security forces of a foreign country if there is credible information that such unit has committed a gross violation of human rights.” The law also provides a remediation process for foreign security units that have been blacklisted, allowing them to regain the privilege of U.S. security assistance. By narrowing the scope to the unit level of foreign security forces, many policymakers feel the Leahy Law provides the necessary flexibility to uphold U.S. morals while prioritizing national security and foreign policy. Despite its best intentions, however, the Leahy Law is rarely utilized.

Aside from security assistance, the AECA also governs export licensing. Typically, the president, in coordination with the secretary of state, must notify Congress of any sale of defense articles or services under for $50 million or more, any design and construction services for $200 million or more, or any major defense equipment for $14 million or more, and allow Congress 30 days to review the sale and register concern. However, the law also includes a clause[8] allowing the president to override congressional oversight of a sale if the president “states in the certification that an emergency exists which requires the proposed export in the national security interests of the United States.” 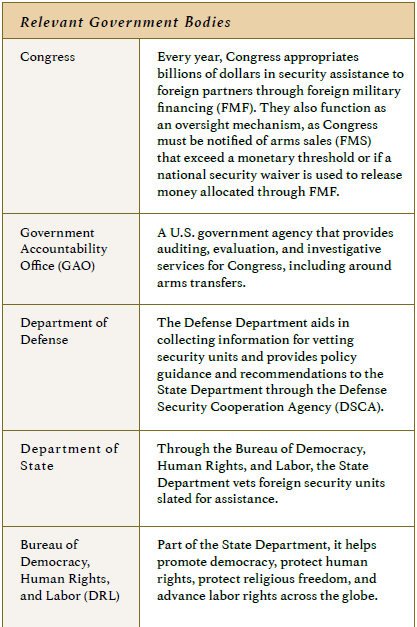 The agencies in charge of enforcing Leahy Law are the State Department and occasionally the Department of Defense.  As previously mentioned, the text of the Leahy Law is intended[9] to ensure human rights vetting for all assistance and training, including that which falls under the Arms Export Control Act. This includes foreign military sales (FMS), foreign military financing (FMF), and direct commercial sales (DCS). However, in practice, the State Department has only applied the law to most training programs and some equipment furnished through assistance programs, but not direct arms sales. Although the State Department does review licensing that falls under DCS, they do not weigh in matters pertaining to Leahy Law.

Gaps also exist during the implementation and vetting process. When foreign security units are slated to receive U.S. security assistance, in-country embassy personnel conduct initial vetting using open-source data and information provided by officials from the foreign security apparatus. The information is subsequently passed to personnel at the State Department in Washington in the Bureau of Democracy, Human Rights and Labor (DRL) and taken into consideration along with classified information collected by DRL staff. Although straightforward, the process has been known to be marred by a lack of transparency and obstacles to thorough vetting, as exemplified in a 2016 Government Accountability Office (GAO) report[10] on U.S. security assistance to Egypt. The report found that Egyptian officials were uncooperative with security checks and end-use monitoring. The report also found that the State Department did not conduct Leahy Law vetting for human rights abuses in all cases of arms transfers and training to Egyptian military forces. It is unclear what actions, if any, have been taken to remedy the concerns outlined in the report.

In their current form, legal mechanisms for accountability in arms transfers (namely the AECA, FAA and Leahy Law) are weakened by policies that regularly place human rights, application of the law, and long-term stability aside in favor of short-term national security objectives. As mentioned above, this tradeoff is best exemplified by the continual use of national security waivers to continue providing arms to foreign security forces despite human rights abuses. While the waiver of human rights conditions stipulates that aid may be restored if the “provision of assistance is vital to the national security interests of the United States,” the term “national security” is left undefined, allowing for a broad interpretation.

For countries that receive U.S. security assistance, the implications for the civilian population and overall stability of the country are most concerning. Aside from the direct human cost of the use of deadly force against civilians, scholarly research [11] has demonstrated that security assistance to “fragile states” may encourage the government to rely on repressive means in response to dissent and threats to domestic security, thereby closing off channels of peaceful expression of popular will, risking further insecurity. Additionally, the inability to document end use, and (as is the case in Yemen) the turnover of American-made materiel to armed nonstate actors, further risks U.S. national security interests. 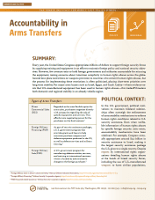