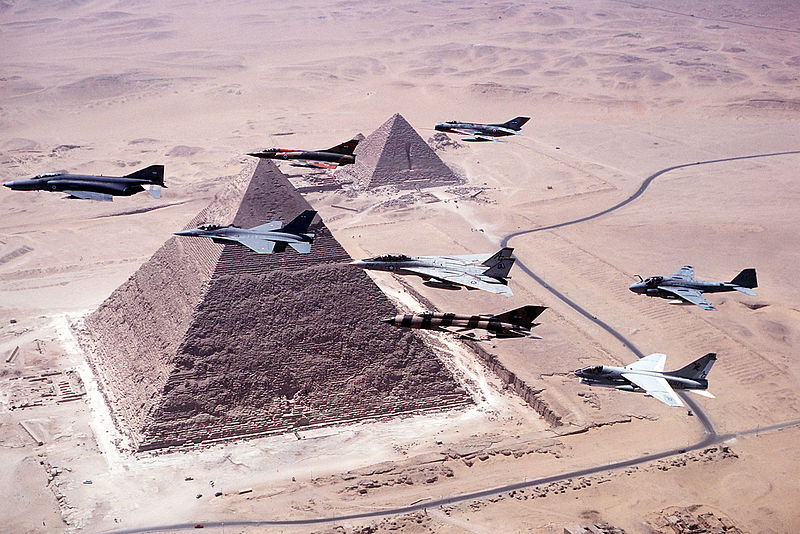 An air-to-air left side view of U.S. and Egyptian aircraft over the Pyramids during Exercise Bright Star '83. (Joint Service Audiovisual Team)

UPDATE, September 7, 2017: On September 6, the office of Senator Patrick Leahy (D-VT), vice-chairman of the Committee on Appropriations, issued a summary of the Senate’s State, Foreign Operations, and Related Programs Subcommittee (SFOPS) fiscal year 2018 spending bill. With regard to Egypt, the bill proposes the allocation of $1 billion in security assistance, a $300 million cut from the levels enacted in past years, and from those proposed in the House version of the bill and requested in the Executive Budget. The bill also conditioned 25 percent of this security assistance on democracy and human rights conditions, with the option of a waiver in the interest of national security.

Regarding economic support funds (ESF), the bill proposed a reduction in funds, offering $75 million. (The House version proposed $150 million, and the executive budget $75 million.) The figure corresponds with the Senate’s ESF allocation in its FY17 appropriations bill, and is lower than the figure enacted by the FY17 Omnibus. These funds have been difficult to obligate in past years because of obstacles from the Egyptian government, as detailed later in this briefing.

While the administration’s approach toward relations with Egypt has been a series of contradictory actions of support and criticism combined with an ongoing campaign to cut foreign assistance programs worldwide, the Senate has consistently pushed for adjustments to Egypt’s aid package per its concerns over human rights and aid effectiveness. In an April hearing on U.S. assistance to Egypt, bipartisan voices criticized the effectiveness of Egypt’s FMF package in addressing its security threats, obstacles to disbursing economic aid to partners on the ground, and the escalation in the Egyptian government’s crackdown on human rights. The Senate also took the lead during the FY17 appropriations process by deviating from the Obama administration and the House of Representatives to keep democracy and human rights conditions on FMF, halve ESF to $75 million, and empower the administration to reprogram backlogged ESF funds.

The Senate SFOPS bill closely aligns with the administration’s stance in withholding assistance as a point of leverage in pressuring for greater progress on democracy and human rights, by reducing and conditioning more funds that traditionally go directly to the Egyptian military. The reduction in ESF continues a trend of reduction as a result of the difficulty in obligation.

The Senate and House bills will need to be reconciled before being voted on and signed into legislation; in FY 2017, the Senate’s version of the bill, with regard to Egypt, most closely resembled the final Omnibus language.

The bill goes to full committee markup on September 7, 2017.

UPDATE, August 30, 2017: The reprogrammed $65.7 million in foreign military financing (FMF) corresponds with a figure withheld from the fiscal year 2014 FMF. In April 2014, Senator Patrick Leahy (D-VT), then chair of the Senate’s State, Foreign Operations, and Related Programs subcommittee, refused to sign off on the obligation of $650 million in FY14 funds that had been suspended by the Obama administration after the massacre of hundreds of Egyptians during the sit-ins at Raba’a al-Adaweya and Nahda Squares. Leahy called Abdel-Fattah El Sisi’s government a “dictatorship run amok,” referencing a trial in which death sentences were issued to 683 people. (Although Leahy was the deciding factor in this decision, it was not based violations of the “Leahy Law.”) The bulk of this figure was later released, leaving behind $65.7 million in FY14 funds that remained obligated, but shelved away from the Egyptians. The Trump administration has thus made the decision to reprogram these funds in FY17, to be designated for delivery to another country in the region that would not “undermine Egypt’s security.”

The Trump administration has continued to emphasize that the NGO Law is its primary concern among Egypt’s human rights issues, along with a greater context of violations that has included travel bans for human rights defenders, and the continuation of Case 173, under which the Egyptian government has harassed and targeted human rights defenders and civil society organizations.

UPDATE, August 24, 2017: The announcement of the reprogramming of $65.7 million in foreign military financing (FMF) funds appears to refer to funds appropriated in fiscal year 2014. (Our initial report below conveyed reports from Reuters that these were funds from FY17.) The Consolidated Appropriations Act of 2014 stated that funds may be made available to Egypt, which could potentially allow them to be reprogrammed if they are not used. If the $65.7 million figure is indeed from FY14, it is likely to be held as a result of Leahy Law stipulations that bar foreign assistance to countries that commit human rights violations. According to a State Department press briefing on August 23, these funds will be designated for delivery to another country in the region that would not “undermine Egypt’s security.”

ORIGINAL BRIEFING, August 24, 2017: On August 22, Reuters broke a story that United States officials had decided to “withhold” $95.7 million in foreign assistance to Egypt, and to delay an additional $195 million. The reason for the decision was reported to be Egypt’s failure to make progress on democracy and human rights conditions, with particular attention given to the passage of a new law restricting the work of nongovernmental organizations in May, though the report did not give much in the way of additional context.

Additional information added to the Reuters story later revealed that of the $95.7 million initially reported to be withheld, $30 million would be assistance reprogrammed from Economic Support Funds (ESF) that were appropriated for fiscal year 2016, and the rest from Foreign Military Financing (FMF) appropriated for FY17. (ESF are funds dedicated to providing assistance for democracy, capacity building, investment in human capital, and other development initiatives, whereas FMF is allocated toward military equipment and training.)

The $195 million figure being “delayed” aligns with the 15 percent of FMF funds automatically withheld based on FY16 Omnibus legislation, requiring the secretary of state’s certification of progress made on specific human rights and democracy conditions by September 30, 2017. Conditions on FMF to withhold the obligation of funds to Egypt first appeared in FY12. The stipulation was given some teeth when the Consolidated Appropriations Act of 2016 required that 15 percent be automatically withheld pending the secretary’s certification of progress on the rights conditions. With the exception of 2014, each year these conditions came with the possibility to waive certification in the event that doing so would be in the interest of U.S. national security, which was used to release the $195 million in FY12, FY13, and FY15. TIMEP covered these conditions with respect to FY17 appropriations legislation and developments in a previous briefing on the 2017 Omnibus.

Egypt’s regression in democracy and human rights over the past several years has been documented extensively at TIMEP, most recently in our May report “A Fragile Egypt in a Changing World: Six Years after the Revolution.” Though reports indicate that the $195 million is being “withheld,” the Reuters story also clarifies that the national security waiver has been invoked, meaning that the administration is still going through with the delivery of the aid.

Reuters reported that the $95.7 million comprises $30 million in FY16 ESF and $65.7 million in FY17 FMF, and that both of these amounts are being reprogrammed rather than withheld. The 2017 Omnibus allows for unobligated ESF funds to be reprogrammed to other countries should the Egyptian government interfere with them. Until recently, an estimated backlog of between $500 and $700 million remained unobligated on account of the Egyptian government’s resistance to cooperation with partner organizations, political instability, and multiyear commitments associated with higher education programs; this number has since fallen to $400 million.

No provisions in the 2017 Omnibus, nor previous appropriations acts, stipulate the ability to reprogram the $65.7 million of FY17 FMF, and the 15 percent that is withheld must be released or kept in full. There are some provisions in the Foreign Assistance Act of 1961 that allow assistance to be reprogrammed in specific circumstances, but there has been no clarity on which of these applies in this case.

A decision to reprogram FY17 FMF is premature, as the administration has until September 2018 to address reprogrammability, withholding, and certification, and significant questions remain on the scope and legal pathway for the reprogramming. Reprogramming FY16 ESF funds, on the other hand, is given the backlogged funds and congressionally stipulated powers to send them elsewhere.

As for the $195 million in withheld FY16 FMF, Tillerson has entered uncharted territory. He has not certified Congress’ conditions and has reportedly invoked the national security waiver; while this has been the protocol since 2012, what’s different is the actual “withholding” of the funds, at least temporarily, which suggests that their release is contingent upon some unspecified criteria set by the administration.

The way in which the administration has sidestepped Congress’ intent in the law, which involved the 15 percent of aid being withheld as a tool of leverage for specific measures, is of concern. Unnamed officials mentioning only vague parameters on rights and democracy in a series of unclear Reuters reports has created confusion and a lack of transparency as to the conditions under which aid will be released, and with no official statement, this raises concerns over the intent of the “withholding.”

The decision to reprogram and withhold assistance does little to elucidate a cohesive Egypt policy from the Trump administration. Thus far, its actions within the realm of U.S.-Egypt relations have been a series of contradictions, leaving much to the imagination.

When Trump became president, the Sisi regime largely expected warmer relations marked by increased military aid that included the reversal of changes made by the Barack Obama administration, the release of unspent ESF monies to the Egyptian government, and reciprocal visits. Sisi was also hoping that the U.S. would designate the Muslim Brotherhood a terrorist organization and extradite wanted Egyptians residing in the U.S. As of today, these demands remain unmet, as Trump has oscillated between acts of overt support and punitive measures. The administration has restored Operation Bright Star, maintained Egypt’s $1.3 billion in FMF in the budget (amid an environment of severe cuts to FMF across the board), received Sisi in the White House, reduced ESF, declined to designate the Muslim Brotherhood as a terrorist organization, and maintained the Obama administration’s decision to categorize FMF and end cash flow financing. Meanwhile, Trump has yet to appoint an ambassador to Egypt; the chargé d’affaires, Thomas Goldberger, caused some stir in the country after he described a State Department travel warning as having been published without consultation with his local embassy.

Through its actions thus far, the Trump administration has done little to give the sense that human rights are the primary issue behind the withholding and reprogramming of foreign assistance. Nonetheless, even if human rights issues are merely a pretext for withholding aid as a means of achieving other policy objectives, concessions could be made on the part of the Egyptian government as a matter of optics.

On the other hand, should the administration truly aim to use withheld and reprogrammed aid as a tool of leverage on human rights and democratic development, as reports suggest is the intent, then its work is just beginning, and it will need to follow through with pressure to push for specific actions to be taken. It can start with the repeal of the restrictive NGO and Protest Laws, the release of political prisoners, and accountability for acts of torture.