The relationship between the lawyer and his or her client is central to the functioning of the legal system. At every stage, from interrogation to sentencing, this relationship plays a determinative role in a client’s access to a fair trial.

In recent years in Egypt and amid a crackdown on the practice of law, factors affecting judicial and prosecutorial entities, and deteriorating access to legal education, the role and duties of the lawyer have been called into question. It is in this context that the Tahrir Institute for Middle East Policy (TIMEP) releases “Effective Communication between the Lawyer and Defendant and the Right to a Fair Trial: A Guide for Lawyers in Egypt,” authored by human rights lawyer and legal researcher Adel Ramadan.

The guide, which is organized based on the stages of trial, summarizes and simplifies the relevant laws and regulations governing the role of the lawyer within each stage, documents common challenges and what lawyers are anecdotally doing in response, and ends with a series of practical recommendations.

Launched by the TIMEP Legal Unit, the guide is one of a series of tools that the institute is investing in to ensure that young and seasoned lawyers alike have the resources necessary to continue playing a key role in preserving the rule of law in societies across the Middle East and North Africa (MENA) region.

Note: This guide is only available in Arabic as it is a hands-on document directed toward practitioners in-country. 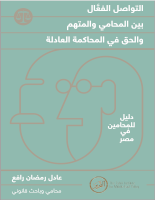