In Targeting the last line of defense: Egypt’s attacks against lawyers, the International Commission of Jurists (ICJ) and the Tahrir Institute for Middle East Policy (TIMEP) call on the Egyptian authorities to immediately end their crackdown on lawyers and unconditionally release all lawyers who are detained or convicted solely on the basis of the peaceful exercise of their human rights and/or the legitimate discharge of their professional duties.

The joint briefing paper documents a course of conduct by state institutions in Egypt that aims to weaken and curtail the legal profession, and thereby dismantle the last line of defense against the government’s sustained crackdown on human rights and fundamental freedoms.

Increasingly since 2013, Egyptian lawyers have been systematically targeted by state authorities for their legal defense work and for exercising their fundamental freedoms. Lawyers have been subject to arbitrary arrest and detention, physical assault, torture and enforced disappearances, as well as politicized criminal proceedings based on charges related to, among others, “terrorism,” “spreading false news,” and “misusing social media.” While attacks on lawyers and, by extension, the legal system have continued unabated in recent years, the paper finds that a spike in such attacks took place in the immediate wake of the September 2019 protests. Despite the immense risk of COVID-19 outbreaks in Egypt’s detention facilities, authorities have continued to arbitrarily arrest and detain Egyptian lawyers.

In addition to detailing the broader trends of attacks against lawyers, the paper showcases a series of emblematic cases of lawyers who have been subject to arbitrary detention in Egypt over the past two years. It is accompanied by an annotated list of 35 lawyers who have been arrested and arbitrarily detained since January 2018.

The paper proposes a series of forward-looking recommendations to Egyptian authorities, including the release of all lawyers detained for exercising their fundamental freedoms or discharging their professional duties, measures to protect the independence of the Bar Association, and reform of relevant legal frameworks, including those governing terrorism offenses and pre-trial detention more broadly

On September 25, 2020, ICJ made an oral statement to the 45th Session of the United Nations Human Rights Council on behalf of TIMEP and itself on Egypt’s systematic crackdown on the legal community. 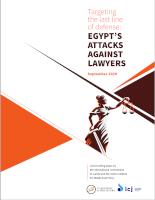