Ahead of the third cycle of Lebanon’s Universal Periodic Review (UPR), the Tahrir Institute for Middle East Policy (TIMEP) and the Committee to Protect Journalists (CPJ) have issued a UPR Advocacy Fact Sheet that complements the joint stakeholder report that the two organizations published in July 2020.

The UPR is a mechanism of the United Nations created to examine the human rights performances of all UN member states; Lebanon’s UPR is set to take place on January 18, 2021.

Much like the joint stakeholder report, the advocacy fact sheet traces the significant deterioration of press freedom in Lebanon. The fact sheet documents:

In an effort to comprehensively address the deterioration of press freedom in Lebanon, this fact sheet proposes recommendations relevant to both the country’s legal framework and its violative practices. 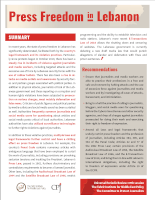