In recent years and particularly since protests began in October 2019, there has been a significant deterioration in the state of press freedom in Lebanon. In an effort to document and assess both the legal framework and violative practices responsible for facilitating this deterioration, the Tahrir Institute for Middle East Policy (TIMEP) and the Committee to Protect Journalists (CPJ) have submitted a joint stakeholder report ahead of the third cycle of Lebanon’s Universal Periodic Review (UPR), set to take place in January and February 2021.

The UPR is a mechanism of the United Nations (UN) created to examine the human rights record of all UN member states. Per the UPR process, the country under review submits a national report and the Office of the UN High Commissioner for Human Rights puts together one report compiling UN information on the country—including reports by the UN special procedures and treaty bodies, as well as a second report compiling information received from stakeholders, including civil society. Lebanon underwent its first UPR cycle in November 2010 and its second cycle in November 2015. 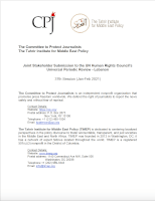 Download PDF
Related Content
2/25 Virtual Event: Ten Years On: Contesting Cyberspace in MENA Exile 02/25/2021
Lebanon’s Universal Periodic Review and Deteriorating Press Freedom Analysis 01/15/2021
The Promise of Open Data in Lebanon Analysis
From Free Space to a Tool of Oppression: What Happened to the Internet Since the Arab Spring? Analysis 12/17/2020
Algeria’s Worsening Crackdown on the Press Amid Transition and Pandemic Analysis 11/17/2020