Background: On April 16, 2019, 531 members of Egypt’s House of Representatives voted to approve a set of constitutional amendments to the country’s 2014 constitution. The amendments will next be voted on in a national referendum slated to take place April 19–21 for Egyptians abroad and April 20–22 domestically. A simple majority is required for the amendments to go into effect.

Significance:  The constitutional amendments would allow President Abdel-Fattah El Sisi to serve a total of at least 16 years, granting him an additional eight years in office beyond the date that his second term was initially set to expire in 2022. This empowerment comes despite concerns that the current state has shown an incapacity to outline a long-term vision needed to sufficiently deal with the complex economic, security, and human rights challenges that Egypt faces. The amendments would further grant the military vague constitutional and legislative authority pertaining to the protection of the constitution, raising questions on how this authority will interact and interfere with that of the parliament and the judiciary. If approved, they will severely compromise judicial and prosecutorial independence, contributing to a system of carrots and sticks in which judges are incentivized to decide cases in favor of the state and in which they are less able to challenge state actions. The amendments would weaken legislative authority by adding a set of appointed parliamentarians who will be hand-selected by the president and not accountable to a constituency.

As a whole, the amendments threaten to continue and formalize the trends observed across Egypt today: a constricted public sphere, the deterioration of the rule of law, and the erasure of the separation of powers. They will thus have severe long-term implications for the nature of the Egyptian state and its foundational stability, both domestically and regionally.

Legal Context: The process through which the parliament approved the constitutional amendments is the latest step amid a larger trend involving legislative rubberstamping of the executive branch’s agenda. An initial draft of the amendments had first been introduced  by the Coalition in Support of Egypt, a parliamentary bloc aligned with the government, on February 3. The proposal was subsequently referred to the General Committee of the House of Representatives and approved on February 5. The House then conducted an initial vote on the proposed amendments on February 14 to determine whether to continue deliberations on the amendments, and the proposal was agreed upon in principle by 485 members; at least 16 parliamentarians officially opposed the initiative. The proposed amendments were then subject to a series of review, feedback, and six dialogue sessions with relevant parties until a final draft of the amendments was produced and the Constitutional and Legislative Affairs Committee .  A common complaint that emerged concerning the dialogue sessions involved reports that participants in the sessions had been hand-selected by the committee for their support of state policies; only some opposition figures were permitted to attend the sessions.

Throughout the amendment proposal and approval process, the government used various tools at its disposal to restrict the space for opposition movements and voices to mobilize against the amendments. In a severe crackdown against individuals expressing dissatisfaction with the performance of the government, authorities forcibly disappeared, arrested, and ordered into detention in Case No. 1739 of 2018 and Case No. 488 of 2019 tens of citizens at the beginning of March—included among them an American citizen and two transgender individuals. When the Civil Democratic Movement, a movement of opposition political figures set up prior to Sisi’s 2018 presidential reelection, attempted to organize a protest outside of parliament’s headquarters to challenge the amendments, a judge in the Cairo Court for Urgent Matters ordered its cancellation for national security purposes.

On April 14, even as the constitutional amendment process was still ongoing, Speaker of the House of Representatives Ali Abdel ‘Al commented on future plans and stated, “We are in need of a new constitution and there is no way that ten years will pass without there being a new constitution,” raising serious questions on the country’s legal stability and its ability to maintain a foundational document, without making changes at each juncture in the country’s modern history.

Political Context: Prior to and following the first parliamentary vote on the amendments, some representatives faced smear campaigns for their criticism of the amendments including Representatives Haytham al-Hariri and Khaled Youssef. Political parties, such as the Free Egyptians Party and the Protectors of the Nation Party, launched promotional campaigns throughout the country to advocate for the constitutional amendments. The Nation’s Future Party, which has the largest political representation in the House, participated in domestic campaign efforts that included the placement of banners to encourage a yes vote in a number of locations, and also held events for Egyptian communities based abroad in the United Arab Emirates, Switzerland, and Germany.

Opposition to the amendments has not been afforded similar opportunities. After publishing a story documenting tactics by security personnel to forcibly obtain donations from local businesses in Cairo to be subsequently utilized as bribes in the anticipated national referendum for the constitutional amendments, newspaper al-Mashhed was slammed with fines and a six-month blocking order. Authorities alleged the website had published sexually explicit material in addition to upsetting public order. Hours after its launch, Egyptian authorities also blocked a website set up to gather signatures in opposition to the proposed constitutional amendments. This online campaign went through four other domains that were subsequently blocked; on the eve of the final parliamentary vote, authorities decided to block the IP address of the website, affecting access to over 34,000 other internet domains in the process. Shortly after prominent Egyptian actors Amr Waked and Khaled Abul Naga—both of whom had been outspoken about the amendments on their social media accounts for months prior—met with policymakers in Washington to discuss the amendments, the Egyptian Artists Syndicate responded by suspending their membership.

Adherence to Legal Norms: If approved, the constitutional amendments usher in a foundational system that threatens to intervene with and violate a number of Egypt’s existing constitutional obligations. Among these existing obligations are a requirement that provisions related to the reelection of the president not be amended unless the amendment brings more guarantees (Article 226), provisions on the independence of the judiciary (Article 186), and articles establishing the mandates of the House of Representatives as the country’s legislative authority (Article 101) and the Supreme Constitutional Court as the only entity competent to determine the constitutionality of laws and interpret legislative text (Article 192).

Both because the amendments threaten to extend the lifeline of a government that has perpetrated severe rights violations and because the environment around the drafting and approval of the amendments has brought about forced disappearances, arrests, and smear campaigns, among other violations, numerous constitutional and international legal obligations are called into question.

Text of the Amendments: The text of the amendments is available in Arabic here. 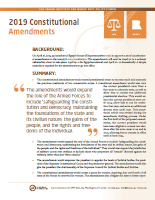