Summary: Egypt’s Christians, who make up roughly 10 percent of the population, have long faced infringements on their rights and been marginalized from political and economic opportunities. Institutional and social discrimination, a problematic legal code, anti-Christian animosity, and sectarian violence all contribute to the Christian community’s marginalization and continue today, despite public shows of support for the Christian community by President Abdel-Fattah El Sisi, including his attendance at Christmas mass.

Political Context: While religion is not reported in official census data, most estimates place Christians at about 10 percent of the population. The majority of Egypt’s Christians are Coptic Orthodox, with some Catholics (a mixture of Eastern and Latin rites), Protestants, and other Orthodox. Despite this, Christians are not able to advance to senior positions in the military, are underrepresented in political life, and face other forms of discrimination at the hands of the state and fellow citizens. Although there were quotas put in place in the last parliamentary elections to attempt to mitigate political underrepresentation, only six percent of the legislature is Christian, with 16 of the House’s 25 standing committees containing voting-eligible Christian members. Similarly, Sisi’s recently installed cabinet and newly appointed governors combined include only three Christian officials, two from the cabinet and one Coptic governor; the cabinet consists of 30 ministers (seven percent Christian) while there are 27 governors nationwide (four percent Christian).

After the ouster of the Muslim Brotherhood-backed president, Muhammad Morsi, by Sisi (who was then defense minister) and the violent dispersal of pro-Morsi protest camps in August
2013, 115 incidents of sectarian violence were documented against the country’s Christian population, including 82 attacks on churches. The reconstruction of these religious buildings became a major campaign pledge and talking point for Sisi and his governments, and all of the destroyed churches have reportedly been reconstructed—the majority by the military and the remainder by the churches themselves. Pope Tawadros II, the patriarch of the Coptic Orthodox Church, aligned himself with Sisi since before Morsi’s deposal, and the two share a closer relationship than any pope or president in memory.

Since Sisi’s assumption of office, however, Christians continue to face sectarian violence. The government has increased security measures in churches, particularly prior to large Christian celebrations or religious ceremonies, though on Palm Sunday in 2017, simultaneous bombings in two cathedrals killed 47 people. In December 2017, a gunman attacked a Coptic Orthodox church and a Christian-owned shop near Cairo and killed 11 people before he was arrested. The Islamic State in Egypt claimed responsibility for those attacks, along with the December 2016 attack on St. Peter and St. Paul’s Church on the main Coptic cathedral compound in Cairo. Since emerging in mainland Egypt, its four attacks on Christians have killed 96.

Sporadic sectarian violence flares up in addition to organized attacks. Such violence is often sparked by attempts to build churches, interfaith romances, or property disputes that become sectarian. In a recent example, on August 13, Copts in the village of Dimshaw Hashim in Minya were subject to sectarian attacks by Muslim villagers, a common occurrence in the province, which has a high percentage of Christians. The incidents included chants of hostile slogans against Copts and the proposed construction of a church, the injury of two Copts, and damage, theft, and burning of several Copts’ houses.

Legal Context: Although the Egyptian Constitution recognizes freedom of belief as absolute and protects the “freedom of practicing religious rituals and establishing places of worship for the followers of revealed religions”—i.e., Islam, Christianity, and Judaism—a number of legal and institutional provisions and policies contribute to discrimination against the country’s Christian population. Egypt requires that its citizens carry national identification cards; these cards, which have a required religion field (though a recent change now allows a dash instead of selecting from Islam, Christianity, or Judaism), create room for possible discrimination against citizens who are stopped by the police or are attempting to get government services. Additionally, despite some calls for a unified law to govern the construction of all houses of worship, in August 2016, the House of Representatives passed the Church Construction Law, which maintains distinct construction procedures for churches and delegates the authority of approving building, renovation, and expansion permits to provincial governors, contributing to a number of procedural hurdles.

A disproportionate number of all blasphemy charges are brought against the country’s Christian population. Article 98(f) of Egypt’s Penal Code punishes “blasphemy,” which forbids “insulting or denigrating the heavenly religions.” A study by the Egyptian Initiative for Personal Rights found that 41 percent of all blasphemy cases brought between January 25, 2011, and December 31, 2012, were against Christian defendants; the same report found that sentences were significantly harsher in cases against Christian defendants. Blasphemy charges have continued to be brought during the Sisi presidency. In May 2015, for example, four Coptic students and their teacher were arrested and charged with blasphemy after making a video mocking the Islamic State. In February 2016, the Idku Criminal Court sentenced three of the students to five years in prison, the maximum sentence for blasphemy charges, and referred the fourth to a punitive juvenile institution. The teacher was sentenced to three years.

Accountability for much of Egypt’s Christian population has been lacking. In numerous cases of sectarian violence against Christians, authorities have often opted to participate in customary reconciliation sessions rather than investigate and litigate the case before the official judicial system. Because of a lack of set procedures, these sessions have resulted in numerous due-process violations throughout the years; at times, rather than punish perpetrators of sectarian violence, these sessions have forced Christian victims to vacate a village in order to ease sectarian tension. In the official judicial system, justice has been elusive as well. In response to the October 2011 Maspero massacre, in which dozens of mostly Christian protesters were killed and hundreds injured, only two cases were brought to trial. One case before the military court system tried three officers, ultimately sentencing two of the men to two years in prison and one to three years. In the other case before the criminal court system, two Coptic men were sentenced to three years in prison for reportedly stealing weapons from the armed forces. Despite dozens of witness testimonies and video footage documenting armored vehicles running over protesters and the use of tear gas and live ammunition during the Maspero massacre, no high-ranking military or security officials have been held accountable.

Trend Analysis: While public displays of support for Christians such as Sisi’s attendance at mass and the reconstruction of churches destroyed in 2013 are welcome signs, the tangible situation for Christians has remained relatively unchanged in the past decade.

Implications: The marginalization and discrimination against Egypt’s Christians not only represents a failure to adhere to constitutional obligations to protect freedom of religion but has also contributed to sectarian sentiments that are reflected in extremist ideology and violence against Christians. Without deep efforts to reform the legal framework and education system, ensure accountability for sectarian acts (whether committed by state or citizen), and allow for more opportunities for Christians in public and political life, it is unlikely that the situation will improve. Additionally, an economic downturn and a constriction of public space inherently affects marginalized groups more negatively than others: Christian development organizations in Upper Egypt who serve the low-income community face the same constraints as civil society elsewhere, and ultimately it is the most vulnerable who will suffer. The alignment of the pope and certain segments of the Christian community who see Sisi as a better alternative to the Brotherhood has also led to divisions within the church and has posed an obstacle to addressing the aforementioned issues. 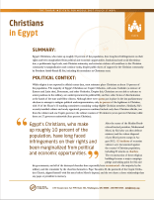