Background: Syria’s Legislative Decree No. 30 of 2007, formally called the “Flag Service Law,” (herein referred to as the “Conscription Law”), governs compulsory and reserve military service, and was issued on May 16, 2007 by President Bashar al-Assad. The Conscription Law has been amended on numerous occasions, most recently in July 2019.

Summary: The Conscription Law regulates the duties and conditions of compulsory and reserve military service in Syria. Men between the ages of 18 to 42 are required to serve, and women may enlist voluntarily. Conscripts are required to serve for 18 to 21 months, depending on their level of education. The Conscription Law permits deferrals for compulsory service for different categories of people, including certain types of students, individuals with specialized degrees, and those suffering from temporary health conditions. Exemptions are permitted for certain individuals, including those who are the only male child in their families, those deemed unfit for health reasons, and those who are residing abroad and who have paid an exemption fee. Per the Conscription Law, individuals who have completed their compulsory military service and have not exceeded the maximum draft age are considered reservists; the law details four categories of reservists and the contexts in which they can be called up for particular duties. Individuals who evade or desert their deployment face financial and legal repercussions.

Significance: By establishing compulsory military service and creating an expansive pool from which to draw reservists, Syria’s Conscription Law makes military service a central element of the relationship between the Syrian state and the civilian population. With active hostilities ongoing for over eight years, this reality has been particularly underscored. In the absence of any ability to conscientiously object from conscription and with the legal scheme being applied in a discretionary manner, the regime has used conscription as a tool of punishment and power consolidation, rather than to establish a culture of service to protect the nation. The legal scheme and practices around conscription remain key considerations that will affect the lives of Syrians, including those considering whether to return to Syria in the wake of draft dodging and desertions, or those traveling inside Syria amid a growing number of checkpoints and conscription campaigns, in addition to Syrians deciding whether or not to sign reconciliation agreements with the regime. This also bears implications for the policies of other nations on issues ranging from refugee return to normalization.

Legal Context: Article 46 of the Syrian Constitution states that “compulsory military service shall be a sacred duty” and that “defending the territorial integrity of the homeland and maintaining the secrets of state shall be a duty of every citizen.” Legislative Decree No. 18 of 2003 (known as the “Military Service Law”) governs the administrative and structural components of the armed forces more broadly.

Prior to the current law, Legislative Decree No. 115 of 1953 formerly governed conscription. Syria’s Conscription Law has been amended a total of 13 times since it was issued—nine times since protests began in March 2011 (2011, 2014, 2015, 2016, three times in 2017, 2018, and most recently, in 2019). As men have left the army or avoided deployment during the war, the Syrian regime has issued separate amnesty laws, including in 2014, 2015, 2016 and 2018, to grant deserters and draft dodgers amnesty from prosecution if they turn themselves in within a set period of time; those who are granted amnesty are still expected to complete their mandatory conscription.

Political Context: Over the last eight years, the Syrian army has lost many of its soldiers to mass casualties, desertion, draft dodging, and defection. Armed forces were numbered at about 330,000 before 2011, and experts now estimate that only 20 to 25 percent of the army remains. The regime has taken a number of steps to make up for its gutted military including launching conscription campaigns, setting up checkpoints across the country to catch those avoiding conscription, arresting men for service, raiding homes to find individuals to forcibly conscript, issuing amnesties to entice deserters and draft dodgers to return, and releasing propaganda content, including a March 2018 video titled “Braids of Fire,” which spotlights voluntary female conscripts in an attempt to “shame” men into enlisting. The regime also continues to rely on external and irregular forces, including but not limited to Hezbollah, Russian, and Iranian Revolutionary Guard Corps fighters.

During the war, the regime has kept some conscripts in the army despite the completion of their compulsory service. In July 2019, a social media campaign entitled “We want to be discharged” resurfaced after two years. The campaign, which first appeared in 2017, calls for the discharge of soldiers who had been fighting beyond their required service. There has been no reported demobilization order in response to this most recent campaign, but state media agency SANA previously reported two demobilization orders in 2018. There have also been some reports of men above the age of 42 being called in for service and being kept beyond the maximum age.

Displaced Syrians have expressed significant fears of conscription, particularly as the Idlib offensive continues and as the regime calls in individuals for emergency military service despite promises of amnesty. As recently as late 2018, an order listing 400,000 names—including names that had been cleared for amnesty—was issued. Accordingly, it is very likely that many—particularly those who consider themselves dissidents—may not trust the Syrian regime to honor its promise of amnesty. Furthermore, considering increasing reports that individuals who have been signing reconciliation agreements with the Syrian regime have been forcibly conscripted, or in other cases, arrested, tortured, assassinated, or killed, there are no assurances that returnees will be safe. As host countries begin to consider whether or not to extend their refugee and temporary protection programs amid a determination on country conditions in Syria and as countries consider how to engage with the Syrian regime, conscription is a pertinent theme. With individuals who have signed reconciliation agreements put into the midst of some of the most dangerous battles and conflict zones, it is likely that protracted battles and high casualty counts may continue.

Throughout its implementation, the Conscription Law has led to higher levels of corruption within the military sector. As some conscripts are legally able to pay an exemption fee in order to avoid compulsory conscription, this has allowed corruption, bribery, and discretionary application to rise both prior to 2011 and during the war as well.

Adherence to Legal Norms: Syria’s constitution and its international legal obligations do not explicitly recognize a right to conscientious objection—the right to refuse to perform military service on the basis of an individual’s freedom of thought, conscience, and religion. However, Syria has acceded to the International Covenant on Civil and Political Rights, which protects the right to freedom of thought, conscience, and religion, from which conscientious objection has been argued to be a derivative right. A compulsory military conscription scheme in which individuals may find themselves forced to serve without an alternative, and in egregious extension of even the domestically established maximum time period for compulsory conscription, likely occurs in violation of this right. With many Syrians hesitant or unwilling to join a military that has engaged in attacks against fellow citizens, at least a proportion of draft dodgers or deserters may be considered conscientious objectors.

Furthermore, the broad application and discretionary interpretation of the Conscription Law by Syrian authorities, as well as the practices around conscription—including but not limited to the raiding of homes to facilitate this, and the use of the conscription scheme to continue attacks against Syrian civilians by the Syrian army—call into serious question Syria’s domestic and international legal commitments and implicates mass crimes of the most serious nature.

Text of the Decree:  The official text of the decree is available in Arabic here. 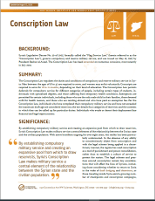