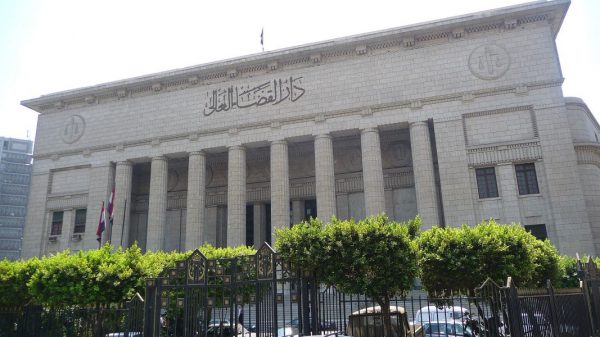 Background: On August 15, 2015, the Counter-terrorism Law was published in the Official Gazette and went into effect. It had previously been approved by the cabinet on July 1, 2015, during a period in which there was no sitting parliament. The law was retroactively approved by the House of Representatives in a hasty process that involved the  review of 341 decrees in 15 days once the legislature reconvened in January 2016; per the Egyptian Constitution,  legislation passed in the absence of a sitting parliament must be discussed and approved within the first 15 days following the legislature’s seating.

Summary: The Counter-terrorism Law sets forth the official state definitions for a terrorist, terrorist act, and terrorist financing using vague language that is subject to broad interpretation. Per the law, a terrorist act is defined as “the use of force, violence, threats or intimidation, at home or abroad to disturb the public order, to endanger the safety and security of the community … to harm individuals … to put the rights and liberties of individuals at risk … to harm national unity and security … to obstruct the interests of the government … and to impede the implementation of the Constitution.”

The law establishes a number of significant punishments including life imprisonment and death sentences for founders and heads of terrorist organizations, five-year prison terms for propagating “ideas and beliefs calling for the use of violence” or inciting terrorism through social media, and fines of 200,000–500,000 Egyptian pounds for publishing “false news” about terrorist acts or counter-terror operations. The law also establishes procedures for the prosecution of terrorism, including the creation of a specialized circuit to try all terrorism cases and expanded monitoring and surveillance authority during the investigation of an alleged terrorist crime.

Implications: By writing into law a broad definition for terrorism and creating new prosecutorial and judicial mechanisms, the Counter-terrorism Law expands the scope of acts that can be tried as terrorism; subjects even nonviolent, constitutionally protected actions of everyday citizens, journalists, and rights defenders to possible prosecution under terrorism legislation; and contributes to a culture in which national security concerns automatically trump human rights and legal obligations.

Legal Context: The Counter-terrorism Law interacts with a number of preexisting pieces of legislation including:

Political Context: The law, which had been on the drafting table for months prior, was approved speedily by the cabinet within 24 hours of the funeral of Prosecutor-General Hisham Barakat—who was assassinated on June 29, 2015—at which President Abdel-Fattah El Sisi promised “to amend the law to allow us to implement justice as soon as possible.”

Adherence to Legal Norms: The international legal community recognizes the right of every nation to take effective counter-terrorism measures. While there is no definition for terrorism that is agreed upon internationally, broad and vague definitions have been found to violate international law.

The United Nations General Assembly has affirmed that states “must ensure that any measure taken to combat terrorism complies with their obligations under international law;” that any restrictions on derogable rights, such as freedom of assembly and expression, adhere to a strict set of guidelines; and that non-derogable rights, such as the rights to life and freedom from torture, cruel, or inhuman or degrading treatment, be respected under all circumstances. When implemented in a broad manner, the Counter-terrorism Law is very likely to implicate a number of rights, including but not limited to the rights to life, expression, assembly, privacy, due process, and freedom from torture, cruel, or inhuman or degrading treatment, thus raising questions on the country’s constitutional, regional, and international legal obligations.

On a procedural level, because the Counter-terrorism Law was ratified in the absence of a parliament and hastily approved without discussion when parliament was ultimately seated, the manner via which it was passed very likely violates Article 156 of the Egyptian Constitution. 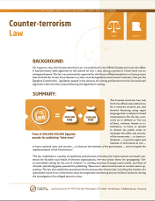