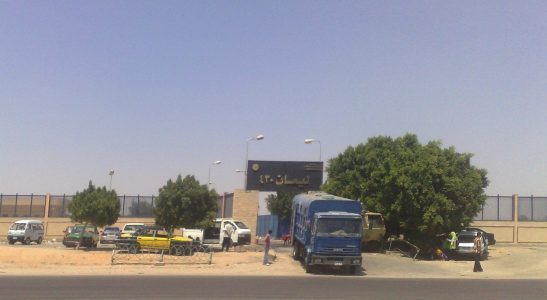 Summary: In September 2016, the Arabic Network for Human Rights Information estimated that there were about 106,000 detained persons in Egypt, though ANHRI noted these were modest estimates. Detainees in Egypt have been held in a variety of facilities including prisons, police stations, as well as in secret and illegal locations (like military camps and central security camps).  Reports of torture and maltreatment, inadequate access to medical care, overcrowding, and neglected facilities continue to be made by detainees, civil society organizations, and independent monitors. Egyptian authorities have consistently denied these reports of poor prison conditions.

Implications: The poor state of Egyptian detention centers, combined with the mass incarceration that Egypt has seen in recent years, constitutes violations of human rights en masse, without access to justice, further normalizing and entrenching these abject conditions. These conditions have led to the death of detainees, as well as serious and collective physical and psychological trauma that additionally constitute a public health and humanitarian crisis. These concerns also have implications for security; academic literature cites overcrowding in prisons as a factor most often present in prison radicalization, along with relative deprivation, and feelings of injustice. Mass incarceration also has reverberating economic and gender implications; the vast majority of Egypt’s incarcerated population is male, often leaving women in the role of sole family caretaker and breadwinner.

Trend Analysis: While detention conditions in Egypt have historically been problematic, these concerns have been underscored by the recent high rates of incarceration. With over 106,000 detained persons, Egypt ranks among the highest rates of incarceration worldwide; the country has expanded its prison facilities in response to growing incarceration rates by building at least 19 prisons since 2011. Inhumane treatment in detention facilities has fluctuated based on periods of mass arrests, but has continued overall. For example, following the mass arrests leading up to the constitutional amendments referendum in the first quarter of 2019, El Nadeem noted 115 individual cases of torture, nearly half of the same statistic in all of 2018 (262 individual cases of torture).

Legal Context: Detention facilities in Egypt are governed primarily under the Prisons Law and Prisons Regulations Law, both of which outline detention conditions in accordance with human rights standards; however, various articles within the Prisons Law grant authorities excessive discretion to mistreat detainees. In 2015, for example, amendments to the Prisons Law granted personnel at detention facilities authority to use force against detainees who attack personnel, attempt to escape, physically resist, or refuse to obey prison regulations.

Per Egypt’s constitution, its domestic laws, and its international legal obligations, authorities must guarantee that detainees are not subject to torture or physical and mental harm and that detainees are held in documented detention facilities that do not violate the dignity of an individual and that meet clear humanitarian and health-related standards. Laws and practices that subject detainees to torture, poor prison conditions, and a deprivation of dignity all occur in violation of such.

Political Context: In the first six months of 2019, the El Nadeem Center for the Rehabilitation of Victims of Violence and Torture, an Egyptian rights organization, documented 28 detainee deaths, 90 cases of inadequate access to medical care, and 213 individual cases of torture of persons held in Egyptian custody.

In Egypt, detainees are often placed in overcrowded and unsanitary cells. Many detention cells are filled beyond capacity, with detainees often kept in extremely closed quarters. Some detainees have been placed in solitary confinement facilities for periods of over 23 hours per day, which rights groups have stated amounts to a form of torture. Despite decrees from the Ministry of Interior granting detainees in pretrial detention specific furnishings in their cells, such as bedding supplies, water jugs, and kitchen utensils, most facilities that house them do not provide these items. Detention conditions in police stations face the same issues, overcrowded well past their capacities. Additionally, detainees in camps operated by the military and Central Security Forces have reported similar cases of solitary confinement and physical abuse, including some cases of forced disappearances. Detainees in their cells lack access to clean water, which is deliberately cut off by prison administration, and are forced to use buckets rather than traditional bathroom facilities.

Substandard detention facilities have exacerbated the medical conditions of some detainees, often leading to compounded issues. In June 2019, former president Muhammad Morsi died in a courtroom after suffering from liver disease and diabetes; Egyptian authorities had refused to provide him with proper medical care despite international outcry about his health prior to and following his death. In the 16 months since he was first detained, former presidential candidate and opposition figure Abdel Moneim Abul Fotouh had to increase his medications by threefold and suffered two heart attacks in June 2019, subsequently denied appropriate medical treatment.

Detainees are also denied proper access to legal representation and family visitation. Families have been prohibited from visiting detained relatives and prevented from providing their detained family members with meals, despite regulations granting them permission to do so, forcing detainees to buy food from detention canteens that are generally underserved, not nutritious, and costly. Detainees are also often denied the ability to meet with their lawyers.

Egyptian government officials regularly deny reports of torture, mistreatment, and poor conditions in prisons and praise the overall quality of detention facilities. This includes the state-affiliated National Council for Human Rights, which as an institution has praised the conditions at detention facilities, although some of its individual members have been more critical. In 2016, the Human Rights Committee of Egypt’s House of Representatives criticized the Ministry of Interior for reported inhumane prison conditions and human rights violations. The Ministry of Interior subsequently denied the violations and sent a report to the committee clarifying the allegations. International entities, such as the United Nations and European Union, have expressed concern over detention conditions in Egypt in the past; these comments have been dismissed by Egyptian authorities as politically-charged and lacking credible information. 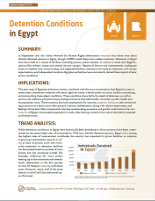