Summary: In recent years, the United States Congress and the Senate in particular have, through a series of hearings, statements, and appropriations bills, raised their concerns over the effectiveness of U.S. assistance to Egypt, focusing on end-use monitoring and human rights vetting of U.S. equipment, the Egyptian government’s intensifying crackdown on human rights and civil society, and scorched-earth counter-terror tactics, among other issues.

In August 2017, President Donald Trump’s administration withheld and reprogrammed nearly $300 million in foreign assistance to Egypt (including $195 million in military assistance for fiscal year 2016 withheld on the basis of democracy and human rights conditions), citing Egypt-North Korea relations and human rights as the primary reason.

By May 2018, Congress and the Trump administration appeared to be potentially on the same page, with Egypt at risk of its FY17 military assistance falling below $1 billion for only the second time since 1983 because $65.7 million of it was reprogrammed in August 2017 and another $105 million was withheld by the Senate, as well as because of the possibility that Secretary of State Mike Pompeo decide withhold another $195 million in conditional aid tied to democracy and human rights conditions. However, in August 2018 alone, the administration released nearly $400 million in withheld military assistance ($195 million in FY16 and $195 million in FY17).

This indicates that the Trump administration is not making democracy and human rights issues a priority in its relations with Egypt, while the Senate is, thus far, continuing to take action pursuant to its concerns, yielding the significance of the FY19 appropriations process.

Egypt’s foreign assistance is primarily broken down into two[1] categories: economic support funds (development programs, abbreviated as ESF) and foreign military financing (military assistance, abbreviated as FMF). Ahead of final FY19 numbers in the Omnibus, the following presents ESF and FMF allocations and conditions in Senate and House FY19 appropriations bills, and analysis of trends and expectations in Egypt’s aid package.

The committee report is a supplemental document to the bill which includes additional context and requirements.

In recent years, an increasing number of voices in Congress have raised concerns over the effectiveness of U.S. aid to Egypt. Specific issues of concern (particularly in the Senate) include but are not limited to:

In late 2017 and early 2018, it appeared that both the administration and the Senate were taking action pursuant to these concerns.

But although the Senate continued along this trajectory in 2018, the Trump administration reversed its course. 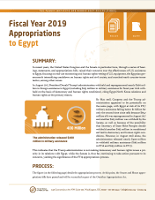