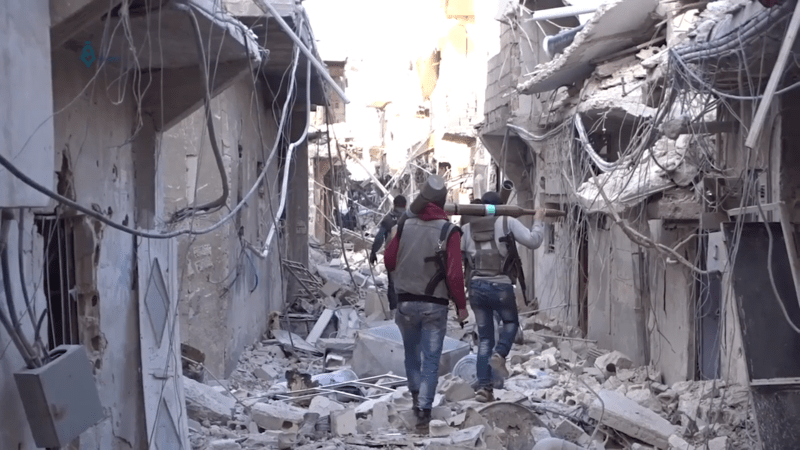 Qaboun is one of the cities that the Assad regime has slated for redevelopment under Law No. 10 (Wikipedia).

Background: Syria’s Law No. 10 of 2018, which has significant implications for the property rights of Syrians, was ratified by President Bashar al-Assad on April 2, 2018, and, following widespread condemnation, amended on November 11, 2018.

Significance: With more than half of Syria’s pre-war population displaced from their homes in areas across Syria and outside of it as well as factors preventing displaced persons from being able to safely return, Law No. 10 furthers a legal scheme that is likely to result in many Syrians’ dispossession of their rightfully owned properties and the formalization of the forced displacement and population engineering initiated by the Assad regime and its allies during the war. Assuming that property owners even have documents to help prove their ownership—a fact that cannot be taken for granted amid displacement, war, and systematic land registry destruction—most displaced owners will be physically unable to return to make property claims.

Although allowing family members “up to the fourth degree” to make property claims may help create additional opportunities for displaced persons to gain access to and claim their land, some concerns remain regarding the way that land disputes will be settled in the absence of documentation. Further, those who remain wanted by the government may fear retaliation, arrest, or forced conscription and may hesitate to return or have family members submit property claims on their behalf.

With reports indicating that previous redevelopment schemes by the Assad regime have disproportionately targeted opposition strongholds, there is concern that Law No. 10 could similarly be used to punish members of the opposition for standing against the regime. Coupled with the lining of pockets that Assad regime cronies may enjoy as a result of being awarded redevelopment and reconstruction deals enabled as a result of Law No. 10, this legislation will have significant implications for housing, land, and property (HLP) issues in Syria.

Legal Context: Law No. 10 is not the first of its kind, nor the only HLP law that the Syrian regime has at its disposal to repossess and redevelop land. In 2012, the Syrian regime issued Decree No. 66 of 2012—the predecessor of Law No. 10—which allowed Syrian authorities to “redevelop areas of unauthorized housing and informal settlements” in two specifically designated locations in Damascus. Other relevant HLP laws include Decree No. 63, which authorizes the seizure and expropriation of moveable and immoveable property belonging to those deemed to be terrorists (defined per a vaguely worded counter-terrorism law); Decree No. 11 of 2016, which halts property registration in areas affected by the “emergency security situation;” and Law No. 3 of 2018, which governs the removal of “rubble,” a term that is not defined and which residents have stated has been improperly applied to areas not in need of demolition and reconstruction.

Political Context: Throughout the war, the Syrian regime employed siege, starvation, and bombardment tactics to forcibly displace Syrians from their homes. Numerous reports would then surface that pro-government Syrian and Iranian settlers would be allowed to informally and illegally take over homes in former opposition strongholds once the original civilian residents were forcibly displaced, contributing to a policy of forced demographic change and population engineering by the Assad regime. Additionally, and before Law No. 10 was issued, widespread reports of home demolitions and inadequate compensation for those dispossessed of their properties were systematically documented.

More recently, with the Assad regime attempting to frame itself as the victor of the war, it has begun announcing that that the country is ready to reintegrate its displaced population and it has begun shopping around the world for reconstruction assistance. As part of its rhetoric, the Assad regime has labeled Law No. 10 as an “urban renewal law” that is meant to put together a war-torn country and rid the nation of informal settlements, entirely refusing to recognize the significant implications that the law has for Syrian property rights.

Adherence to Legal Norms: Under its obligations per the International Covenant on Economic, Social, and Cultural Rights, Syria is required to protect the right of an individual to adequate housing; the Universal Declaration of Human Rights further states that no one shall be arbitrarily deprived of his property. A legal scheme which threatens to justify the destruction and demolition of homes and to forcibly evict and dispossess individuals of their legally owned properties, while reinforcing and formalizing the impact of the egregious human rights violations and serious international crimes that have occurred throughout the Syrian war, is cause for significant concern. In the analysis of one group of eminent jurists, Law No. 10 “has the potential to turn the process of reconstruction into a form of ethnic cleansing … [and] appears to entrench breaches of international human rights law and international humanitarian law.”

Implementation: Because there are numerous HLP laws which enable the Assad regime to demolish and redevelop areas, the precise law or decree under which a specific demolition and redevelopment takes place is not always clear. However, in November 2018, a regime official announced the schedule for the application and implementation of Law No. 10 in al-Qaboun, Barzeh, and Jobar, areas previously considered to be opposition strongholds. As legislation like Law No. 10 and other HLP laws begin to be implemented in areas of Syria now controlled by the Assad regime, reports in which property owners have been prohibited from visiting their properties or in which property ownership claims have been made subject to security clearances have surfaced. 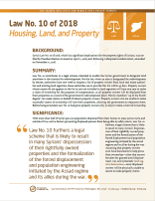