Background: Law No. 19 of 2012, Syria’s Counter-terrorism Law, was ratified by President Bashar al-Assad, published in the Official Gazette, and went into effect on July 2, 2012. It had been approved by the parliament on June 28, 2012.

Summary: Syria’s Counter-terrorism Law establishes the official definition of a terrorist act using broad language: “every act intended to create panic among people, disturb public security, damage the infrastructural or institutional foundations of the state, that is committed via the use of weapons, ammunition, explosives, flammable materials, poisonous products, or epidemiological or microbial instruments … or via the use of any tool that achieves the same purpose.”

Significance: By furthering an all-encompassing definition of terrorism, the Syrian regime equips itself with a legal tool that can be interpreted broadly as criminalizing not only horrific acts of terrorism but also peaceful human rights activity and dissent; contributing to a climate of fear in which everyday citizens may hesitate to partake in constitutionally and internationally protected activities; and enabling the dispossession of individuals’ rightfully owned properties as a result of a procedurally questionable legal process. Because of the extent to which this law and other counter-terrorism measures were used throughout the Syrian war against civilians, fear remains that they may continue to be used long after the war ends, severely hampering the ability of some Syrians to return to their homes and others to remain in their country without fear of prosecution, arrest, and, in some cases, execution.

Legal Context: Syria’s Counter-terrorism Law paved the way for numerous pieces of complementary counter-terrorism legislation to take hold. Ratified less than one month later, Law No. 22 of 2012 established the Counter-terrorism Court (CTC) to hear terrorism cases implicating both civilians and military individuals; although the law grants a defendant’s right to a defense, it also states that the CTC is not obligated to adhere to the regular trial and due process standards set forth by Syrian law. In September 2012, Legislative Decree No. 63 of 2012 authorized authorities, before a case is referred to trial or a verdict is issued, to take measures including the seizure of an accused person’s moveable and immoveable property and the issuing of travel bans in cases involving crimes of national security and crimes under the Counter-terrorism Law.

Political Context: In April 2011, and following popular protests that began in mid-March that year, the Syrian regime lifted the state of emergency that had governed the country for 48 years; a decree one year later brought an end to the Supreme State Security Court. Despite these steps, Syrian intelligence and security officials continued to subject tens of thousands of civilians to arbitrary arrest, egregious detention conditions and torture, and procedurally problematic legal and judicial processes. In practice, Syria’s historic state of emergency was effectively replaced by the 2012 Counter-terrorism Law. The practices of security and intelligence officials continue today.

Adherence to Legal Norms: International legal standards and norms recognize the right of a country to take effective counter-terrorism measures. However, vague and broadly worded definitions for terrorism have been found to be violative; as the Office of the United Nations High Commissioner for Human Rights has stated, “Too wide or vague a definition may lead to the criminalization of groups whose aim is to peacefully protect … human rights.” Syria’s Counter-terrorism Law, which adopts a broadly worded definition and has been used to prosecute peaceful dissent and human rights activity, clearly violates this standard. Speaking specifically about Syria’s Counter-terrorism Law, the spokesperson for the High Commissioner has described the legislation as “broad and ill-defined.”

The U.N. General Assembly has further affirmed that states “must ensure that any measure taken to combat terrorism complies with their obligations under international law,” that any restrictions on derogable rights such as freedom of assembly and expression adhere to a strict set of guidelines, and that non-derogable rights such as the rights to life and freedom from torture be respected under all circumstances. Syria’s Counter-terrorism Law is regularly applied in legal proceedings that interpret the definition of a terrorist to also include the exercise of constitutionally and internationally recognized rights like freedom of assembly and expression, that rely on confessions brought about as a result of torture, and that produce severe punishments including the death penalty. This calls into question a number of derogable and non-derogable rights. Accordingly, Syria has enshrined and implemented its counter-terrorism legislation in a manner that contravenes both domestic and international law.

Implementation: Since 2012, there has been little documentation on the degree to which Syria’s Counter-terrorism Law and accompanying legislation have been used to prosecute individuals who have committed violent terrorist activity. The fact that the war continues, more than half of the country’s prewar population has been forced to flee, and the Assad regime has not prioritized militarily fighting terrorist groups like the Islamic State raises questions on how the law has been applied. There is, however, both qualitative and quantitative data to indicate that the Syrian regime has regularly used the Counter-terrorism Law, along with Law No. 22 of 2012 and Legislative Decree No. 63 of 2012, against nonviolent civilians. As early as One of the most prominent human rights defenders tried by the CTC was Mazen Darwish, head of the Syrian Center for Media and Freedom of Expression; he faced charges for “publicizing terrorist acts” under the Counter-terrorism Law for his human rights monitoring and documentation work.

Individuals and organizations who have engaged with the CTC explain that lawyers are often prohibited from seeing their clients before a case begins—affecting their ability to adequately represent them—and that CTC judges—who do not enjoy immunity for actions taken during the course of their work—tend to act in a politicized manner. Observers of the court have noted that trials are not public, juveniles have been tried before the CTC, confessions brought about as a result of torture are admissible before the CTC, and individuals brought before the court include but are not limited to persons accused of participating in protests, writing statements on Facebook, and delivering aid to opposition-controlled areas.

As investigations and trials before the CTC have continued, so has the issuing of property seizure orders and travel bans in a nearly automatic fashion. As recently as 2018, individuals who had their property seized per Decree No. 63 of 2012 had not been provided with notice and had not been afforded an opportunity to challenge the decision. Syrian nongovernmental organizations continue to document cases of property seizures, many of which have targeted individuals who have opposed the Syrian regime and occur amid the application of a larger set of housing, land, and property laws that have collectively enabled the state to sell assets by auction, re-exert control over land, and pave the way for lucrative reconstruction and investment deals.

Text of the Law: An official text of the law is available in Arabic here. 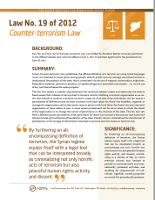