Summary: After the Syrian regime violently cracked down on protests that began in March 2011, many nations cut diplomatic ties with Syria and the Arab League suspended Syria’s membership. In 2015, the United Nations Security Council unanimously adopted Resolution 2254, which requires Syria to undergo a “political transition” led by the Syrian people to end the war. More than eight years after protests began, the Syrian regime has largely defeated rebel forces, and is now seeking to reenter the international community and to rehabilitate its image in order to begin bringing about reconstruction assistance and foreign investment. Despite concerns about the international legal implications involved in normalization, states have taken a variety of stances on relations with the Syrian regime. Some have embraced Syria under President Bashar al-Assad, citing a need for stability or seeking new economic opportunities, while others have refused, fearing that failing to hold the Syrian government accountable for abuses would legitimize authoritarianism and destabilize the country and the region.

Political Context: As fighting becomes localized to only a few areas in Syria and President Bashar al-Assad remains in power, some countries have begun to re-establish ties with Syria formally and informally. Omar al-Bashir, who was then president of Sudan, visited Syria in December 2018, constituting the first visit of an Arab leader to Syria since the war began. That same month, Chairman of Egyptian General Intelligence Abbas Kamal hosted Chairman of the Syrian National Security Bureau Ali Mamluk to discuss political developments. In addition to resuming diplomatic visits with Syrian officials, some Arab nations have reopened their embassies in Damascus. The United Arab Emirates reopened their embassy on December 27; the next day, Bahrain issued a statement iterating that its embassy in Syria would continue its work. In January 2019, the foreign ministry of Jordan appointed a new chargé d’affaires at the Jordanian embassy. In the same month, the Italian foreign minister announced that Italy was considering reopening its embassy in Damascus, although a majority of European Union member states have discouraged recognition of the Syrian government until there is a meaningful political transition.

Though Syria’s return to the Arab League was not discussed at the most recent summit in early April 2019, some representatives from Arab nations have made statements in favor of readmitting Syria into the Arab League. Following meetings held between Assad and Iraq’s foreign minister in December 2018, Iraq announced that it supports Syria’s readmission to the group. The Moroccan, Lebanese, and Tunisian foreign ministers have expressed support for Syria to rejoin the Arab League, while Egyptian Foreign Minister Sameh Shoukry has stated that Egypt has no conditions regarding Syria’s return. Major General Saad al-Gamal—a member of the Egyptian House of Representatives and deputy speaker of the Arab Parliament—announced that he hoped Syria would return to the Arab League quickly after Hammouda Sabbagh, speaker of the People’s Council of Syria, attended the Arab Parliament summit in Amman on March 3, 2019.

Countries and international corporations have begun resuming economic relations with Syria as well. Tunisia has resumed direct commercial flights to Syria, while Jordan has allowed planes to fly in Syrian airspace. Jordan reopened the Nassib border crossing, against U.S. and E.U. policy, allowing trade to resume with Syria. While Egypt has not reestablished full diplomatic relations, Egypt and Syria cooperated on several industrial and agricultural projects in 2018, and Egypt has sold Syria weapons that have been used in the war against civilians. A French tourism company has begun offering cultural tours of regime-held areas of Syria, and a group of 35 European and Canadian tourists arrived in Syria in March 2019 to tour the historical sites at Palmyra. Russia and Syria have proposed to UNESCO to restore the ruins at Palmyra with UNESCO funding. Belarus and the Czech Republic continue to provide the Syrian regime with humanitarian funding and supplies. The Assad regime hopes to attract investors to fund the reconstruction of the nation: Syrian businessman Muhammad Hamsho, blacklisted by the U.S. Treasury Department and the E.U., led a business delegation to the U.A.E. to encourage Emirati private-sector investment in Syria. An economic conference is being planned for November 2019, to take place in Lebanon, in which reconstruction of Syria is expected to be a major topic.

Despite the many avenues through which the Syrian regime is increasingly becoming normalized, there are also countries and entities maintaining their distance and encouraging others not to engage with the regime. The E.U. has applied major sanctions on businesses and business executives involved with rebuilding Syria. . The U.S. Congress is currently considering the Caesar Syria Civilian Protection Act of 2019, which, if passed, would sanction foreign persons who provide financial, material, or technical support to certain entities present in Syria, or foreign persons who sell or provide certain services or goods directly to or for use by the Syrian regime. Since the start of 2019, Saudi Arabia, Qatar, and Turkey have all made announcements that they will not normalize relations with the Assad regime.

Legal Context: The debate around normalization of the Syrian regime occurs amid a larger international legal conversation. While most discussions of international law center on the obligation of a state not to violate the rights of its citizens within its territory, legal scholars are increasingly developing literature around the obligations of “third states” not to facilitate, support, or encourage a state’s violations of international law. Additionally, international legal standards around business dealings and investments continue to be developed, such as the obligation of states to prevent third parties from interfering or impairing with the enjoyment of certain rights or the U.N. Guiding Principles on Business and Human Rights. Accordingly, states considering the resumption of relations with the Syrian regime, whether through tourism deals or the provision of reconstruction support, would do well to keep these obligations in mind, in addition to any existing national legislation or sanctions that may be in place.

An additional legal factor that affects normalization of the Syrian regime is the matter of accountability. As Syrians become displaced to countries around the world and the war affects citizens globally, victims are increasingly resorting to national legal systems to hold Syrian perpetrators of human rights violations—the vast majority of which belong to the Syrian regime—accountable. Criminal and civil cases around the world have been brought in countries ranging from the United States to Spain. In 2018, Germany and France issued arrest warrants against the head of Syrian Air Force Intelligence Jamil Hassan. France additionally issued warrants against director of the National Security Bureau Ali Mamluk and Abdel Salam Mahmoud, who is in charge of the Air Force Intelligence Investigative Branch at Mezzeh Military Airport.

Finally, normalizing relations with the Syrian regime may result in the premature—and, in some cases, involuntary—return of refugees from countries opting for normalization, despite a domestic legal landscape in which returnees (and all Syrians) may face imprisonment, forced military conscription, or deprivation of their property. (For more on the laws and their implications, see our Return of Refugees issue brief.)

Trend Analysis: As fighting in Syria becomes localized to only a few areas and the Syrian regime works alongside its Russian ally to send a message that the war has come to an end, it is likely that countries and businesses may increasingly begin to normalize relations with the Syrian regime.

Implications: While some countries and entities regard normalization of the Syrian regime as an opportunity to pursue business interests or to close the book on the Syrian war, others believe doing so may come at the cost of a lasting political solution and accountability for the mass atrocities committed by the Syrian regime during the war—some of which continue even today. For example, some European countries with right-wing governments including Italy, Hungary, and Poland, are in favor of normalization because they view Assad as a source of stability and a necessary factor to ending the refugee crisis that swept Europe. Some of the Arab countries in favor of normalization may be doing so to assert influence in the country to counter the close relationship that has formed between Syria and Iran in recent years. Others still may consider normalization in pursuit of business interests or investment opportunities.

Countries and entities against normalization, however, iterate various reasons for such, from accountability for human rights violations, to adherence to Resolution 2254, to the belief that the current Syrian regime will be unable to guarantee stability—a reality that may continue to have larger regional implications. There is fear that by normalizing the Syrian regime without subjecting regime leadership to consequences, neighboring authoritarians may be empowered to partake in similar wide scale atrocities against their people. Finally, normalization will have implications for the return of refugees; while normalization itself may lead countries to bring to a close their temporary immigration and refugee protection programs, it also creates an environment in which refugees may have no choice but to return to Syria—even if country conditions remain dangerous for them. 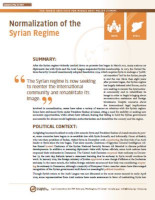