The medina of Tunis (photo via Christopher Rose on Flickr)

Liberty of conscience and freedom of belief are fundamental rights enshrined in the 2014 Tunisian Constitution. However, after the revolution, public morality offenses have been consistently used against those who do not conform to some of the country’s religious and cultural customs. Article 226 and 226 II of the Tunisian Penal Code relate to defaming public morality and public indecency, and provide for prison terms of up to six months for such offenses.

Even though Tunisia has long been characterized by its seemingly tolerant image, prosecutions and consistent police harassment of those who choose not to conform to the dominant religious identity of the country in the name of “public indecency” and “defaming public morals” have been a common practice after the revolution. The year 2017 signaled an unprecedented rise in arrests related to public indecency, with a series of charges against individuals eating during Ramadan, and a couple arrested in October for kissing inside a car. These incidents led civil society to react and form an advocacy network called the Collective for Individual Liberties. Also that year, Mouch Bessif (“Not Against Our Will”) was the first protest to publicly call for the basic right to abstain from fasting in Ramadan. Although 2018 has not yet seen a similar rate of arrest or police harassment, civil society has continued to organize to demand the right to eat during Ramadan. One member of parliament called for the abolition of a regulation on the closure of nearly all cafés during the month, but was rejected by the interior minister, who stated that “the minority should respect the rules of the majority.”

While there are no existing documentary reports about application of public indecency laws during former president Zine al-Abidine Ben Ali’s era, the incidents characterized the post-revolution period and were also initially used during Ennahda’s rule against bloggers and those who criticized the government. These arrests were considered by some as politically motivated.

Police harassment and prosecutions over public morality charges were considered by the public and civil society groups as extremely controversial following the revolution. A broad interpretation of Articles 226 and 226 II of the penal code can lead to prison terms of up to six months for a meal, a drink, or a cigarette during the fasting hours of Ramadan, although there are no articles in Tunisian law that explicitly prohibit these activities. In 2015, five policemen were sanctioned for “abuse of power” following their violence towards customers when they raided a café that was open during fasting hours.

Incidents of prosecution of individuals over public morality charges during Ramadan were markedly more frequent in 2017, and in these cases police acted with impunity. At least five people were convicted in June 2017 for eating in public during Ramadan, including a homeless man smoking a cigarette according to Amnesty International. Additionally, two artists were harassed by police and accused of eating in public. These acts were considered by authorities as defamatory to public morals according Articles 226 and 226 II of the Tunisian Penal Code.

The 2017 public morality prosecutions tended to be more arbitrary and gave police the role of “guardians of religion” and “public morality”—terms undefined by law but which continue be invoked in criminal cases. While being both the judge and the witness in a lot of these cases, police abuse of power was frequently reported in testimonials by the accused, and included the use of harsh language, shaming, and other verbal harassment. The broadness of public morality laws gives police authorities the power to decide, immediately and on their own terms, what is perceived to harm “good morals,” regardless of later confirmation from the judiciary.

Such prosecutions have not been limited to non-observance during Ramadan, but are also used to control citizens’ personal relationships (especially with those from the opposite sex), using the same articles of the penal code that allow the police to define based on vague grounds what is publicly acceptable and what is not. Public displays of affection, such as kissing in public, have also been interpreted as acts of public indecency, and this law was used by authorities in prosecuting individuals.

This was the case when a couple was arrested in October 2017 for kissing in a car. The man, who holds French and Algerian citizenship, was sentenced to a prison term of four and a half months, though he was liberated after spending two and a half months behind bars. His Tunisian companion was sentenced to a three-month prison terms. The “kiss affair” raised a lot of controversy in Tunisia and a debate about an ultra-conservative police and judiciary. In addition to public morality charges, the couple was accused of “offending a public official” when they allegedly challenged the police officers’ statements. The lawyer reported that his client, the French-Algerian, was denied a lawyer during the early phases of pretrial detention and was forced to sign a document in Arabic, a language that he did not understand.

Accompanying a foreigner (commonly applied when the foreigner is from the opposite sex) in a car without declaring it to the respective area of police office is another tool that public officials use to harass individuals. Although this practice has no legal basis in Tunisian law, it remains frequent, especially during late night hours; police claim that the Tunisian person needs to declare the foreigner’s stay to the local police station.

Beyond the abuse of individual rights, such targeting brings associated security concerns. This was true in the prominent case of Sofiane Chourabi, a blogger and a public figure emblematic of the Tunisian revolution. The Islamic State apprehended Chourabi, and claimed to have beheaded him in Libya in 2013—one year after being charged for “offending public morals” in Ramadan when he was allegedly found with empty beer cans on a beach. The case raised great controversy in the media and may have led later to his targeting by the Islamic State in Libya, during an investigation mission about smuggling goods to Tunisia.

While Article 1 of the constitution indicates that Islam is the religion of the state, Article 2 defines Tunisia as a civil state based on citizenship. Article 6 of the constitution guarantees freedom of conscience or belief and the free exercise of religious practices for all Tunisians.

Arrests that violate the personal freedom of individuals are also in striking contradiction with Tunisia’s fight against jihadist terrorism and efforts to combat radical thinking. Furthermore, as the case of Chourabi suggests, charging individuals for moral offenses may also serve as a pretext or justification for extremist groups to target journalists, artists, and activists.

These public morality laws are harmful to Tunisia’s status as one of the most progressive countries in the Arab world where “freedom” was an essential demand of the revolution and a dominant value highlighted in the constitution. The vagueness related to the application of two somehow contradictory identities—Tunisia as a democratic, secular state, versus Tunisia as a Muslim state, “guardian of religion”—and the arbitrariness associated with these measures have led to conflict and incoherence in the law.

Infringements on personal freedoms are harmful to minorities and any who choose not to conform to the practices and customs of the majority and are incoherent with international human rights standards and the Tunisian Constitution. To protect personal freedom, authorities should ensure that the penal code is amended and consistent with the text and the right respecting spirit of the 2014 constitution. 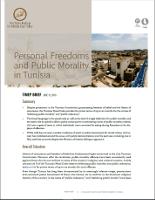