Background: Egypt’s Protest Law, Law No. 107 of 2013, was ratified by President Adly Mansour on November 24, 2013, after initially being approved by the cabinet on October 10, 2013, during a period in which there was no sitting parliament. The law was retroactively approved by the House of Representatives in a hasty process that involved the review of 341 decrees in 15 days once the legislature reconvened in January 2016; per the Egyptian Constitution, legislation passed in the absence of a sitting parliament must be discussed and approved within the first 15 days following the legislature’s seating. In 2017, the Protest Law was amended; the amendment, initiated by the cabinet, was approved by the House on April 10, 2017. It went into effect after it was ratified by President Abdel-Fattah El Sisi and published in the Official Gazette edition dated April 30, 2017.

Summary: The Protest Law requires that organizers of protests made up of 10 or more participants notify the police station in whose jurisdiction the protest would take place between three and 15 days in advance of the protest. The law also prohibits “violations of general security [or] public order … as well as calling for disrupting public interests.” The law grants the Ministry of Interior the authority to cancel, postpone, or change the route of a protest if there is credible information regarding a national security threat; however, a 2017 amendment made it so that the ministry could only enjoy such authority if it first submitted a request to the judiciary that was then affirmed. The Protest Law authorizes security forces to use water cannons, batons, and tear gas to disperse protesters who refuse to leave protests found to be occurring in violation of the law. The law also sets forth a number of punishments, including a penalty of 10,000 to 30,000 Egyptian pounds, for holding a protest without proper prior notification.

Significance: By establishing a required notification procedure at least three days in advance of a protest, the Protest Law constrains the ability of citizens to peacefully demonstrate. The vague language with which the law prohibits “violations of general security” and the authority granted to the Ministry of Interior to request cancellations and postponements of protests create a system through which Egyptian authorities can quite easily ban entirely peaceful protests under the guise of national security.

Legal Context: In December 2016, the Supreme Constitutional Court held that Article 10 of the Protest Law, which originally granted the Ministry of Interior immediate authority to cancel or postpone a protest without judicial review, was unconstitutional; this provision was ultimately amended, approved, and ratified in 2017 to require the court’s review. In the same decision, the court rejected challenges regarding the constitutionality of Articles 7, 19, and 8 of the Protest Law, which, respectively, prohibit and establish punishments for “violations of general security [or] public order … as well as calling for disrupting public interests” and detail the required notification procedure for protests. In addition to the Protest Law, protesters can also be prosecuted under the Assembly Law of 1914, which remains in effect to the present day, despite controversies regarding a historical repeal. In January 2017, a Ministry of Interior decree also imposed a no-protest zone of 800 meters around vital government institutions. In October 2017, the prime minister issued a decree that allows certain crimes to be tried by state security emergency courts; these crimes include violations of the Protest Law and the Assembly Law of 1914.

Political Context: The Protest Law was approved and ratified just months after the Republican Guard clashes and the dispersals of the Raba’a al-Adaweya Square and Nahda Square sit-ins. Additionally, the Protest Law came into force in the context of an expanded uptick in popular protests and demonstrations in the wake of the January 25 Revolution.

Adherence to Legal Norms: The significant limitations set forth by the Protest Law and the vague language it uses contravene Egypt’s constitutional obligation to respect the rights of citizens to organize demonstrations and peaceful protests, as well as Egypt’s international legal obligations to honor the right to peaceful assembly, as laid out in the International Covenant on Civil and Political Rights and the African Charter on Human and Peoples’ Rights.

Implementation: As of September 24, 2016, independent monitoring initiative Daftar Ahwal had documented more than 37,059 cases of arrest per the Protest Law, including the infamous Shura Council Case. In that case, 21 individuals were arrested and ultimately sentenced to prison terms between three and five years and fined LE100,000 each for their involvement in a 2013 protest that called for an end to the military trials of civilians. More recently, in September 2017, a group of Nubian activists were arrested for allegedly violating the Protest Law when they took to the streets for a peaceful singing demonstration to demand their constitutionally guaranteed right to return; their case is ongoing and is being heard by the Aswan Misdemeanor State Security Emergency Court. 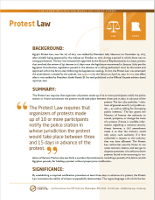