As of August 2019, the Office of the United Nations High Commissioner for Refugees (UNHCR) reported that it had registered over 5.6 million Syrians as refugees outside of Syria and estimated that there are 6.2 million internally displaced people within the country’s borders. Most Syrian refugees reside in neighboring countries: Turkey hosts 3.6 million refugees, Lebanon hosts 929,000, and Jordan hosts 662,000. With much of the active hostilities inside Syria having come to a halt save for in the northwestern region, foreign governments and international institutions are beginning to rethink their refugee programs; they are assessing whether Syrian refugees will be able to safely, securely, and voluntarily return home and whether returns should be facilitated by the international community. As of June 30, 2019, a total of 179,118 refugees were reported to have returned to Syria since 2016—most of them from Turkey, Lebanon, Iraq, and Jordan, with smaller numbers from Europe and North Africa. While there is little data on the fate of most returnees, substantial anecdotal evidence has emerged of harm to refugees who return, including forced military conscription, signature of restrictive reconciliation agreements, arrests, torture, and even death.

Syrian refugees displaced by the war face a number of hardships in their host countries. In Lebanon and Jordan, over three-quarters live below the poverty line, 87 percent of refugees living in Lebanon are in debt, and many survive in abysmal conditions in refugee camps, without proper access to nutrition, medicine, education, or protection from the elements. The Lebanese government restricts the sectors in which Syrians can work, limiting opportunities for employment. In Turkey, an estimated one million refugees work without a permit, known as a “kimlik,” allowing some Turkish employers to exploit their labor for low pay in poor conditions. Refugee children are often not registered in school, or face obstacles to enrollment due to overcrowding or the lack of legal status or needed documents. Refugees in Lebanon face eviction and discrimination by the local police, and refugees in the region and in the West face political and societal anti-refugee sentiments that have manifest in inhospitable environments and even violent acts.

Around the world, policies governing the status of refugees are currently in flux. In 2018, Germany offered financial assistance to more than 400 Syrians returning home, though this program has since been discontinued. While Temporary Protected Status for Syrians in the United States has been extended through March 2021, reports have surfaced that the Trump Administration may slash new refugee admissions to zero and a travel ban prohibiting Syrians from entering the country remains in effect.

In Turkey, the governor of Istanbul recently announced that Syrian nationals registered in any governorate other than Istanbul will have until October 30, 2019, to return to their original, registered governorate. Turkish authorities have also adopted a “stop and search” program detaining anyone without a “kimlik.” According to Syria TV, 4,380 people have been deported from Turkey back to Syria since the beginning of July 2019; some of those arrested by Turkish authorities were sent to Syria after being forced to sign documents stating that they were returning “voluntarily.” In Lebanon, government practices are similarly raising alarm; in December 2018 in Arsal, Lebanese security forces arrested Syrians living in camps and forced many to sign promises to return to Syria. In April 2019, the armed forces issued an order forcing refugees to demolish any concrete structure over a meter high and in June 2019, refugees in Arsal were forced to demolish their own homes. In a meeting the following month, Lebanese Foreign Minister Gebran Bassil stated that there is no justification for the great majority of the refugees staying in Lebanon and that they must return fast.

The number of Syrians returning home has increased since previous years. In 2018, 56,047 refugees returned to Syria, an increase from the 50,900 who returned in 2017 and the 28,320 who returned in 2016. The reasons behind these returns have been diverse and dependent on the individuals in question. According to a 2017 study by the IOM that surveyed over 600,000 Syrians both returning from other countries and internally displaced, 39 percent of refugees perceived an increase in economic stability in their home region within Syria or a decrease in economic opportunity in their host region, and listed this as their reason for returning. More than a quarter of refugees returned to Syria to secure their belongings and property. While the majority of refugees return for economic security, 11 percent returned for cultural or familial reasons, and the same share returned because fighting had ended in their home region.

However, many Syrians remain unable to safely return home and resume their livelihoods. While much of the fighting inside Syria has stopped, violence in northwestern Syria continues to escalate. Between late April and late July 2019, 450 civilians were killed and 452,623 displaced. Reports regarding government forces disappearing, torturing, and killing returnees continue to surface. Between July and November 2018, the government of President Bashar al-Assad, without a stated reason, arrested 700 Syrians returning to government-controlled areas, and arrested 50 children accused of having “revolutionary ties.” A June 2019 survey covering 350 returnees reported that 75% of them had experienced arrest; harassment at government checkpoints, registry offices, and in the street; as well as conscription despite promises of exemption. The Syrian military has forced people living in formerly rebel-held territories to sign coercive “reconciliation agreements” that extract information from civilians and demand that they never engage in any form of protest or dissent against the Assad regime. Former “reconciled” rebel fighters have also been conscripted and made to participate in the ongoing regime offensive in Idlib and Hama Provinces. The government has violated the protections in these agreements by arresting former opposition leaders. Additionally, military-age men are being forcibly conscripted, and conscripts have had to serve beyond their required time period.

Syrian infrastructure continues to be unable to support the current population’s needs, and an estimated 11.7 million Syrians remain in need of humanitarian assistance within the country’s borders; in some Assad-controlled regions, Syrians experience power and gas shortages. Syrians returning to regions formerly controlled by the Islamic State, now under the control of the Syrian Democratic Forces in northeastern Syria, have had to rebuild their destroyed homes in an area devoid of infrastructure. In other areas, Syrian homes have been destroyed in the conflict, or their property reclaimed by the Syrian government and appropriated for other use. Four-fifths of Syrians live below the poverty line, and unemployment figures vary: World Bank estimates put youth unemployment at 78 percent, the Central Intelligence Agency places unemployment at 50 percent, and the International Labor Organization puts unemployment at 15 percent. Many Syrians who remained in Syria during the war view those who fled with suspicion and fear that associating with returnees could incriminate them. At the end of February 2019, the U.N. Independent International Commission of Inquiry on the Syrian Arab Republic determined that continued hostilities and a lack of rule of law “render safe and sustainable return of displaced Syrians impossible.”

While at times Assad has called on refugees to return, at other times, Syrian government actions or policies have sent a different message. For example, former Jamil Hassan, head of Syrian Air Force Intelligence, had previously stated: “A Syria with 10 million trustworthy people obedient to the leadership is better than a Syria with 30 million vandals.”

In addition to establishing the official definition for a refugee, the 1951 Convention Relating to the Status of Refugees establishes the principle of non-refoulement—the right of refugees not to be expelled from a host country or returned to a state if he or she “would be threatened on account of his [or her] race, religion, nationality, membership of a particular social group or political opinion.” Non-refoulement is considered to be a principle of customary law, which makes it mandatory for all states, irrespective of whether or not they have signed the 1951 convention. Per the convention, states are also obligated to afford refugees the same rationing system that exists for nationals; to provide housing “as favorable as possible” and not less favorable than that accorded to alien residents; and to afford the same level of elementary education afforded to nationals, among other things.

On the domestic front, the Assad regime has recently adopted or continued to implement a number of legal measures that raise concerns regarding the safe return of Syrian refugees and the resumption of their livelihood in peace. These laws include Law No.19 of 2002, under which peaceful dissidents and journalists have been prosecuted for terrorism; housing and property legislation including Law No.10 of 2018 which threatens to dispossess Syrians of their land and further the demographic changes initiated by the war; and the legal scheme around military conscription, including Legislative Decree No. 30 of 2007.

With active hostilities becoming specific to only a few regions in Syria, refugees continuing to face difficulties in their host countries, and governments beginning to reconsider their asylum, refugee, and immigration policies, it is likely that the number of refugees who return to Syria will continue to rise. Because the return of refugees is strongly linked to a perception of the war having come to an end, it may be that the rising number of refugees returning under potentially harmful conditions will facilitate the normalization of the Assad regime, the willingness of governments to collaborate with Syria with regards to diplomatic relations and investment, and a greater likelihood of more host governments ending their refugee programs, regardless of guarantees on legal and safe return for all.

At present there is insufficient information to fully and comprehensively understand the nature of the risk for returning Syrian refugees, though numerous pieces of anecdotal evidence, as presented above, raise serious concerns. Without increased scrutiny on practices for informing refugees of the conditions and vulnerabilities they may face upon return, and without improved data collection on the situation for refugees who have returned, it is nearly impossible to guarantee that refugees may make a fully-informed and independent decision to return. Should governments and international institutions prematurely encourage returns, refugees may feel pressured or forced to return to an environment that they do not have sufficient information about or that may end up being unsafe, unstable, or even life-threatening for them—raising serious moral and international legal considerations. 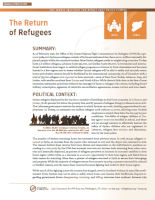