Summary: The right to housing in Egypt has been marred by issues of access to adequate housing and by forced eviction at the hands of both the government and other citizens. At least 40 percent of housing is in informal areas. After citizens are evicted, they frequently report inadequate access to services in new areas; these reports are often ignored or repressed. Furthermore, civil society members and housing activists have endured reprisals for their efforts, most recently following engagement with the United Nations special rapporteur on the right to housing during her country mission to Egypt.

Political Context: Evictions by the government have occurred both in the name of establishing  security, as was the case with the displacement of thousands of families during the creation of a buffer zone on the border with Gaza, and in the name of economic development, as with displacements where the government has planned massive development and modernization projects. When relocation by the government has occurred in the wake of such projects, many families have suffered from a lack of appropriate compensation for dispossessed property and have not been provided adequate access to services in their new communities.

In June 2016, President Abdel-Fattah El Sisi opened the first and second stages of the Tahya Masr housing project, which is aimed at transferring the population in ”areas of risk” in Greater Cairo to al-Asmarat neighborhood. In 2017, the government began attempting to clear one of these areas, al-Warraq island, of its inhabitants to promote new development initiatives and housing projects. Residents of the island contested the government’s plans, which would force them from their homes and cause significant economic hardship. Sisi has asserted that the island is unauthorized for legal residency and forced evictions continue. After a June 2018 government decision to establish new development on the island, an ongoing legal battle ensued and residents have continued  to mobilize. including by preventing security personnel from disrupting a ferry traveling to the island in December 2018. A verdict is expected in March 2019 for the lawsuit filed by the island’s residents contesting the government’s development project. Prime Minister Mustafa Madbouli issued a decree in November 2018  designating “100 meters around both sides of the Rod al-Farag Bridge in the Warraq island area” and “areas located in the 30-meter range of the island’s perimeter will be expropriated to establish a corniche” for public use—a decision that will likely result in the demolition of homes and displace current residents in the area. Similarly, in the summer of 2018, residents of Cairo’s Maspero neighborhood (which had in 2013 been the site of participatory development plans generated through collaboration between local residents, nongovernmental organizations, government ministries, and urban development firms) were forced from their homes as part of a similar government redevelopment program. Homes and businesses in Maspero was were razed and most residents were relocated to temporary housing in al-Asmarat. A third legal contest emerged in the Nezlat al-Siman neighborhood of Giza in January 2019, where residents protested government demolition crews destroying commercial properties as part of the region’s development plan. At least 30 residents were detained, with 18 facing charges of illegal assembly, resisting authorities, and assaulting a police officer.

The al-Asmarat construction works, which include about 11,000 housing units to be financed by the Tahya Masr fund, are carried out in cooperation between the fund, Cairo governorate, and the Armed Forces Engineering Authority (it is not uncommon for the armed forces to benefit from such developments and housing projects). Since the opening of the project, some 8,000 families have moved from the areas of Maspero, Manshiyat Nasser, Duweiqa, Ezbet Khairallah, and Istibl Antar to al-Asmarat. Some of these relocations have been criticized for failing to provide housing appropriate for a larger family structure (many have been moved to homes that can only accommodate a family of four) and for the means through which such relocation has taken place; at times, authorities have used force to displace families or cut off services in an area to pressure its residents to move. Additionally, because al-Asmarat is an isolated area, its new residents often lack proper access to nearby public schools, hospitals, shops, and transportation.

New housing projects, including those at Maspero and al-Warraq, fall under the authority of Egypt’s Ministry of Housing, and specifically the New Urban Communities Authority (NUCA). NUCA, which has a legal mandate to develop and sell land, has also been charged with developing Cairo’s New Administrative Capital, which is being financed with at least $1.1 billion in Chinese capital. NUCA has many times come under investigation over corruption and mismanagement allegations, most recently after serious flooding in April 2018 revealed poor planning. A 2016 report on corruption from the country’s Central Auditing Organization report described NUCA as having mismanaged funds directly to its leaders benefit; the head of the auditing body, Hisham Geneina, was fired from his post soon after the report was issued and later sentenced to five years in prison, while the head of NUCA at the time, Mustafa Madbouli, was promoted to the position of housing minister and is now the country’s prime minister.

Additionally, the issue of housing in Egypt at times reflects sectarian and discriminatory elements. In 2017, at least 150 Coptic families their homes in Arish following the assassination of several Coptic citizens, and a large number of Coptic families have been forcibly evicted by Muslim families in Upper Egypt. Similarly, despite constitutional protections guaranteeing the right to return to ancestral homelands, Egypt’s minority Nubian population continues to be deprived of this right as well as their general right to housing, a result of measures such as Decree No. 444 of 2014, which classifies a number of Nubian villages as military zones and prohibits residents from remaining there. Nubian activists demanding their rights to return are currently facing charges in emergency courts.

Legal Context: Article 78 of the Egyptian Constitution guarantees “the right to decent, safe, and healthy housing, in a way that preserves human dignity and achieves social justice.” However, the same article additionally indicates that “the state shall also regulate the use of state lands and provide them with basic facilities, as part of a comprehensive urban planning framework for cities and villages and a population distribution strategy.” Article 35 governing the right to private property suggests that property may not be confiscated “except for the public good and with just compensation that is paid in advance as per the law.” Finally, Article 41 outlines the state’s responsibility with regard to housing to “[achieve] balance between population growth rates and the resources available, maximizing investment in human energy, and improving its features, within the framework of achieving sustainable development.”

Although the previous constitutional articles reveal what may be a tension between the state’s responsibility to protect citizens’ rights to housing and its responsibility to provide housing as part of a development strategy, the constitution is clear on the issue of forced migration: “all forms of arbitrary forced migration of citizens are forbidden. Violations of such are a crime without a statute of limitations.” Victims may file complaints to the Public Prosecution against the police in cases of forced evictions, based on Article 370(1) of the penal code regarding violations of “residency sanctity” or based on Article 129 regarding “the use of cruelty.” However, these complaints are rarely investigated because of difficulty identifying the actual perpetrator within the police force. Challenging the government’s decision to evict and demolish can be done in the administrative court system by filing a petition, but favorable verdicts are rare and may take years to be issued, allowing the government extensive time to execute eviction and demolition plans in the interim.

In addition to the aforementioned domestic provisions, per its international obligations in the International Covenant on Economic, Social, and Cultural Rights, African Charter on Human and Peoples’ Rights, and interpretations of international law, Egypt is also mandated to recognize the right of its people to an adequate standard of living, including the right to housing, and to take appropriate steps to ensure the realization of this right.

Trend Analysis: While the right to housing has long been an issue of concern to Egyptians, the matter has become increasingly troubling, as the government has prioritized new developments over ensuring access to services and protection of rights for existing residents since new development plans were announced in 2015. While housing rights advocacy movements were spawned with great political development in 2011, these effectively could not continue after 2014, when members were arrested or new government officials refused meetings. These planned advocacy efforts have given way to spontaneous demonstrations (as at al-Warraq island in August 2017), often resulting in violence.

Reprisals against housing activists reached unprecedented levels following U.N. Special Rapporteur on the Right to Housing Leilani Farha’s country mission to Egypt in September and October 2018. Individuals who engaged with Farha on her visit faced serious reprisals, including threats and harassment, arbitrary arrest, and home demolitions, which Farha publicly condemned in a December 2018 statement that also recommended that no future special rapporteur visit Egypt.

Implications: Through NUCA, the Egyptian government has positioned itself as a primary real estate developer, providing new housing financed by foreign investments. Even where they are framed as “modernization” projects, these developments have mostly come at the expense of the existing residents, who are often forcibly evicted with little protection offered. The economic implications of these dynamics have furthered a scheme that lends itself to corruption (particularly within NUCA), as well as inflated the market price of new housing units and may risk a housing bubble and thus economic instability. In the meantime, tens of thousands of Egyptians are left with inadequate access to housing, a basic right protected in the constitution and per Egypt’s international legal obligations, and which new urban centers have historically to provide. Finally, increasingly little recourse exists to seek redress through the law or public advocacy efforts, as the government has stifled corruption investigations, violently repressed protests demanding housing rights, and carried out reprisals against those who engage with independent monitors. 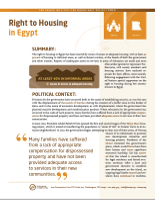