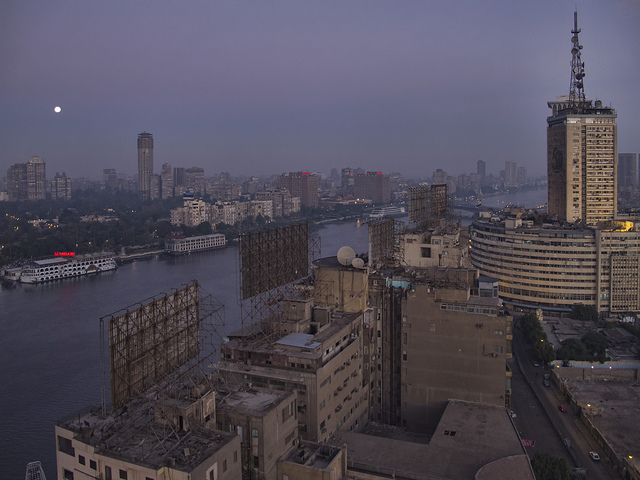 The Maspero Building serves as the headquarters for the Egyptian Radio and Television Union (Flickr user Dan Lundberg).

Background: The Law Regulating the Press, Media, and the Supreme Council for Media Regulation (SCMR), Law No. 180 of 2018, went into effect after it was ratified by President Abdel-Fattah El Sisi and published in the Official Gazette edition dated August 27, 2018. Despite opposition from the Egyptian Syndicate of Journalists when it was still a draft and concerns regarding the constitutionality of the law set forth by the State Council, the House of Representatives approved the bill in its entirety in July 2018. A list of sanctions for violations of the SCMR law were published in the Official Gazette on March 18, 2019.

Summary: The law, referred to subsequently as the SCMR Law, prevents press entities, media outlets, or websites from publishing or broadcasting content that violates the Egyptian Constitution, professional ethics, and public order or morals; calls for breaking the law; or incites discrimination, violence, racism, hatred, or extremism. It also allows the SCMR to prevent a publication from being issued or distributed from abroad if there are national security concerns. The SCMR Law prohibits press, media, and websites from publishing or broadcasting false news and allows the censorship of content found to be in violation of this prohibition. For the purposes of this false news prohibition, personal websites, blogs, and social media accounts with 5,000 subscribers or more are considered to be media outlets. In addition to these restrictions on media content, the SCMR Law furthers a regulatory scheme that subjects outlets to a number of licensing and oversight requirements, including but not limited to hefty requirements for a permit process, a prohibition on journalists and media personalities from being able to collect donations for their work, and a provision that mandates the storage of any content issued by a media outlet for a period of at least 12 months, during which the SCMR will enjoy access to such content.

Significance: The SCMR Law creates a restrictive media regulatory scheme that grants authorities broad discretion to censor or block content that is found to meet a number of vaguely phrased prohibitions. Additionally, the scheme subjects media to a number of administratively burdensome requirements that make it difficult for them to be properly licensed as well as to function effectively. By furthering this scheme, Egyptian authorities severely constrain the ability of independent media outlets, citizen journalists, and even everyday citizens who are expressing their opinions on their personal social media accounts to speak freely and to express a narrative that may run contrary to that which the government has adopted.

Legal Context: In early 2017, Sisi ratified the Law Organizing Press and Media Institutions, a piece of legislation that had created three new media regulators; following this ratification, Egypt’s parliament had been expected to pass a complementary law to govern more broadly the practice of journalism and the media field. Instead, however, the House of Representatives approved three entirely new media laws in July 2018 to overhaul the previous system: the SCMR Law, the National Press Authority Law, and the National Media Authority Law.

Political Context: The SCMR Law writes into law the government’s continued crackdown against freedom of expression and the press. At the time of the law’s passage, over 500 websites had been blocked and the government had even attempted to censor the BBC for publishing a report documenting forced disappearances in Egypt. Government officials and allies of the regime had consistently labeled media reports marginally critical of the government as “false news,” attempting to limit their credibility and maintain control over the narrative.

Adherence to Legal Norms: Egypt’s domestic and international legal obligations mandate that it respect the rights of its citizens to freedom of thought and opinion, freedom of expression, freedom of the press, freedom of publication, and the right to privacy. A legal scheme that threatens to censor even private citizens for their social media posts, severely constrains the ability of independent media outlets to become licensed and effectively function across the country without harassment, and grants broad discretion for authorities to block content that it deems to threaten “national security” very likely occurs in violation of these legal obligations.

Implementation: On October 21, 2018, the SCMR announced that it would begin accepting licensing requests from websites for a period of two weeks. This period was extended by another two weeks on November 3, 2018. Those wishing to gain legal status for websites had to register them by providing information about their purpose and ownership and paying a licensing fee of 50,000 Egyptian pounds.

In March 2019, a list of sanctions for violations of the SCMR Law were published in the Official Gazette. Sanctions include fines, disciplinary action, and the banning of distribution and broadcast when media entities violate the SCMR Law, commit libel, spread false news, or publish news contrary to the constitution, among other listed offenses. In one of the first instances of the SCMR Law sanctions being implemented, the SCMR fined the weekly newspaper al-Mashed and ordered its website blocked for six months after the SCMR claimed that the website allegedly published sexually explicit materials, disrupted public order, and insulted a female artist. Al-Mashed Editor-in-Chief Megdi Shendi attributed the punishments to an article that the newspaper published which documented extortion by security personnel against business owners in Cairo to acquire funds to be used as bribes in the April 2019 constitutional amendments referendum. In May 2019, the SCMR noted that its Drama Committee would be tracking Ramadan programming and documenting and following up on violations, including sexually suggestive language.

A report published by the Association for the Freedom of Thought and Expression (AFTE) documents the organizational structure of the SCMR and analyzes its decisions and display of political bias. 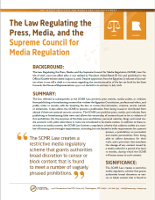