Background: The Law Regulating Road Transport Services Using Information Technology (popularly known as the Uber and Careem Law, after two of the companies most affected by it) went into effect after it was ratified by President Abdel-Fattah El Sisi and published in the Official Gazette edition dated June 11, 2018. Previously, the cabinet had referred the draft law to the House of Representatives in March 2018. Multiple joint committees were formed to debate the draft law, comprising representatives from the Budget, Communications, Constitutional Affairs, Defense, Economic Affairs, and Transportation Committees. Thereafter, the draft law was approved preliminarily by the House and sent to the State Council for constitutional review, which found issue with some provisions that established servers for the national security apparatus to directly obtain user information from ride-sharing companies. Thereafter, the provisions were edited to exclude the servers in favor of language that would permit authorities to instead request the information directly from companies. The House ultimately approved the revised draft law on May 7, 2018.

Summary: The law regulates ride-sharing companies in Egypt such as Uber and Careem and requires that they obtain an operating license and that their drivers obtain a special permit. The Uber and Careem Law also requires ride-sharing companies to store user data and information for 180 days; these companies must provide the information to the government upon request. Finally, the law sets forth a provision to help allow the integration of regular cabs into the ride-sharing scheme.

Significance: The Uber and Careem Law is significant in that it regulates ride-sharing companies for the first time in the country’s history. The law has serious implications for privacy because it creates a scheme in which ride-sharing companies must maintain user data for a lengthy period of time and provide it to authorities when asked, contributing to the state’s expansive surveillance mechanism.

Legal Context: The Uber and Careem Law was approved amid the drafting and ratification of a series of laws that restricted civil liberties and personal freedoms, including the Law Regulating the Press, Media, and the Supreme Council for Media Regulation and the Cybercrime Law. Similar to the Uber and Careem Law, both of the aforementioned laws include provisions requiring entities to store user information that can be accessed by the government upon request.

Political Context: In March 2018, taxi drivers sued Uber and Careem on the grounds that the companies were operating inside Egypt illegally; an administrative court ruled in favor of the taxi drivers. Both companies appealed the decision, which was later overturned by the Cairo Court for Urgent Matters; this decision allows the companies to operate pending a final decision from the Supreme Administrative Court—expected on February 23, 2019.

Adherence to Legal Norms: A law which regulates a new industry like ride-sharing is important for economic and investment purposes and likely fulfills Egypt’s constitutional obligations to build an economy aimed at “achieving prosperity in the country through sustainable development.” However, the law’s provisions enable the government to request user data, raising severe concerns about an individual’s right to private life and privacy—which are protected under Egypt’s domestic and international legal obligations.

Implementation: Implementing regulations for the Uber and Careem Law have not yet been issued. In January 2019, news website Mada Masr reported that negotiations between Uber and the Egyptian government over the details of the regulations had stopped after disagreement on whether the regulations should force companies to keep user data inside Egypt and allow Egyptian security agencies to obtain that data. Mada Masr also reported that Uber users had experienced interference while using the application.

Text of the Law: A link to the official text of the law is available in Arabic here. 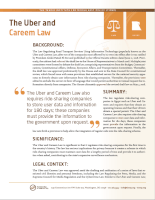