On April 23, 2019, Egypt’s National Election Authority announced that Egyptians had voted to approve a package of amendments to the constitution in a national referendum. The vote, which was announced as 88.8 percent approval with 44 percent turnout, was held just days after Egypt’s House of Representatives had finalized and approved the text of the amendments package. The referendum lacked transparency, saw widespread reports of violations and voter disenfranchisement, and came after months of concerted efforts to suppress opposition to the amendments, going as far as to jail critics and restrict web access in order to block advocacy around a “no” vote.

The amendments fundamentally alter the structure of the Egyptian state by eroding judicial authority, defining the military as the “protector of the constitution,” and restructuring presidential terms to allow President Abdel-Fattah El Sisi to remain in power until at least 2030, contributing to preexisting trends of an eroding rule of law, a shrinking public sphere, and a consolidation of executive and military authority.

TIMEP Coverage of the Constitutional Amendments: 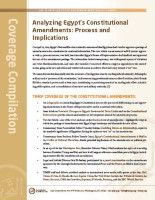