Protest outside the Egyptian Syndicate of Journalists (Face-Masr)

Egypt today is among the world’s worst offenders against press freedom. While Egypt’s current constitution enshrines a free press, bans censorship, and ensures press independence, these rights are not protected in practice. The government has frequently imprisoned journalists or blocked them from reporting. With 23 journalists in jail, Egypt was ranked as one of the top jailers of journalists worldwide in 2019 by the Committee to Protect Journalists. The government has additionally targeted critical or independent news outlets for closure, and has blocked over 500 websites, including journalistic sites. The country was Private media has also come under control of the state, notably with the General Intelligence Directorate’s acquisition of a media conglomerate that owned OnTV, al-Youm al-Sabaa, and five other media outlets. These press freedom violations have facilitated the state’s control over the public sphere, with media outlets increasingly pushed to disseminate state narratives, avoid controversial subject matter, or risk sanction.

Under former president Hosni Mubarak, journalists were pressured out of work, attacked by security forces, detained for their reporting, and arrested for covering sensitive issues or government decisions. Despite a temporary opening of media space in 2011, the Egyptian state’s violations of press freedom following the January 25 Revolution include outlet closures as well as the deaths, arrests, and sentencing of Egyptian and foreign journalists, particularly after the Raba’a al-Adaweya Square dispersal in August 2013. Security forces have also targeted journalists for organizing as part of the Journalists Syndicate, as was the case with Mahmoud al-Sakka and Amr Badr, who were arrested in May 2016 from the union’s headquarters during a demonstration protesting the cession of the Tiran and Sanafir Islands. Yet the syndicate has grown increasingly supportive of government policies in light of the tightening space for media, as three of the six available seats for the syndicate’s 2019 internal elections were filled by candidates selected by the security services. New Syndicate Chairman Diaa Rashwan, who is also chairman of the State Information Service, was also supported by security services ahead of the 2019 vote.

The government has also moved to ban privately owned and international news outlets, including Al Jazeera and the BBC, for coverage it views as biased or inciting violence. Egypt’s State Council administrative court similarly ordered in 2013 the closure of four television channels—Al Jazeera Mubasher Misr, Ahrar 25, al-Quds, and al-Yarmuk—pegged as sympathizers with the now-banned Muslim Brotherhood. In January 2015, Sisi issued a decree giving the prime minister the power to ban any foreign publication “offensive to religion.” Following a BBC report documenting human rights abuses under Sisi in early 2018, government officials motioned to suspend the media outlet’s operating license for disseminating false news, though Egypt’s Court for Urgent Matters ruled the case inadmissible. The government has also extended its censorship policies to include reasons of “morality,” as when the Supreme Council for Media Regulation banned four different entertainment programs in February 2018, including SNL Arabia.

Censorship of existing media is a common occurrence. Over 500 websites are currently blocked in Egypt, which security agencies justify by claiming that these institutions support terrorism and spread lies pertaining to the government. Katib, a news website that reported on rights issues, was blocked by Egyptian authorities in June 2018 nine hours after its website launched. Faced with the requirement to pay a licensing fee of 50,000 Egyptian pounds (LE) and submit paperwork under the 2018 media law, Katib decided to suspend its operations in November 2018, as the Supreme Council for Media Regulation could not guarantee that the blocking of Katib’s website would be lifted or that its paperwork would be accepted despite its willingness to participate in the registration process. Media gag orders are similarly used to prevent reporting on sensitive issues, and the 2015 Counter-terrorism Law forbids journalists from publishing information that contradicts official government accounts of security data; additionally, the other provisions of the law, including the law’s vague definition of terrorism, may affect the ability of journalists to report freely. Self-censorship is also common, and as early as 2014 a group of Egyptian newspaper editors signed a statement pledging to limit criticism of state institutions.

The 2018 presidential election and the 2019 constitutional referendum witnessed greater restrictions on and violations of press freedom. In 2018, six reporters were arrested in for reporting on a New York Times article detailing vote buying. While the specific charges for each journalist varied, a common component was the charge of “spreading false news in an attempt to defame the state.” Similarly, al-Masry al-Youm newspaper and Masr al-Arabia were fined LE150,000 and LE50,000, respectively, for publishing reports pertaining to the New York Times article, while the editors-in-chief at both publications were investigated. Al-Masry al-Youm replaced its editor-in-chief, Muhammad Sayyid Saleh, in April 2018, while Masr al-Arabia Editor-in-Chief Adel Sabry has been detained by security forces since April 2018 because of the report. Prior to the election, authorities arrested, threatened with military trial, and ultimately expelled the Times of London reporter Bel Trew for reportedly not possessing the proper credentials as a foreign correspondent. The crackdown during this period reached supporters of the government, as pro-state TV host Khairy Ramadan was detained for what he described as the grand sacrifices of police forces in comparison to their low salaries.

In 2019, journalists were banned from entering polling stations to observe and report on vote tallies in a nationwide referendum on constitutional amendments, and state and private media overwhelmingly encouraged citizens to approve them. In the state’s attempt to limit criticism of the proposed amendments prior to their eventual ratification, the weekly newspaper al-Mashed was fined and its website blocked for six months after it published an article documenting security personnel extorting business owners in Cairo to acquire funds to subsequently be used to bribe citizens to convince them to participate in the April 2019 constitutional amendments referendum. In its rationale for punishing the media outlet, state officials alleged that al-Mashed published sexually explicit material, defamed a female artist, and disrupted public order.

In August 2018, Sisi ratified a restrictive media law, known as the Supreme Council for Media Regulations Law (SCMR Law), which limits the operational capacity of media institutions and instills burdensome registration requirements for entities seeking to be recognized by the state. The SCMR Law prevents print or online media outlets from publishing or broadcasting content in violation of the constitution, public morals, and public order, among other criteria. The law also prohibits the publication of “false news” and designates any online account with over 5,000 subscribers as official members of the media for this specific false news prohibition. Both the Journalists Syndicate and the State Council opposed numerous portions of the law during the drafting process and review, yet there is no indication that any of their objections were addressed in the final version of the law. A list of sanctions for the law were published in March 2019, including fines, censorship, and other disciplinary actions for media outlets or individuals that violate the SCMR Law. In the two months since the sanctions were published, the Supreme Council for Media Regulations has made recommendations affecting at least 100 media entities; while it is unclear whether all of these recommendations have been implemented, they have included the halting of television programming, the blocking of websites, and the summoning of media outlets for investigation. Also in August 2018, Sisi ratified the Cybercrime Law, which requires internet providers to store user data for 180 days; this data can be accessed upon request by state authorities. The law also permits state authorities to block websites without judicial approval if content on a website is deemed threatening toward national security, constituting yet another source of potential infringement upon the ability of outlets to publish freely.

In terms of judicial proceedings, Sisi has often refused to pardon journalists, arguing that his government “will not interfere in judicial rulings,” and instead should “respect judicial rulings and not criticize them.” In August 2015, Sisi stated after a meeting with editors of various African newspapers that no journalists in Egypt are being jailed for crimes related to publishing. Egypt’s foreign minister declared in August 2015 that no journalists are in jail in Egypt for doing their job and claimed that all detained journalists have been implicated for terrorist activities or have broken the law.

While suppression of press freedoms was common under Mubarak, it has become systemic under Sisi, especially as he attempts to strengthen his control of public forums after securing a second term. Arrests of individual journalists, targeting of independent news outlets, censorship, and the passage of increasingly restrictive legislation are all designed to suppress independent news voices and criticism of state policies. Independent media outlets have been increasingly brought under state control, whether through the aforementioned coercive tactics, the military intelligence’s acquisition of a large media conglomerate, or through the creation of a climate of fear in which journalists are forced to choose between self-censorship or sanction.

The severe erosion of press freedom in Egypt has significant destabilizing implications, in the political, economic, security, and social realms. The government’s attempts to control public space ultimately do not allow for investigation into legitimate concerns over corruption, poor governance, or other political grievances, not only depriving the people of a right to information, but making remedies to these concerns more difficult to achieve. This suppression of information and promotion of only government-approved narratives also presents a distorted picture to domestic and international investors, policymakers, and others seeking to do business in the country. Finally, restriction of press freedoms contributes to an environment that discourages open debate and may encourage extremism. 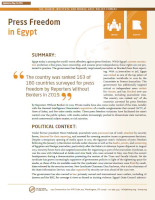